Recruiting is starting to pick up as conference play starts across the country. More competitive games means more attraction for recruits to visit.

The rest of the Pac-12 has to be pretty disappointed that USC didn't give Lane Kiffin another chance to turn things around and get a shot at the 2014 season. But the league office has to be very pleased that its most storied and powerful program has elected to make a move to maximize its potential and take the program back to where it was under Pete Carrol.

And recruits are quite happy with the decision to fire Kiffin. At least the ones I found. I've yet to find a recruit saying anything negative about the move.

Snoop Dogg's son, Cordell Broadus, a top receiver in the class of 2015, went as far as to say that Kiffin should have been fired a while ago.

"I feel that he should have been fired a while ago and USC is going to raise the bar now because the new coaching staff next year and I'm anxious to see what they are going to look like."

The most important thing for USC is not to rush the next hire. Firing Kiffin now means that recruits will not have to quickly change from one coach to another. They now know to expect a new coach, and they will keep an open mind about the Trojans. USC does not currently have a great class, but it does have some room, even with the sanctions.

Dewayne Hendrix, a four-star defensive end from Illinois, is now considering the Trojans because they fired Kiffin.

"At first, it was just Tennessee and Florida that I was looking hard at, but now that (Kiffin) got fired I am really going to look at (USC) harder," Hendrix said. "I see it as a positive because when I went to the school I liked everything, but I would have liked to have talked to him more."

Getting the right guy and going through a thorough interview process will be vital. Once USC gets that guy, he can go to work on finishing out the 2014 class, and more importantly, turning his attention to the class of 2015 -- the first year in which USC will be without recruiting sanctions, and luckily for the Trojans, a very loaded year in the state as well. 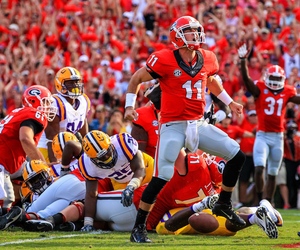 The new coach also might want to think about retaining some of the coaches on the staff, including excellent recruiters like Ed Orgeron, John Baxter, and Tee Martin. Those coaches have excellent relationships with prospects and local high school coaches, and could make the transition easier.

Perhaps the new coach can reel in Adoree' Jackson, Damien Mama or Joe Mixon? I believe most of the top recruits will wait to see who USC hires before eliminating the Trojans.

Georgia cashing in on environment

UGA came out on top over LSU in a wild shootout in Athens in front of some star recruits. It was an excellent recruiting weekend for Georgia.

It was kicked off by a commitment. as Georgia landed defensive end Keyon Brown, a four-star from Wauchula (Fla.) Hardee High School. Brown will play outside linebacker in the Dawgs' 3-4 defense.

But the good news did not stop there. Georgia made a major impression on offensive tackle David Sharpe, of Jacksonville (Fla.) Providence. Sharpe was long thought to be a Florida lean who also liked Clemson and UGA. But Sharpe tweeted something Saturday that should make UGA fans quite happy.

"@SHARPECITYY: Don't do it David Just wait until the official"

Sharpe has now visited Georgia three times on the young season, and it's easy to see that the Dawgs have made a major move for him.

"My interest in Georgia is a lot more than I expected," Sharpe said. "They are kind of peaking for me right now. They have a great group and I just love the game atmosphere there. The opportunity to play early and win games if I went there is appealing."

UGA was also hosting two other major prospects in Tennessee receiver Josh Malone, and Georgia linebacker Raekwon McMillan. While both seem to be favoring other schools (Tennessee and McMillan, respectively), the atmosphere in Sanford Stadium Saturday was simply awesome, and it could go a long way for UGA in the recruitment of both players.

Georgia has five or so spots left in its class, and it should be fill those with some great talent.

The Buckeyes had a great win over a decent Wisconsin team in front of a lot of talented recruits and a great atmosphere. Land Grant Holy Land has all the news in an awesome recap.