There's much more to a college football team's recruiting class than just what happens on Signing Day. But how a program finishes can change a lot. LSU and USC made big strides in their 2014 classes, but they were unable to overtake the Tide.

The Trojans rose from outside the top 25 in the 247Sports Composite consensus class rankings all the way up to 11th (and tops in the Pac-12), hitting on all three of their blue-chip targets.

Five-star cornerback Adoree' Jackson, five star athlete John "JuJu" Smith, and four-star offensive guard Damien Mama all picked the Trojans, as did three-star cornerback Lamont Simmons. Jackson and Mama are both considered the top players at their position in the class. Making things even sweeter, the Trojans were able to beat out rival UCLA for all three blue-chippers.

It was a close call for Smith, according to Mama.

He almost did, too:

And all that's despite the fact that head coach Steve Sarkisian just got here:

Sarkisian deserves a lot of credit for being able to pull this caliber of a recruiting class with such a limited amount of time after being hired just a little over two months ago. And he did so with limited resources as well, having just 19 scholarships in his arsenal as opposed to 25.

The Tigers ended up at second in the recruiting rankings, leapfrogging Ohio State and Texas A&M for the honor.

They did this by bringing in local five-star receiver Malachi Dupre, four-star Florida defensive tackle Travonte Valentine, three-star defensive tackle Trey Lealaimatafao, and three-star defensive end Sione Teuhema (and his younger brother, five-star 2015 offensive tackle Maea Teuhema). The Teuhema brothers flipped to LSU from Texas, while LSU beat out Florida State and Alabama, among others, for Dupre and Valentine. This completed an already-strong class that included the No. 1 overall prospect, running back Leonard Fournette.

So Mike the Tiger has something to flex about.

Nick Saban and the Crimson Tide are recruiting champions for the fourth year in a row, once again capturing the top class in the nation. On Wednesday, they stole Rashaan Evans away from Auburn (more on that later) and held off Mississippi State for three-star defensive tackle O.J. Smith (but did lose three-star defensive back Chris Williams to UCF).

The final tally has them beating out LSU 319.65-297.59 in the Composite, with the Tide's score just barely beating out last year's 319.47 as their top class in this dominating stretch (and the second-best class ever in the database, behind Florida's 2010 haul).

And that's not all. The Tide officially welcomed upperclassman Jacob Coker, Jameis Winston's backup at Florida State, as their likely new starting quarterback.

The Sooners vaulted past rival Texas for the top class in the Big 12, coming in at 14th in the nation.

After a commitment from four-star local safety Steven Parker the day before Signing Day, Oklahoma beat out Notre Dame for four-star California athlete Michiah Quick, considered the second-best player in the Sooners' class, and beat Nebraska and Arizona State for three-star tackle Kenyon Frison. They also flipped three-star offensive tackle Orlando Brown away from Tennessee in a Signing Day surprise. Brown might have been the biggest surprise, but Quick should make the biggest impact on the class -- he could play right away at wide receiver in Norman.

Making Wednesday even better, Bob Stoops announced the Sooners are also keeping former starting quarterback Blake Bell, who could add his powerful frame at tight end, and adding Texas Tech transfer quarterback and Big 12 freshman of the year Baker Mayfield as a walk-on.

The Gamecocks moved up the SEC rankings with a trio of blue-chip commitments, going four-for-four on the day. They finish up eight spots to No. 15 on the Composite.

Two of those commitments come at the cornerback position, where the Gamecocks are in dire need of contributors after losing starters Jimmy Legree and Victor Hampton to graduation and the NFL, respectively.

The Hokies managed to land three-star wide receiver Isaiah Ford (over Louisville) and four-star athlete Raymon Minor (over Marshall), but everything else went wrong for Frank Beamer's program. It's still a good class and one of the ACC Coastal's best, but Wednesday morning was not fun for Hokies fans.

It wasn't just that the Hokies missed on a couple of players. It's that they were both very good players who went to Virginia Tech's biggest conference obstacle. Four-star athlete commit Javon Harrison flipped to Florida State, which also swiped four-star defensive tackle target Derrick Nnadi.

The Bobby Petrino hiring has not paid dividends on the recruiting trail, as recruits appear to not want to play for a head coach that has left seven of his 15 jobs after just one season. Coming off a 12-win season and a dominating victory in the Russell Athletic Bowl, the Cardinals have brought in the ninth-best class in the ACC, below Pittsburgh, NC State, and Virginia and just above Syracuse and Boston College.

There was some good news, however -- three-star outside linebacker Sharieff Rhaheed picked the Cardinals over Michigan State, Missouri, and Arkansas. And Petrino's very confident in three-star quarterback signee Reggie Bonnafon, who was already committed. 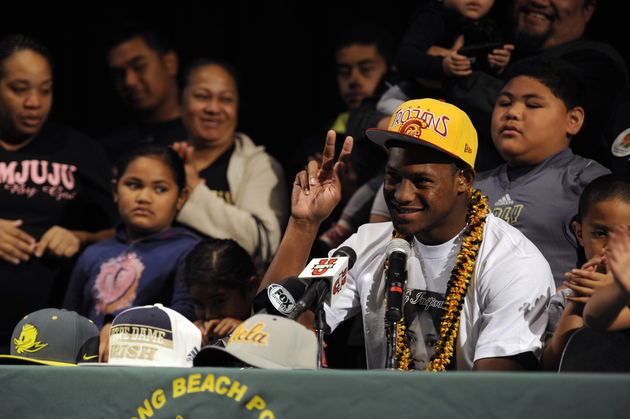 If everything broke their way, the Bruins could have risen as high as third or fourth in the recruiting rankings. Things did not, as the Bruins went one-for-eight on their big Signing Day targets, ending up with the 19th-rated class in the country (and third-best in the Pac-12). Bruins Nation calls Wednesday "extremely disappointing."

It's still a very strong class, but it's now decidedly behind archrival USC's.

There was good news for the Bearcats, as they grabbed high three-star linebacker and former Tennessee commit Kevin Mouhon.

But there was more of the bad. Three-star tight end commit Hunter Atkinson flipped to Georgia after receiving a last-minute offer from the Dawgs, and three-star defensive end commit Spencer Williams flipped to Missouri. The final tally? SEC 2, Cincinnati 1. That leaves the Bearcats in a distant third place in the AAC recruiting rankings, behind USF and UCF.

The Razorbacks grabbed a commitment from four-star wide receiver Jojo Robinson, a former Florida State commit who was also targeted by TCU and South Florida, but not much else went right for Bret Bielema's program.

After a disappointing winless opening season under Bielema, finishing third-to-last in the SEC recruiting rankings is another bitter pill to swallow. Missing on Thomas is going to sting Hogs fans for a while.

Evans was considered such an Auburn lock that the Tigers posted his bio and a welcome video on the team's official site. More than 95 percent of experts on the 247sports Crystal Ball predicted Evans would commit to Auburn, with two percent each (read: one person out of 47) predicting Alabama and Georgia.

Evans, from Auburn High School, received some audible boos from the crowd when he made his decision. He was the deciding factor in giving the Tide the edge in top-tier commitments in the state of Alabama (three of the top five to Auburn's two, five of the top 10 to Auburn's four).

Brown was considered a strong Tennessee commitment -- the three-star tackle had taken five visits to campus, had not visited elsewhere since his commit (besides a Junior Day trip to Alabama), and the Sooners were just one of a few schools to offer him late. Brown even took an official visit to Knoxville during the last weekend of January, but surprised nearly everyone by signing instead with Oklahoma.

Tennessee even left Brown on one of its official lists:

We knew coming into Wednesday that the five-star defensive end's mother did not want him to attend Michigan State. McDowell did commit to the Spartans, but has (as of yet) not yet signed his letter of intent. The top-rated player in the state of Michigan could still end up at Ohio State, Florida State, or with the Wolverines.

If McDowell ends up at Florida State or Ohio State, his destination would move into the list of Signing Day's five biggest winners. (Both had great classes. But Ohio State only added a couple pieces on Signing Day, and while Florida State picked up three blue-chips on Wednesday, it also lost a couple of its commits.)

And his Michigan State exit could also bump the Spartans into the biggest losers, since they also lost two commits to the Buckeyes and missed on four-star defensive tackle Daniel Cage.

In the strangest story of this year's Signing Day, Law sent letters of intent to three different schools. Yep -- three.

The three-star running back reportedly committed to Ole Miss, hosting a ceremony with his family decked out in Ole Miss gear, and sent letters of intent both to the Rebels and to East Mississippi Community College (due to academic concerns, he might not qualify at Ole Miss). He also signed and faxed a letter of intent to Utah -- reportedly it's where he wants to go, despite his family wanting him to end up with the Rebels.

The lack of huge surprises

Usually there are plenty of surprise selections, flips and more on Signing Day, but this year's event was fairly straightforward. Blame the increase in recruiting coverage if you like (or the advent of the Crystal Ball, which allows fans to see where experts feel recruits will end up), but this year's Signing Day wasn't as dramatic as previous years. Coaches probably appreciate that.

Who had the best and worst Signing Day, and what's your biggest surprise?

• How Signing Day could change the top 25 recruiting classes

• College football news | Yep, Alabama’s getting the No. 1 class again