Not content with recruiting from the country's most fertile region, SEC programs are getting better and better at pilfering recruits from outside of the Southeast.

Winning college football, like winning wars, is primarily about money and population.

A program that has money will be able to build facilities, hire quality coaches, and buy all of the bells and whistles that are attractive to recruits. Likewise, a program that sits close to a sizable population of blue-chip recruits will have a leg up in talent acquisition. Put the two together and you have the makings of an elite program.

Collectively, the SEC has the best collection of resources and proximity to talent. The league's famously intense fans, eople who are likely to make donations and also make their teams attractive as TV properties, are the reason why its programs are rolling in dough. The bounty of quality high school players throughout the region then ends up playing for SEC programs more often than not. Pair those two factors together and you have the best conference in the country. 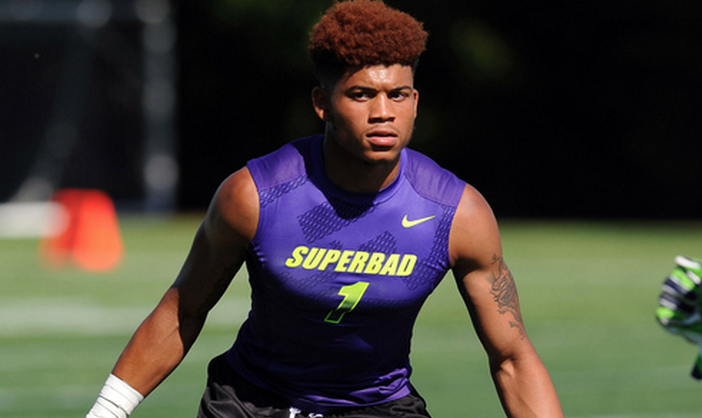 Four of 2014's 33 consensus five-stars signed with SEC schools despite not attending high school in its footprint. Florida signee Jalen Tabor of Washington DC is one. The SEC signed 19 five-stars in total. Steve Dykes, USA Today

Other places have half the pairing. Big Ten programs have fan interest and money, but not the bevy of local four-stars. Most ACC programs are the reverse; they have the proximity to talent, but they come in well behind the SEC and the Big Ten in fan support. Big 12 and Pac-12 programs tend to find themselves in the same position as the ACC, and their distance to talent depends on how close they are to the leagues' primary recruiting grounds, Texas and California, respectively. 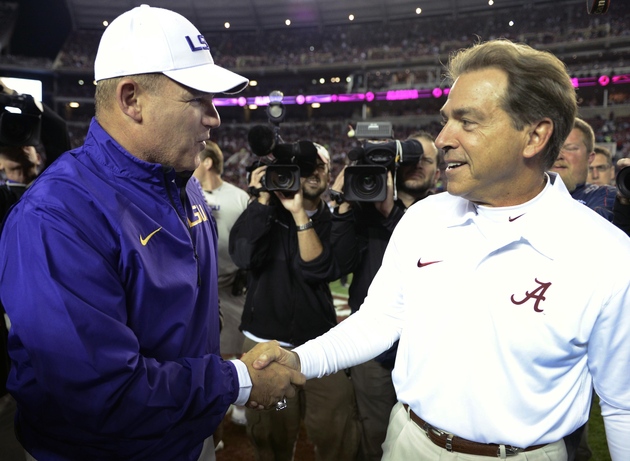 As with most rules, there are exceptions. Texas, USC, Florida State, and Ohio State check both of the boxes, while Vandy and Mississippi State don't. However, as a rule of thumb, the explanation for why the SEC is the best conference in college football (and why that preeminent position is not a cyclical phenomenon) comes down to resources and proximity to talent.

This reality can cause fans of programs in other conferences to throw up their hands and resign their leagues to second-class status. Big Ten fans (or at least non-Ohio State Big Ten fans; Buckeye backers tend to believe that their team can compete with the SEC, and it certainly can on the recruiting trail) are especially likely to offer some version of the following: "our states don't have much in the way of talent, and it's hard to get recruits to travel far from home, so we can't expect to produce teams on the level of those in the SEC." (This is a kissing cousin of the "SEC teams win because of paying players and oversigning" claim.)

The problem with the "there's not enough talent in our region" defense is that SEC teams are starting to beat Big Ten programs at their old game. It used to be that Big Ten programs were able to use their advantages in name recognition, fan support, program resources, and media treatment to make up for local talent deficits by pulling quality players from outside of the Midwest*. Now, the reverse is happening. Not only are SEC teams keeping their blue-chip players at home, but they are paying homage to J.E.B. Stuart by raiding other states for top recruits to augment their already-stocked rosters.

* The exception is again Ohio State, which over the last two years has pulled 2014 five-star Raekwon McMillan and others out of the South.

MGoBlog published an interesting piece of research this week on regional issues in recruiting. Looking at top-400 lists from 1999 to 2014, Seth made two important points. First, there have only been minor variations in the regional distribution of talent from 1999 to the present. The data do not support the popular claim that America's population shifts are rapidly hurting the Big Ten's talent resources. The league was facing the same issues with respect to proximity in talent in 2005, a season in which the Big Ten was the best conference in college football. The league was also facing these same issues in 1999, another year in which it was the best league in the sport.

Second, the Big Ten is no longer preeminent at pulling players from other regions. From 1999-2004, 36 percent of all recruits who left their regions went to the Midwest. The Southeast came second in this department at only 25 percent. From 2010 to 2014, the percentage of players who left their home regions to go to play in the Midwest dropped to 24 percent, while that figure increased for the Southeast to 28 percent. Conclusion, Seth?

And finally something matches the narrative. The Big Ten seems to be getting fewer national recruits, relying instead on a footprint that's still just average for a major conference. When the Big Ten was more than a typical major conference, it was drawing a ton of kids from California and Texas and whatnot.

This trend was fully evident on Signing Day. There's a pithy way to put it:

RT @Jake_Trotter: SEC schools signed the No. 1 players from the Big 12 states of Texas, Oklahoma, Kansas and Iowa. Ouch.

Or one can just look at the top and bottom of the SEC to make this point. According to the 247Sports Composite, Alabama signed the best player in Virginia, Iowa, and Oklahoma and the second-best player in Minnesota and Texas. Okay, you might say, Alabama is the best program in the country and can be expected to pick off five-star players from around the country, just like Florida State and USC did when they were dynasties.

Why don't we take a look at Kentucky, the team that finished dead last in the SEC? The Cats signed Thaddeus Snodgrass from Ohio, a four-star wide receiver who claimed offers from Notre Dame and six Big Ten schools. They also signed Darius West, a four-star safety from Ohio who claimed offers from Notre Dame and eight Big Ten teams. The fact that the last-place team in the SEC is able to pull from Ohio a pair of blue-chip players with offers from at least half of the Big Ten (and eight of the state's top 35 players) is a nice illustration of the point that SEC teams are now more likely that Big Ten teams to lure out-of-region players. Put another way, Ohio is supposed to be the primary recruiting state for the Big Ten, not unlike Texas for the Big 12 and California for the Pac 12, but Kentucky managed to sign more four-star Ohioans than any Big Ten program other than Ohio State.*

* - Two necessary caveats. First, Kentucky shares a border with Ohio and head coach Mark Stoops is a native, so the Wildcats signing players from the Buckeye State isn't exactly a feat of overcoming geographic hurdles. Second, Ohio State signed an outstanding class, including the five best players in Ohio, the No. 2 player in Georgia, and the No. 4 player in Virginia. This is not evidence of Ohio State getting beaten in its own backyard. Rather, it's an illustration of the shortcomings of the rest of the Big Ten.

And then there is Texas A&M. The Aggies' move from the Big 12 represented a good test for the value of the SEC brand. Texas A&M moved to the SEC in no small part to get out of the shadow of its rivals in Austin and to generate a recruiting pitch that would differentiate them from Texas. And the immediate produce of that move? The No. 5 class nationally (12 spots ahead of in-transition Texas) and total in-state dominance, coming on the heels of the 2013 No. 9 class (eight spots ahead of an admittedly much smaller Texas class).

Other than a pair of touted recruits from Arizona, the Aggies' class isn't evidence of the SEC's new tendency to lure out-of-region prospects. However, Texas A&M's success is evidence of the value of the SEC brand in recruiting. It's hard to say how much the SEC affiliation is responsible as compared to other factors, most notably: (1) a three-star recruit who turned into one of the best quarterbacks in college football history; (2) a new coach running a fun, effective offense; and (3) Texas going through the Mack Brown decline phase.

However, there's no doubt that being able to sell "come play against the best" has helped Kevin Sumlin bring top recruits to College Station. Note the shift, as charted by Team Speed Kills: 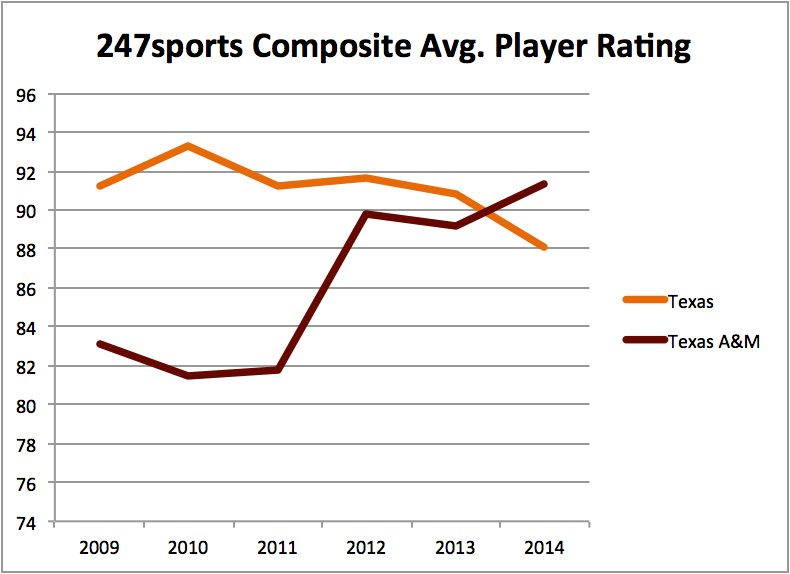 As Florida State showed in Pasadena, SEC teams are not infallible (though one could argue Florida State's an unofficial SEC team). The league's combination of recruiting success both inside and outside of the Southeast does not ensure a new string of national titles. The SEC could still eat itself alive with competing accusations of NCAA violations (assuming for the sake of argument that the NCAA is still interested in enforcing its rules against extra benefits) or see a decline in quality as a result of a succession of bad coaching hires, a.k.a. Tennessee Syndrome.

However, for the foreseeable future, the SEC will have more talent in the aggregate than any other conference, and that reality is not just a function of the number of blue-chippers in the region.