Thousands of soon-to-be sunburnt Wolverines fans loved watching a standard day of drills, but they weren't exactly the most important audience.

Share All sharing options for: How Jim Harbaugh turned a regular Michigan practice into a Florida circus

Practice didn't start until 5 p.m., but when I pulled up 90 minutes early, hundreds of fans were waiting outside the gate to grab prime seats and watch Michigan's practice at an elite football finishing school with facilities nicer than many colleges.

Once again Harbaugh had found a way to keep the Wolverines in the spotlight, this time by having spring practice during spring break at the most talented high school in the county.

Michigan invited fans to come, but it really was not about the fans, who had to sit in the Western-facing bleachers, so many looked primed to get sunburns. And once the sun went down, the temperature dropped into the 50s, unseasonably cool for Florida and unpleasant for the many tourists who had worn shorts.

There was no MC to announce what was happening at the practice, no highlights or replays shown on the Jumbotron and no announcer to tell fans who the players were as they made plays. There were no cheerleaders or anyone to lead the crowd in whatever cheers Michigan does, or even a small brass ensemble to play "Hail to the Victors." Harbaugh did not give a speech. There was no pictures-and-autographs session.

It was just a regular old boring football practice -- as sloppy and dominated by defense as almost any other spring practice.

And Michigan fans ate it up anyhow.

An elderly crowd, even by Florida tourist season standards, packed the high school stadium with roughly 5,000 fans. At one point an announcement had to be made for everyone to scoot to the center and make more room. Security guards had been told to expect it to be a standing-room only crowd, and it was close. Michigan fans made sure to put on every piece of maize and blue they owned.

"I had to park a half-mile away," said Paul of nearby Sarasota, a Michigan transplant who watched the Wolverines for a few hours.

Maybe it's because I cover college football for a living, but the prospect of watching a practice is simply not that exciting to me. I figured some Michigan transplants would likely come out to watch. What I did not expect was the huge numbers of snowbirds, some of whom even managed to convince their significant others to take a day of their vacation to watch a football practice.

Not a game, not a scrimmage, but a practice.

At the top of the bleachers in shorts, braced against the press box wall to duck the unexpectedly cold wind were Kevin Van Kirk and Tom Callison, two Michigan residents who winter in Naples and Cape Coral, respectively. Their wives did not make the drive.

"There are so many people who visit down here from Michigan," Van Kirk said of the traffic that stretched for miles.

Both were surprised at the lack of spectacle.

"After the Signing of the Stars event, you didn't know what to expect," Callison said. "You get down here, and it's just a practice."

Another thing that made sense was the huge number of Detroit Tigers hats. The baseball team is in spring training in Lakeland, just 90 minutes away. Many Michiganders winter in the area to escape the cold and watch some diamond action.

And where you find Michigan fans, you'll find Ohio State fans to remind them that the Buckeyes beat Big Blue 42-13 in Ann Arbor.

What the crowd showed me, beyond the fact that people are starved for college football, is that Harbaugh has already inspired cult-like devotion.

"We may not be there yet," Van Kirk said. "But it's obvious he's taking Michigan back to the top."

Take Kyle Davis, a college freshman from Flint on his spring break who drove three hours. 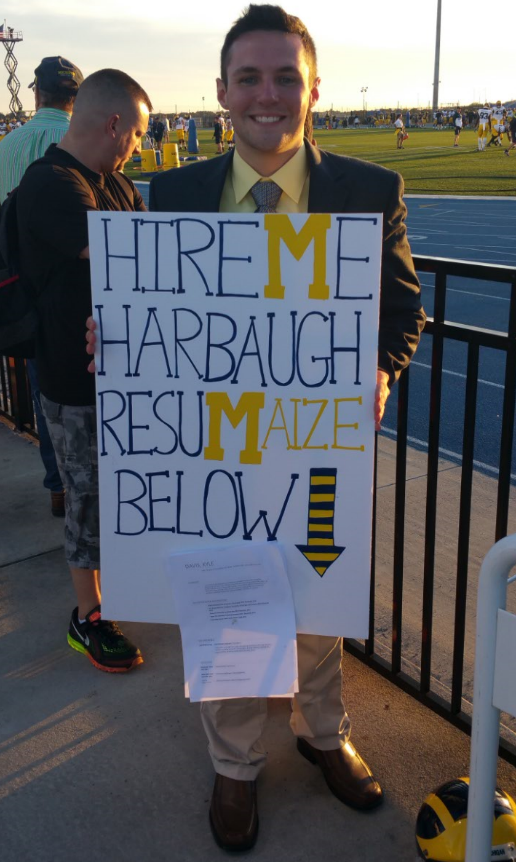 What does Davis want to do with Harbaugh?

"I don't really have one specific area, as long as it's a foot in with Harbaugh," Davis said. "I'm into marketing. Would be cool."

Unfortunately, Harbaugh had not acknowledged the signage the last time I saw Davis on Friday.

"But I plan to be at every single game, hopefully at the tunnel. I haven't seen anyone do stuff like this before. He loves commitment and competition, and he's going to see my commitment to this and hopefully ... call me?"

What it was actually about, was recruiting.

From a training perspective, practicing at IMG does not offer any real benefit over staying in Ann Arbor. Michigan didn't spend an incredible amount of money just to come down and have fun. It came to increase its brand presence in Florida and show a commitment to recruiting the Sunshine State. It has signed nine players from Florida over the last two recruiting classes.

Michigan is recruiting extremely well under Harbaugh, but having been around multiple national title teams in person, it's clear to me and other analysts in attendance that the Wolverines are probably another class away from joining the super elite in size and speed.

And a great place to find that speed is Florida, and not just at IMG.

There weren't many recruits or high school coaches visible to the public. IMG was having its parents' weekend, where parents come to the boarding school to spend time with their kids and meet other families. So I spotted very few IMG athletes, though I am told many did watch. In all, I probably saw 20 high schoolers, almost none of whom had the size to play for Michigan.

One who does, though, is 6'3, 295-pound offensive tackle Cameron Spence, a four-star with offers from the Wolverines, Ohio State, Penn State and a number of other elite schools. I ran into Spence, who is nursing a knee injury.

We chatted about Michigan, and he dodged the question like a seasoned NFL veteran.

"It shows how blessed I am to be at IMG, to be [at a place where Michigan] wants to use our facilities," Spence said. "They told us, 'We can't talk with you. We're not [trying to blow you off].'"

"It shows how innovative they can be," Spence said.

I ran into some non-IMG football folks, too.

"I think it's a big advantage," said Eric Sanders, offensive coordinator of the nearby Braden River High School team that had four players go Division I in 2016. "You get to practice and showcase your product on the field in an area with hundreds of high school students who have a dream of playing college football and might not know too much about Michigan football. And it's great for them to see the size it takes to play at this level and the speed and the intensity of the practice."

Michigan did not reach out to Sanders. He had just heard that it was open to the public through the media.

"It puts it right in front of their face," Sanders said of his players who were with him at the practice. "They didn't have any idea what they were coming out to. They thought it would just be a practice, and they look up and the stands are full and the traffic ... it took us over an hour to make what is normally a 15-minute drive here."

Few recruits saw it in person, and the biggest takeaway that I had was the elephant in the room: Michigan's attempt to publicly make this about anything but recruiting.

Both IMG and Michigan went out of their way to make sure everyone knew that the Wolverines weren't talking to recruits during the NCAA quiet period, even though they just happened to be practicing at the most talented high school in America.

After the announcement of Michigan's Florida trip received a lot of negative backlash, it seemed the Wolverines went out of their way to quiet doubters who believed this was more show than substance. You can bet the lack of over-the-top promotion during the event was calculated.

IMG is serious about complying w/ NCAA during Michigan's trip.

Harbaugh even took it so far as to not even say the words "IMG" during his 20-minute media session following the practice, perhaps for fear of incurring a minor NCAA violation.

While Harbaugh would not say IMG, and could not have any contacts with the recruits, he did confirm the feedback from coaches throughout Florida has been positive. Still, there is no doubt that the event will help Michigan with recruiting in the state. It's exposure and branding.

And while that might be true, I'm certain some Florida high school coaches will not take their superstar players to a practice at IMG for fear they might see the college-like facilities and elect to transfer. IMG does not recruit from Florida like it does other states, but it's not exactly turning down transfers, either.

But will Harbaugh be able to do this again? There is a lot of chatter that the NCAA will ban it.

"I don't see why not. You know my feelings on it. The arguments don't hold water," Harbaugh said after. "This is a great thing for everyone involved. Most importantly, the fellas."

If the NCAA doesn't ban the practice, the door could be opened for a school to do a huge road tour, like barnstorming baseball teams of yesteryear.

What is to stop a school, say Ohio State, from practicing at Miami Central on Monday, Ft. Lauderdale St. Thomas Aquinas on Tuesday, Lakeland on Wednesday and Jacksonville Trinity Christian on Thursday?

For his part, Harbaugh said that he will consider bringing the Wolverines to other locations next spring, and perhaps even this fall.