Saturday, NC State dealt the Seminoles a big upset and decimated their national title hopes. Let's go back through the game-thread comments from our Florida State blog and re-live their pain.

Thanks in part to an anemic second-half offense that launched punt after punt, such hopes were effectively dashed. NC State quarterback Mike Glennon, who couldn't piece together much of anything in the first half, took advantage of great field position, and his three consecutive fourth-down conversions dealt the 'Noles a shocking upset in just about the most agonizing way possible. (Here is video evidence, if you have the stomach for it.)

This game provides a perfect opportunity for us to introduce the Seismograph: a new feature in which we attempt to plot the waves of glee, anger, frustration, shock and horror from sports fans as a game progresses. I visited the game threads at our Florida State blog, Tomahawk Nation. By the end of the game, thousands of comments had been posted, and they offer us an enormous body of information from which to understand how unbelievably shitty this was for Seminoles fans.

Is this mean? I certainly don't intend for it to be. As a fan of undefeated Louisville, I can't help but look at all these comments and see the future. In a week, or a month, or something, I will be them. It's rather haunting. 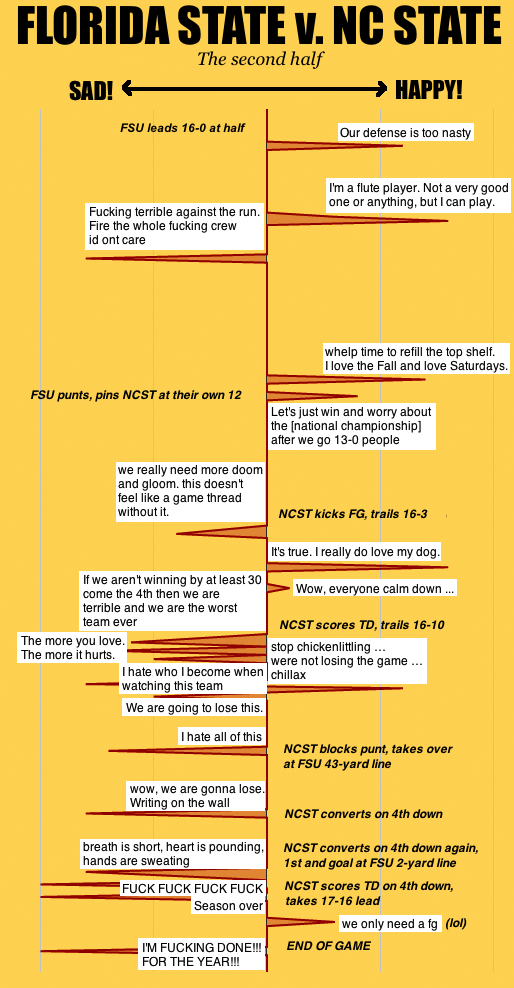 I'M FUCKING DONE!!!! FOR THE YEAR!!! I'M OVER IT NOT LOGGING ON TO THIS SITE NOT WATCHING ESPN NOT WATCHING NO MORE GAMES THIS YEAR FUCK EVERYTHING I’M OUT

I Dont when people finna realize that Fsu Will Never Win Anything As Long As Jimbo Fisher Is Are Head Coach…His Playing Calling Is Horrible…A Defense Coordinator Doesn’t Have To Scheme To Much For Fsu..Because The Playing Calling Is So Simple And Plan…No Trick Plays No Nothing…This Is A Sad Offense To Watch…All This Talent On Offense And You Can’t Score More Points…Put Any Avg Offense Coordinator We Would Be A Top Offense …Jimbo Put So Pressure On Mark Stoops Defense..To Win Games When He Has Just AS Much Talent On Offense….This Is Not A TOP 10 Team..Because NCST Shouldnt Be Able Top Play With A Top Team In America

Virginia anybody? This is my last post as a die hard Nole fan. Im officially retreating to being a CFB fan. This disfunctional relationship Ive been in for the last 25 years is over. Im done defending this team to everybody and getting ridiculed after we what it is we’ve done so well for the last DECADE! Jesus fucking Christ I hate this team.

My wife is PISSED

She is taking a trip to the emergency room with me tomorrow for my broken hand…and i have at least 3 holes to patch in the wall.

Wow. how long did it take you to type that with a busted hand? Or did you have your wife type it? 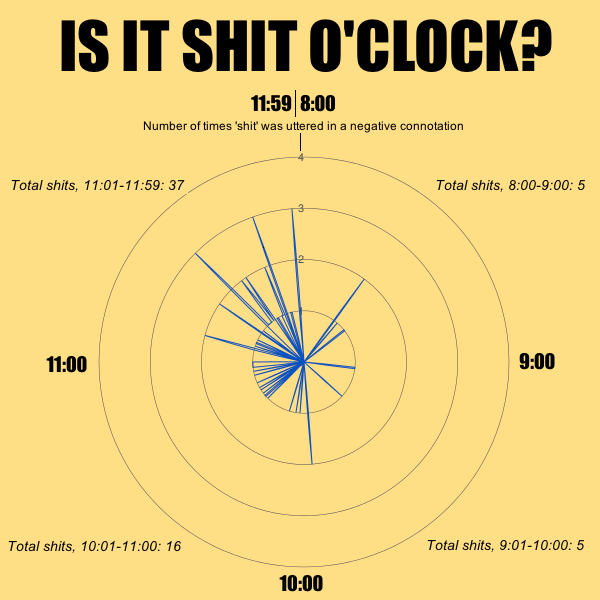 Step on their damn throats now

Needed to step on their throat there

let them come back in this game. we must shove it down their throat.

Jimbo Needs To Stop Being So Passive Against Inferior Competition

And step on their throats.

Still got the 4th quarter, people.

That's when we step on their throats. 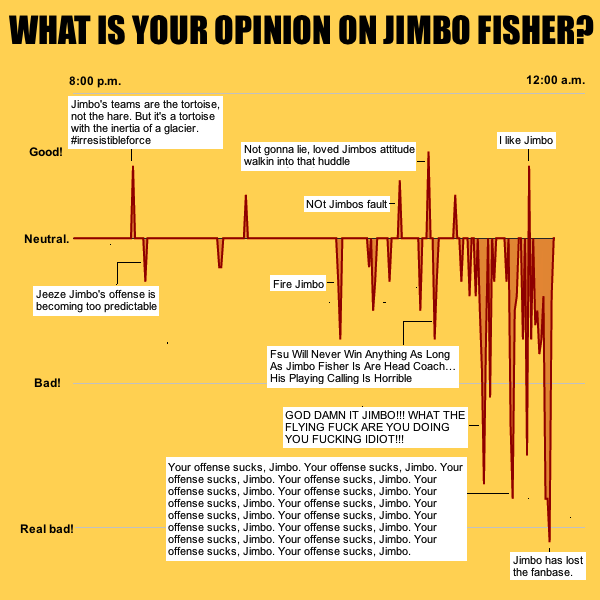 (For this graph, I rated unmistakably positive/negative comments from negative-10 to 10, with negative-10 being, well, negative. I stacked these ratings; in other words, Tomahawk Nation scored a negative-23 at 11:23 p.m. because multiple commenters posted terribly mad/sad things.)

This, being the first-ever edition of the Seismograph, is a bit of a beta test. Thank y'all for joining us. And once again, Tomahawk Nation: sincerest condolences.