The Alphabetical, Week 8: I'm sorry I was so strong and cool

The Alphabetical is too strong for its own good. Follow @SBNationCFB

Share All sharing options for: The Alphabetical, Week 8: I'm sorry I was so strong and cool

Apologies. Alabama defensive end LaMichael Fanning had to write an apology after suplexing Mizzou running back Russell Hansbrough during the Tide's 42-10, ho-hum, another-day-another-blowout destruction of the Tigers in Columbia. This is not a copy of that letter, but it probably is. 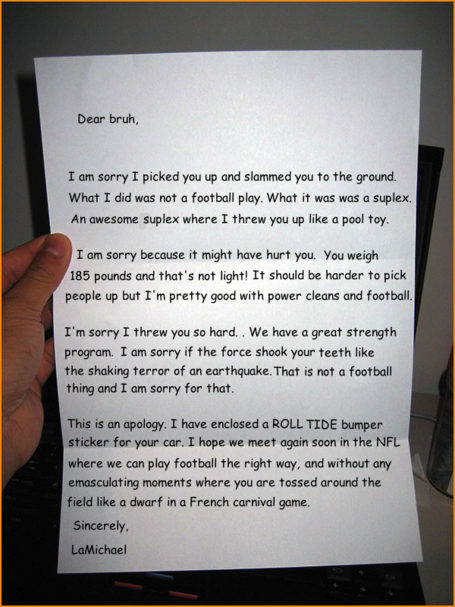 Buddy. As in Holly, born in Lubbock, Texas, the site of this weekend's most surprising non-surprise, a team losing on the road to Tommy Tuberville while carrying an abnormally high ranking and showing no understanding of what they were walking into. Being down 35-7 at the half might have shocked anyone who had not watched Tommy Tuberville go 5-2 against top five opponents at Auburn, and especially to those who do not understand what powers Lubbock has over unsuspecting opponents.

Courage. You were not forgotten, Sad Red Raider Fan of 2011. 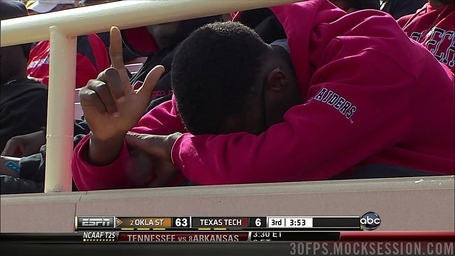 Not snow nor sleet nor a 60-point loss to Oklahoma State last year could stop you from delivering your passion to the field. You were owed greatness for your loyalty, and for one Saturday--if only for that one Saturday--you were repaid in glorious fashion. Warning: the butt-end of that repaid glory will be watching Tommy Tuberville take the first SEC job he's offered. Life is unfair.

Dykes. The logical counter to Tuberville's theoretical departure lost his bid to upset an SEC team on the road in Shreveport this past weekend, but after a few hours of mourning Sonny Dykes is probably alright with that for a few reasons. The first: against a good Aggie defense his attack posted mindbending numbers: 37 first downs, 615 yards of offense, and 57 points. The second: the Bulldogs should lay waste to the remainder of their schedule, finish 11-1 on the year, and then get a luxurious trip to Boise, Idaho.

Every Game Counts. The 11-1 Louisiana Tech Bulldogs get Boise as their reward, probably lose their coach to Texas Tech or someone else, and then have to shuffle over to Conference USA all in the span of just a few short months. We repeat: life is deeply unfair, and Malcolm in the Middle is really just a wacky prequel to Breaking Bad. That's the spoiler of the Breaking Bad series finale, and Lois returns to kill Walt/Hal out of nowhere just as he's poised to take over the international meth trade forever.

Fear. Told you Lubbock was terrifying.

No place whose primary colors are "dirt" is a place you want to be after dark, especially with Raider Red lurking in the windswept West Texas night.

Giffen Good. An economic term for an item people consume more of as the price rises. An example of that? Um ... [nudges your eyes down] 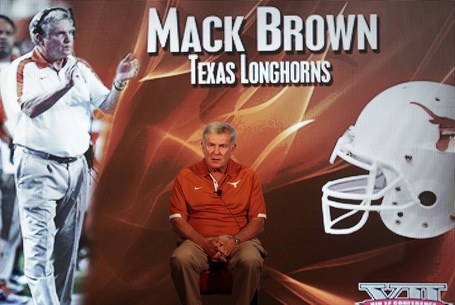 A 63-21 loss to Oklahoma underscores a real curiosity of the Texas program: as the program gets further and further away from the high water mark of 2005 and the BCS Title, the more expensive Texas football gets for its fans and its boosters. Texas is undoubtedly the richest program in the nation, just a golden hot tub of football luxuries filled with cash, first-rank recruits, and top-flight facilities. Austin is its own sales pitch, and that is before you turn on the Godzillatron and watch a prospect's eyes bug out of their head at the sheer luminosity of it all.

Yet as the Longhorns' revenues--and its prices--accelerated upward, the actual product declined in field value. The Longhorns won a conference title in 2009. Since that title, the Longhorns are 17-14, have lost the last three to rivals Oklahoma by a score of 146--58, and have lost to every Big 12 team save Kansas and Texas Tech in that span. They are, by record and performance, an overpaid Mississippi State with horn implants.

Handshakes and babies. And yet the demand keeps rolling in, and more importantly so do the checks. Mack Brown, as Longhorn bloggers are all too happy to point out, is a really decent man who has probably overspent whatever utility he had as a football coach. It is a longstanding joke that Mack Brown is the coach who holds the white balance card on interviews, swoops in as the ring-flashing closer for recruiting, and serves as the CEO of Texas, Inc, a company whose holdings now happen to include the Texas football team along with a television network and brand licensure division.

Impervious. The checks will clear. The revenues will continue to flow, so in a sense Mack Brown the CEO is impervious, and rightfully so. But the concept of a football program as a business only covers so much of its identity, the very root of which is still--despite the money, revenue, and number of eyeballs watching the program---winning and losing on Saturdays. Texas has been doing more of the latter, and it is beyond time to let Mack Brown do what he does best: manage, smile, and fundraise.

JD/MBA. The great irony is that Mack Brown discovered his true calling as a CEO this late in life, and had to become a football coach for four decades to do it. Next time just skip the lengthy, impoverishing tenure as an assistant and unpaid GA, and simply get the JD/MBA straight out of undergrad, reincarnated Mack Brown.

Kingsbury. It is a delight to watch Kliff Kingsbury complete the transformation from Mike Leach's most conservative quarterback to the slouchwear icon strutting the Texas A&M sidelines. How much he has to do with Johnny Manziel's endless improv act at quarterback is an impossible theoretical question to answer, but in the Bro Rankings of college football assistants he's top five at least.

Listicle Out Of Nowhere. Of those most BRO of assistant coaches:

Midpoint. This is so very depressing, but you are halfway through the college football season if you don't count the weird afterlife of the bowl season.

Nebulize. To reduce to a fine spray, which might be the end goal of Dan Mullen against any opponent. Already up and working the clock against Tennessee, Mullen opted to pass for a TD on 4th and 9 with fourteen seconds on the clock to put a fiery capper on a 41-31 victory over the Vols. The Dan Mullen Revenge Tour is a gory, hateful thing, and if you're not playing them it is a delight to watch, particularly if you like excellent cornerbacks. One is named Darius Slay, and sometimes one name tells you everything one needs to know about a team's general attitude.

On loan. Zach Boren, semi-professional fullback, is starting at linebacker for Ohio State. In related news, Ohio State's rehearsal year thing might be a really good thing for the Buckeyes because they could use a year to regrow their defense. (The one that fell off sometime last month. If you see it laying by the side of the road in Columbus, please return it to Urban Meyer's offices immediately.)

Perks. The one bonus of Ohio State having no semblance of defense? The Ohio State-Michigan game should just be old-school WACball played beneath leaden Midwestern skies with an over/under somewhere in the 90s. Rate this game in scientific units of "number of times the flaming ghosts of Bo Schembechler and Woody Hayes interrupt it to express their fiery wrath over poor tackling and fundamentals."

Quinton Patton. The LA Tech receiver had 21 catches for 233 yards on Saturday. In comparison, Florida's leading receiver, tight end Jordan Reed, has had 21 catches on the season.

Reclaimed. Tulane football, no longer winless after a victory over SMU. Eastern Michigan and UMass still have clean sheets in the win column, and thus keep the dream of that first round pick for Jeff George* alive.

*Jeff George is the only one who has this dream, which is impossible. Do not take it from him.

Silicon. The computers hate Chip Kelly and Oregon, and with reason: when the great human/robot wars arrive, it will be a visor and hurry-up offense that leads the way to freedom in the post-apocalypse. The robots have already sent servants back in time to thwart him, an explanation that is the only thing explaining how Cam Newton and Gene Chizik at Auburn ever happened. (Additional support: a laptop was an accomplice at Florida in getting Cam Newton to Auburn in the first place.)

Twinned. If you liked seeing South Carolina quarterback Connor Shaw running for his life, please watch South Carolina at Florida this Saturday, which will be basically the same game as LSU-South Carolina, but without men in tiger suits dancing in the stands.

Having typed this, watch both teams empty the playbook, throw 40 times each, and leave with Florida defeated and the SEC East in utter chaos. (Which is totally what is going to happen.)

Ugliness of The Week: BYU goes to South Bend, and if you've watched either team play you know someone is losing some teeth and using words clerics on either sideline will not approve of, but will understand. Manti Te'o will get the spotlight, but he's not the one with 12.5 tackles for loss and 7.5 sacks. That's BYU's Kyle Van Noy, and if he and Te'o are properly enraged this should be a bloody 6-3 gutter masterpiece of a game in the making.

Virginians, West. We don't care if you have music and K-State Mask on your side: the worst possible time to go to West Virginia for a game would be the week after the Mountaineers were humiliated on the road. Not that Collin Klein won't just roll through the WVU flee-fense like Frank the Combine in Cars, but he'll have to keep up with a Mountaineer offense that should rebound from whatever was wrong with them at Tech. 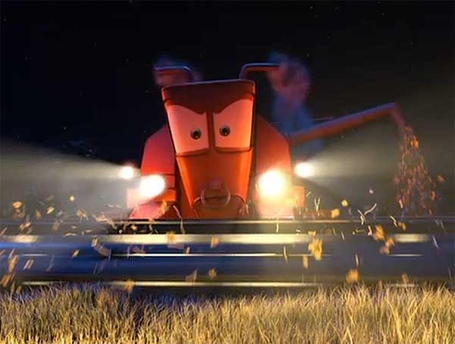 Collin Klein, seen here on a QB draw against Oklahoma.

The British band whose ceiling fell in when lead singer Andy Partridge, crippled by stagefright, swore off performing live and turned the band into a studio project. There's no football reference here unless you'd like to stretch and remind everyone about the danger of making plans for anyone, much less an unpredictable, volatile group of post-adolescents chasing an oblate spheroid around a field.

Yeesh. Florida State-Miami is this weekend, if you're into things that were relevant in 1991. It's the contractually obligated REM album of football matchups! (P.S. Miami is going to diiiiiiiiiiiie, but if no one is there to see it did it really happen at all?)

Zardoz. Lest you be too hard on a team that drops a game midseason: we all make mistakes in life. Yes, even Sean Connery.