This week in schadenfreude: Texas puts Mack Brown in the basement

Share All sharing options for: This week in schadenfreude: Texas puts Mack Brown in the basement

Say this much for Texas: they have some smoking hot women who genuinely care about football. Unfortunately for Longhorns fans, the rest of the nation generally finds this out when one of them is reacting in disbelief to Texas getting annihilated at DKR. A couple years ago it was Oh My God Girl watching UCLA club Texas, 34-12; this weekend introduced us all to Don't Read Her Lips Girl:

Seems that Manny drew up another screen door defense

My sons mini football team runs that same bell sweep with 2 blockers. It's impossible to stop lol. For 8 yr olds

I want that son of a bitch diaz jobless, homeless, and penniless by the end of the day.

… and then the first quarter ends.

Aftermath is as you would expect:

This is the thread where we destroy our tickets:

Many "bad fans" like me have vowed to not attend games. Here, we show that we really mean it. This thread is not to get anyone's attention, but just for...I really don't know.

…In accounting, this is called a "sunk cost" and is completely worthless to discuss. You paid for the tickets whether anyone sits in them or not. You weren't going to sell them if our team was worth a $#@!, so you'd be out that $ anyway. My position is, "I was going to be able to pay my bills attending awesome football games, so I will manage the same NOT going to the '$#@!-show'". 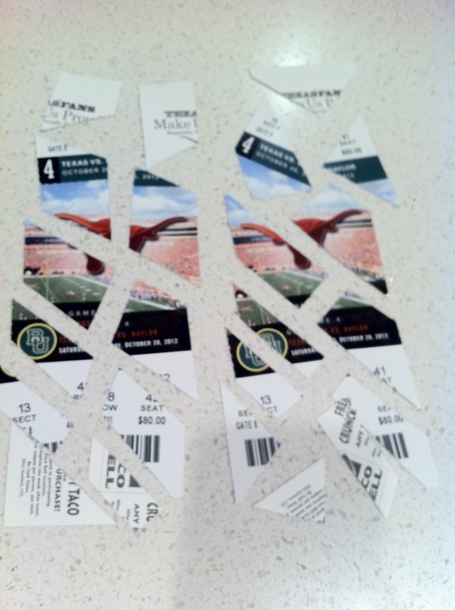 And this guy… what are you doing, guy? Never bring a lady to a game in which you may get torn to tiny shreds by your most hated rival. Emphasis added:

I $#@!ing lost it. Check this scenario out. I brought my girlfriend of 7 months to the game (bad $#@!ing idea). This was her first game we have been to together. (She was working for the first 2 games, and we missed WVU for family obligations)

So this is our first game together. I am wasted, in the stands, and we are getting our $#@! pushed in. I $#@!ing hate everything. And she doesn’t know or understand what this game means to me, or how I will react when losing to ou. $#@! gets bad. She thinks I have anger issues because I start wishing death to bob stoops and every other ou fan. I am screaming and yelling at our team to do something, and I am pretty sure I issued a jihad against Phillips and Thompson for sucking so much $#@! on the field.

So after the game she takes me aside and "we have a talk," she asks me why I hate ou so much, and tells me that those fans have done nothing to you. She says, "you literally said, you wished all those trailer park mother $#@!ers would die on the way back to oklahoma" and that NOOOOBODY else thinks like that...(I should have told her to go to Shaggy) so I just shut down and was too depressed to start an argument. I understand now that she just doesn’t get it. She went to UT but doesn’t live and die TX football. She is pretty awesome because she is still with me after that entire fiasco. I told her I am only like this with ou, so I have to be on my best behavior the rest of the year. So if/when we lose to Baylor or Iowa state at home, I don’t know what I will do.

I didn’t go over the top did I? I need some positive reinforcement from people who understand...

Next week, this guy and his special lady friend take a special trip to Lars Von Trier's new movie Several Adorable Animals Put In A Wood Chipper. He is Scott Tenorman of the Week, and will be next week too when he is forever alone yet again.

Hey guys, I was at a wedding yesterday and had to record the game. Did I miss anything?

Sgt Hulk: We were tied at kick off

neonmoon44: Please watch it and post your reactions in real time.

Orange Marrow: A word of advice:
1) unplug your DVR
2) toss it into a dumpster
3) ignite dumpster
You'll get the same effect as watching Texas play while being able to roast hot dogs and marshmallows. Just roll with it. Trust me.

I will fistfight any of you mother%$&ers riggt now

Randy: mother$#@!r you better leave bfore i light your railer on fire

Randy: i will pay you to come $#@! with me, cameron road in front of fran's bitch

Gatorubet: I will accept your pugilistic invitation, but only if you can assure me you will be wearing a baseball cap turned sideways.

BONUS: Random Michigan fan on Shaggy Bevo posts inspiring story of program recovery, says things will be okay, responds to all responses to his OP with "it's not your fault" + picture of Robin Williams hugging Matt Damon from Good Will Hunting, is not received particularly well.

Spaz is pathetic and Bates shouldn't wait to fire him

What did Spaz say to his players and coaches at half? "That's enough." "Nice 30 minutes, now let's hurry up and get out of here."

Virginia check-in after a fifth straight loss, this to Maryland:

How much longer can I still blame Groh?

I am thinking of blaming him until 2018

And Virginia being self-aware:

Do you all think that UVA is failing on the "overall" game day
experience? I mean, as far as engaging the crowd and getting them
into the game? (I know that the team performance plays into this and
can somewhat counter their efforts) VT plays Enter Sandman and
Hokies start dry humping each other. We're in a key part of the game
and the band breaks into Backstreet Boys. I was fully prepared to hear
Ambrosia and Karen Carpenter by the 4th quarter.

THIS IS FREAKING FOOTBALL! I DON'T NEED TO HEAR NSYNC,
OR HEAR TERESA SULLIVAN TELLING ME WHAT A BIG WAHOO
SHE IS (and she is a BIG wahoo)! I WANT LAROY TO RIP THE HEAD
OFF OF SOMEONE AND RUN OVER AND SHOVE IT UP EDSELL'S
@$% AND THEN HAVE THE STADIUM BREAK INTO SOME FREAKIN
BAD$%$ HIP HOP SONG I'VE NEVER HEARD OF BUT THAT I'LL TRY
TO DANCE TO WITH FIREWORKS POPPING OFF EVERYWHERE!!
COME ON!!!!

I want to see this as well.

I'm really excited for George DeLeone to learn nothing from this passing, run 40 times in the second half and have UConn lose 17-14.

UConn was up, 14-0, at that point. I'm going to step away from the conference now.

Oh, hey, West Virginia. Why are you here? Right, that. You've just gotten hammered by Texas Tech, so it's time to hit up the Scout message board and find thread titles in all caps and/or sporting exclamation points:

How to: Proper Meltdown Thread Format

Please include the following: By following this protocol, you can make a difference in your Mountaineer Football Experience.

They've got it down.

Michigan State entered the year hoping this would finally be the year they make a Rose Bowl. Three games in they're 1-2, with that win a narrow one over Indiana. Pleasure: they do not have it.

OC on the right. Probably.

They're not big fans of their offensive coordinator:

A syphilitic howler monkey could do just as good a job as roushar.

blah blah blah. He might as well have slapped himself across the face for all anybody cares about what he has to say right now.

This man may have been drunk:

PleASE HAVE YOUR bUD lIGHT MILLER 64, bECAUCE WE ALL KNOW THE AMERICAN BEER IIKEMAKING LOVE TO A WOMEN IN A CANOE....F---ING CLOSE TO WATER!!!

+1 Here's a spider for your troubles

Michigan State fans cope as only they can:

How are you coping with football failure?

tManWithNoName: All I've got is Ambien. I guess I could sleep through this.

JMCSpartan08: I've just been drinking and wandering aimlessly through the streets, praying for an out of control driver and sweet relief.

Spartan86: Goat f---ing. Seriously. We have a small hobby goat herd, but no buck. After yesterday's game we took a couple of does to get freshened. So, basically, yes, goat f---ing.

Purdue had a great start against Wisconsin! They scored a touchdown! Then things happened!

The band Avenged Sevenfold has a song called, "An Epic of Time Wasted." That is now the official theme song of the Danny Hope era in West Lafayette, which needs to come to an end this year.

The era of Walrus coaches may be nearing an end.

It’s time for a change. Hope and his stupid mustache have lost again. ..

After four years and all the platitudes and broken promises you can think of, Purdue is no closer to ever getting there. In fact, they’re going backwards. Fluke losses to Rice aren’t flukes. Over-hyped conference play is a disappointment. Hope talks shit, gets blown out. …

If there was one B1G coach in the hot seat this year, it was Danny Hope. Has he done anything to cool it down? No.

He just talks shit with his stupid mustache.

Don't blame the mustache, man. Come on. Listen to this guy:

The only thing wrong with your analysis

it’s unfair to hold the actual mustache responsible – I’m not talking about the man referred to as ‘The Moustache’, but the actual fur on his upper lip.

That said, I WOULD be in favor of letting his facial hair make game day decisions one week – just to try something different.

If you're dumping walruses, allow the fanbase to suggest another marine animal: 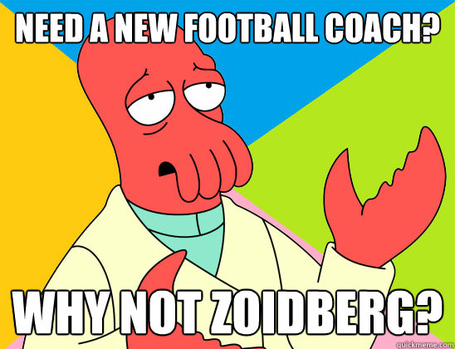 It's time to check in with Colorado again after a 51-17 loss to Arizona State:

Dallas Buff: Pathetic. How many alums do we have? Nobody gives a **** about how bad we are. I hate all of you.

Burrito Palazzo: I drowned that guy in a pool!

Nobody home, except one guy:

SuperBuff: its bad im abive the band right niw and no one with twenty yards, but i did expise myself sooo....

And it's time to throw in the towel:

i'm officially out of hope

there is absolutely no reason to believe that CU football will ever be relevant again, let alone "good." …

as long as that is true, there is no point in donating, supporting, or following this. why should i care if they don't care? why should i hope for miracles when they won't even put some basic foundational stuff in place to give us a chance to be competitive?

On pac-12 coaches call right now. Colorado's Jon Embree was 1st, and no one asked him a question. I heard him high-5 himself as he hung up.

Leave now, Colorado fans, before it's too late. It is already too late.

Auburn: like Kentucky without a basketball program. A week after losing to Arkansas they go down by three touchdowns to Ole Miss for the Rebs' first win in 16(!) conference games. Open letters are short and to the point:

That is a moderator on that board.

Biz Eagle: I thought when we got rid of Lowder, then everything would be utopia. After Dye is gone, who will the next evil puppet master be?

At least they're not wearing pink accessories:

Shut up and take it

Not much to say anymore. There comes a point when you just need to accept it for what it is. Just be happy that we have great looking uniforms.

No one can take that away from you. You did not dress up as the Bushwackers on Saturday, unlike South Carolina.

NEXT WEEK: Michigan State or Michigan is despondent! Manziel versus Hat! South Carolina-Florida! Auburn loses to Vandy by three scores! FSU-Miami! OH MY GOD WHAT IS GOING TO HAPPEN TO COLORADO AGAINST USC.