The Longhorn Network may soon need to replace the man playing the role of Football Coach. The perfect candidate is easy to name.

Share All sharing options for: Replacing Mack Brown: The hunt for America's next reality TV superstar

He has legitimate private concerns. He has to devote at least six of his weekly hours to the network, in addition to his many other non-coaching duties, and opponents get a look at non-strategic portions of his practices.

But make no mistake: this is a show of, at worst, weakness and fear, or at best frustration. These are natural responses to Brown's predicament (11-14 in his last 25 games against BCS opponents, only three of whom are even arguably on Texas' level), but no CEO should have a quarrel with the most unique of his megacorporation's wide suite of advantages, especially not publicly.

So let's say Mack Brown is gone. Where do we go from here?

Welding together Southeastern defense with Northwestern offense is one recommendation, and one Brown has tried, with incomplete results. Bryan Harsin, from Boise State, has returned the Horns offense to the country's upper fourth, while Manny Diaz's side has allowed 460 or more (sometimes WAY more) yards in five straight Big 12 games. So there's that, but there's shockingly little in there on what kind of television personality Texas needs to look for.

Lee Corso, Rick Neuheisel, Houston Nutt, Dan Hawkins, Bob Davie, Lou Holtz and Mike Bellotti are among those who combine television and coaching experience, and any could serve capably as the Longhorn Network's next big star.

But none of those coaches has ever led a Texas program, which is vital for major things like portraying a Southwesterner on the Longhorn Network (other than Davie's stint as Texas A&M's linebackers coach and defensive coordinator. Davie's from Pennsylvania! Disqualified!) and minor things like recruiting.

I say Texas turns to a man who's both really good at talking and has proved himself in the Lone Star state. A man who's already posted a 9-5-2 record in games involving the Longhorns: 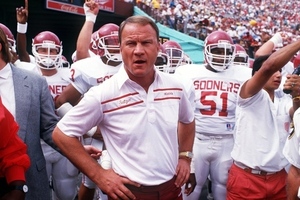