Week 6 in college football taught us to always follow Gus Malzahn wherever he goes, accept whatever Texas is willing to give you, and listen to wise Appalachian medical advice whenever it may arrive.

Atomic. This part is about Gus Malzahn, but first you need to hear about Tsutomu Yamaguchi, the only man on the planet to survive two atomic bomb attacks. Yamaguchi, a Nagasaki resident, was on a three-month business trip to Hiroshima when the first bomb hit on August 6th, 1945. Despite being burned over much of the left side of his body, Yamaguchi got treatment and showed up in bandages for work on August 9th. In his hometown of Nagasaki. Where the Americans dropped a bomb at 11:00 a.m., and Yamaguchi had to have had the most justified, "REALLY, LIFE? I MEAN REALLY?" moment ever.

Bailing. He lived. In comparison, what Gus Malzahn has survived is piddling, but comparable in terms of timing. Malzahn was hired in a cheap recruiting ploy at Arkansas, then thrown clear into the arms of Todd Graham at Tulsa. Malzahn's offenses thrived, but fate intervened again as Malzahn opted to move to Auburn, and thus both missed the Todd Graham Pitt disaster and met up with Cam Newton. After one non-Cam season at Auburn, Malzahn then took the oddball move of going to Arkansas State. This looked very strange until Auburn imploded this year and Arkansas got Petrino'd, and now Gus Malzahn is 3-3 at Arkansas State, comfortable and in line for interviews as a head coach in the offseason.

Corollary: If Gus Malzahn suddenly leaves a bus you are riding, you leave with him. That bus is about to explode.

Delocated. The very strange Adult Swim show about a family living in witness protection. It's really a show about people wearing ski masks all the time no matter where they are, but most of the plots center on identity, and how hard it is changing from one thing to the next. This is going to be about Auburn, yes? You're damn right it is, but there is a lot more to it than that.

Eagle War'd. The Auburn case proves a lot about staff continuity in the negative sense of the argument. Having switched out offensive and defensive coordinators over the offseason, you know see all the pitfalls of a team sorting out their identity on the fly: missed assignments, mismatched talent functioning in systems they've never played in before, and usually one unit (at least) that cannot even come close to functioning properly. In Auburn's case this is the offense, a unit riding in the bottom quintile of college football in every major category.

For the less statistically inclined. The Tigerplainsmen scored seven points against Arkansas, and they arrived by a trick play. That explains the inky sadness of the depths the Auburn offense lives at these days just as well as any other number does.

Gadolinium. The mineral that makes MRIs work through a series of complex chemical interactions you can read all about if you're really bored. If you don't want to read that, just know this: if ingesting gadolinium sounds like it would be bad for you, you have great instincts, but also miss the point of an MRI: diagnosis.

We've reached the point in the season where trial and error (mostly error) have let anyone and everyone see what is wrong with your football team. With the exception of Alabama, there's something grossly wrong with every team in the top ten.

Some of those are quibbles, but if you can do that in a few minutes on the top ten, everyone else below college football's obvious nobility can do this in seconds, and painfully so.

Hacking. Paul Johnson, M.D. and coach at Georgia Tech, read the diagnostics quickly enough in firing Al Groh six games into the season. Clearly a fan of amputation, Dr. Johnson performed the operation after the Georgia Tech defense gave up more than 40 points in three straight games. This stretch included a 49-28 loss to Middle Tennessee State, whose only other 40-point game came against Memphis. This alone justifies the amputation. Proceed with your practice, Coach Johnson.

Item. In support of that diagnosis, here is an additional piece of evidence to drive home just how bad being compared to Memphis football in any sense of the word truly is: 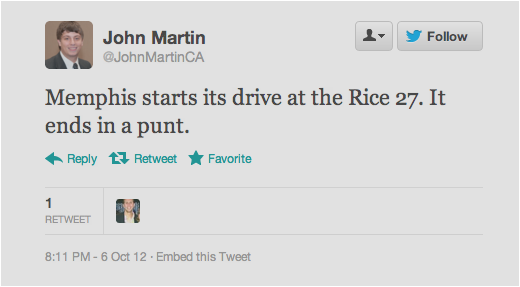 Sometimes your life is merely a warning to others, and sometimes by life we mean "your football team." Memphis beat Rice 14-10 this weekend, however, making Rice your warning to others for the week. Don't be Rice football, ever.

João. As in Gilberto, the father of bossa nova who would fit right in with most football coaches in one respect: he never changed much, and used a few simple fundamentals to build a song. (Including playing piano one-handed, something that looks and sounds awesome when he does it, and sounds like a hamster hopping over the keys when you do it.)

Going back to change and football coaches, consider Alabama. You know what they do differently from year to year? The answer is very little, and always in increments. The best team in college football is a team whose basic strategies are something Nick Saban admits have changed little since his time as a young assistant with the Cleveland Browns working under Bill Belichick.

The only thing that has changed: he wore really cool glasses back then. 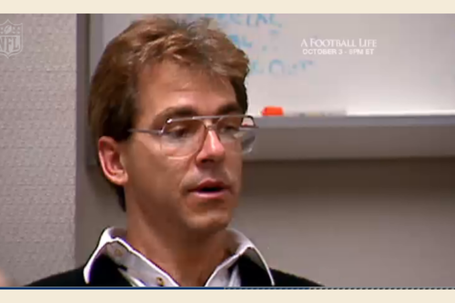 The formula is important, but the vaunted process is just like anything else that succeeds in football: it has to be done well, and it has to be done in a way that ensure replication under any conditions. It would be fun to mention this and compare Saban to a dronemaster, but he is far from alone in this emphasis on replicable results.

Karl Popper. German philosopher who would have been a fine coordinator at the college level.

Our knowledge can only be finite, while our ignorance must necessarily be infinite.

Assume nothing, and create something that works with an understanding that you may not know what's coming. This leads us to the West Virginia offense, a unit capable of admitting that ignorance and adjusting on the fly when necessary. When Texas showed two safeties high and the clock running, Dana Holgorsen did the unthinkable by doing what less audacious coaches would have done: he ran the ball.

See? Just look at that safety floating somewhere out around Lockhart, Texas. 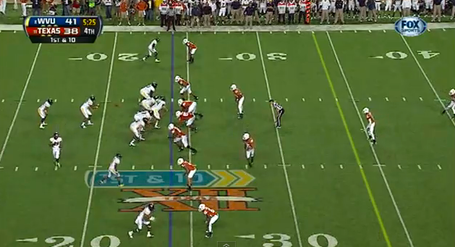 Texas stayed two-high for most of the drive, and West Virginia responded by taking free money every time. Just like the Alabama defense's pattern reading and coverages, much of what makes Holgorsen's attack assumes little, observes a lot, and works with the numbers given. They do what they do, and only what they do. If this seems overly simplistic, well, go watch Auburn try to run a power-I offense with spread personnel, and you'll see just how hard it is to do in real time.

Lipothymy. A swooning, as in the Texas defense against the Hair Raid. Texas did a superb job against WVU relative to other defenses, forcing Geno Smith into two fumbles and limiting (limiting!) the Mountaineers to 49 points. Yet even with that effort, Texas finished the game by a.) guessing blindly and wrongly about WVU's endgame, and b.) refusing to let them run out the clock. The flipside: WVU's defense is so forgiving they let Texas score and then had to weather an onside attempt to seal the game.

Malaprop. Charles Davis repeatedly called Holgorsen (Hol-gurr-sun) by the last name "Hol-jurr-sun." This was the second worst error he made as an analyst this past Saturday. The first: saying Dana Holgorsen was calling "the game of his life." A game of Dana Holgorsen's life would involve so much more than football: waterbeds, casinos, skydiving, and that's just the stuff we can mention in front of the kids. (Also: it would involve his football team scoring more than a measly 49 points.)

Oddness. The best defensive effort against WVU so far? Maryland, who held the Mountaineers to 31 points. Randy Edsall's got superpowers, and never the ones he needs at the right time.

Prospect Hill. One of many high points in Boston where once could observe Frank Spaziani being fired sometime in the near future at Boston College. BC lost to Army this weekend, which while patriotic is not what you ever want to do in order to keep your job coaching football. Remember when BC fired Jeff Jagodzinski for interviewing for other jobs after winning 20 games in two years, and then gave the job to a lifelong assistant who appeared in need of a nap all the time? That was delightful.

Quinton. As in Patton, the Louisiana Tech receiver who faces Texas A&M this weekend in the game most likely to force defensive coordinators into seizures. Sonny Dykes will surely be going elsewhere this season, so catch the battle of "Who wants to be ranked No. 23 in the country" while one can.

Retread. We really want the whole firing conversation between Paul Johnson and Al Groh to have gone like this.

Al: Hey, Paul, I got this job lined up at Boston College.

Al: I know. I just don't want you to be weird about it. I'll finish the year here, and then go up there.

Al: Aw, pal, so glad you're understanding about that.

Paul. Oh, not at all. I said it was an opportunity. That's a fact. You're fired. That's another fact.

Soft Spot. A list of Alabama's weaknesses at a team was supposed to go here. There are none, so here is a video of Bear Bryant doing comedy with Bob Hope.

His delivery's perfect, and in summary ROLL SKETCH COMEDY TIDE.

Torment. This has been covered elsewhere, but if you see Florida safety Matt Elam approaching, consider the irony of his position's name and the unavoidable harm you're about to experience at his hands.

Unacceptable. The slate this weekend features so little in terms of absolute value that we must flee to horror for entertainment, and...there it is, right on cue, the Paranormal Activity of college football viewing, Iowa-Michigan State. (The Big Ten Network is the camera in the corner watching the bedroom; the Iowa offense is the terrifying ghost watching you sleep.)

Vigilance. Everyone can use a little bit less of it in praising Notre Dame's actually-pretty-good football team if they beat Stanford this weekend, even if a Stanford-Notre Dame game in 2012 between two run-first defensive teams will be as ugly as a mannequin made of dead barnacles wearing fat pants and a sleeveless shirt. (This mannequin served as Stanford's quarterback under Walt Harris, and his life story will make the saddest 30 for 30 ever.)

Xanadu. A note to keep your chin up even if your football team has given up on life. Someone once sold Hollywood a movie about roller-skating wood nymphs, and if that can be done then anything remains possible for you, me, and all of us as humans, really.

Zamindar. A landowner, as in Steve Spurrier, who can rightly claim after three straight defeats of the Georgia Bulldogs that South Carolina no longer owns them. South Carolina has been good at football for five years, and this and Spurrier's expanding estate in Columbia may be his greatest achievement yet.