SB Nation college football friends Mark Ennis and Martin Rickman try to give us a clearer picture of the Top 10 after another wild week, which saw Alabama lose its hold on No. 1. Follow @SBNationCFB

Share All sharing options for: College football rankings debate: Alabama loses, so who's your Top 10 now?

Martin: Alabama's stranglehold on No. 1 is over. Now that the top spot is up for grabs, who gets slotted in there, and is it just as a placeholder, or will it be for good?

Mark: What's annoying about the debate over who should be No. 1 is that people still don't even agree on what the criteria is for ranking teams. There's the eye-test camp and the resumé camp. Personally, I think you have to kinda blend them into one and then let the resume be a tiebreaker if you think you can't make a good distinction.

I think Oregon should be No. 1, and I think there's a reasonably good chance they'll stay there. It won't just a be a placeholder.

Martin: I'm inclined to agree with you. The strictly eye-test group drives me mad. Everyone's eye is different. There's no measure of impartiality there. And when it comes to resumé, computer rankings are flawed. As with scouting players, you need to combine metrics and observation. And from all the football I have watched, including all but one of each of Oregon, Kansas State and Notre Dame's games, I've got to put Oregon at the top until they stumble.

If we're looking at 2 and 3, Notre Dame is flawed, and whether they keep winning or not, those flaws are like flicking a Bic lighter in a room filled with natural gas. You might get away with it for awhile, but sooner or later, it's going to go up in flames. K-State is my No. 2, and it's not as close as it probably should be.

Mark: This is going to sound ridiculous, but hear me out. I look at Notre Dame like a super-sized Louisville. They're winning their games, but the longer we go, the less impressed I am with the games they've won. There are so many different angles by which you can discount the Notre Dame resumé. And this becomes the problem for a team hoping to leap another undefeated team. When you're squeaking by everyone, your resume better justify all of the struggles. But with Notre Dame, they've squeaked by a lot of really average teams (even bad teams). Even the blowout win over Miami is sort of fool's gold because if Miami catches two passes, it's a completely different game.

We're not really debating at this point, but yeah, I like Kansas State at No. 2.

Martin: No, I think the Louisville comparison is completely apt. The problem is you get fans or analysts who say, "It's about wins and losses, stats are for losers," but if you have two teams at 10-0, you have to compare them somehow. To do so requires equal parts who-did-you-beat and how-did-you-beat-them.

Notre Dame's Oklahoma win is the best thing they've got, but Kansas State has that win too. And Kansas State has a blowout win over Miami, as well. These two teams are easy to compare, in my opinion. And K-State looks strong. Notre Dame has to hold serve (should be easy against Wake Forest) and impress against USC, then hope Oregon and/or the Wildcats lose. That's their only shot at the title.

After the top three, there's a log jam, and as is often the case, it's a whole mess of SEC teams -- and Florida State basically. How do you measure this bunch when it's just a giant game of Rock, Paper, Scissors? And what do we do with the Noles?

Mark: Well let's work backwards on this. Broadly speaking, I think Florida State should be the lowest ranked of the one-loss teams, and I would entertain arguments that they should be behind a two-loss team or two as well, and here's why:

Martin: Well that Florida game is going to make or break the Gators and the Noles, either way, isn't it? So you're keeping FSU at 10? Who jumps them since Louisville is dropping out of the top 10? Stanford? A&M? Certainly not Oklahoma.

Mark: Yeah, I'm inclined to leave Florida State at No. 10 and move someone else up. FSU was exceedingly lucky to get by the worst Virginia Tech team in decades. Having established that, I think FSU belongs at the back end. How about we work down now? Who should be No. 4?

And that brings us to what we do with Ohio State. Do you want to rank them? If so, do you have them ahead of all of those one-loss SEC teams?

Martin: I don't rank Ohio State. They're a ghost team this year. It's a pointless endeavor to rank a team that is essentially not playing a season that will count. If we were ranking them, sure, but I don't think they're any better than any one-loss SEC team. Ohio State's best win is Nebraska? That's not a better win than Clemson. And they barely beat bad-to-average Cal, Indiana, Purdue and Michigan State teams and looked less-than-great against UCF and Penn State.

You want to mention a fool's gold team, a shaky Ohio State team with a bad run defense, a quarterback one leg injury away from disaster and an existential crisis of being is it.

So let's just ignore Ohio State for now. We'll be talking about them plenty next season. It's SEC roshambo time.

Mark: Ok, I actually agree on both counts about Ohio State, so now it's time to cut the SEC Gordian knot and rank all of these one- and two-loss teams that have beaten each other. Right now, I would rank Georgia No. 4. Do I think Georgia is abstractly the fourth best team in the country? Hell no. They just slid by a terrible Kentucky team two weeks ago and they got killed by South Carolina. However, they beat Florida on a neutral field and have been humming the past two weeks blowing out Ole Miss and Auburn tonight.

Martin: That works. Florida is another trainwreck waiting to happen, regardless of the good defense. They're like a 15-year-old who just drank 151 for the first time and popped in NCAA Football 13 and made the most abstract art installation of an offense he could find. When it works, he points to his buddy and says, "Suck on these," but sometimes he runs backwards 50 yards and takes a knee at the 1.

I've got Bama at 5 despite the loss this week, Florida at 6, LSU at 7 and then my head hurts because God help me I can't put South Carolina, then A&M, all in a row -- that makes no sense, and the SEC chip in my brain is beeping. 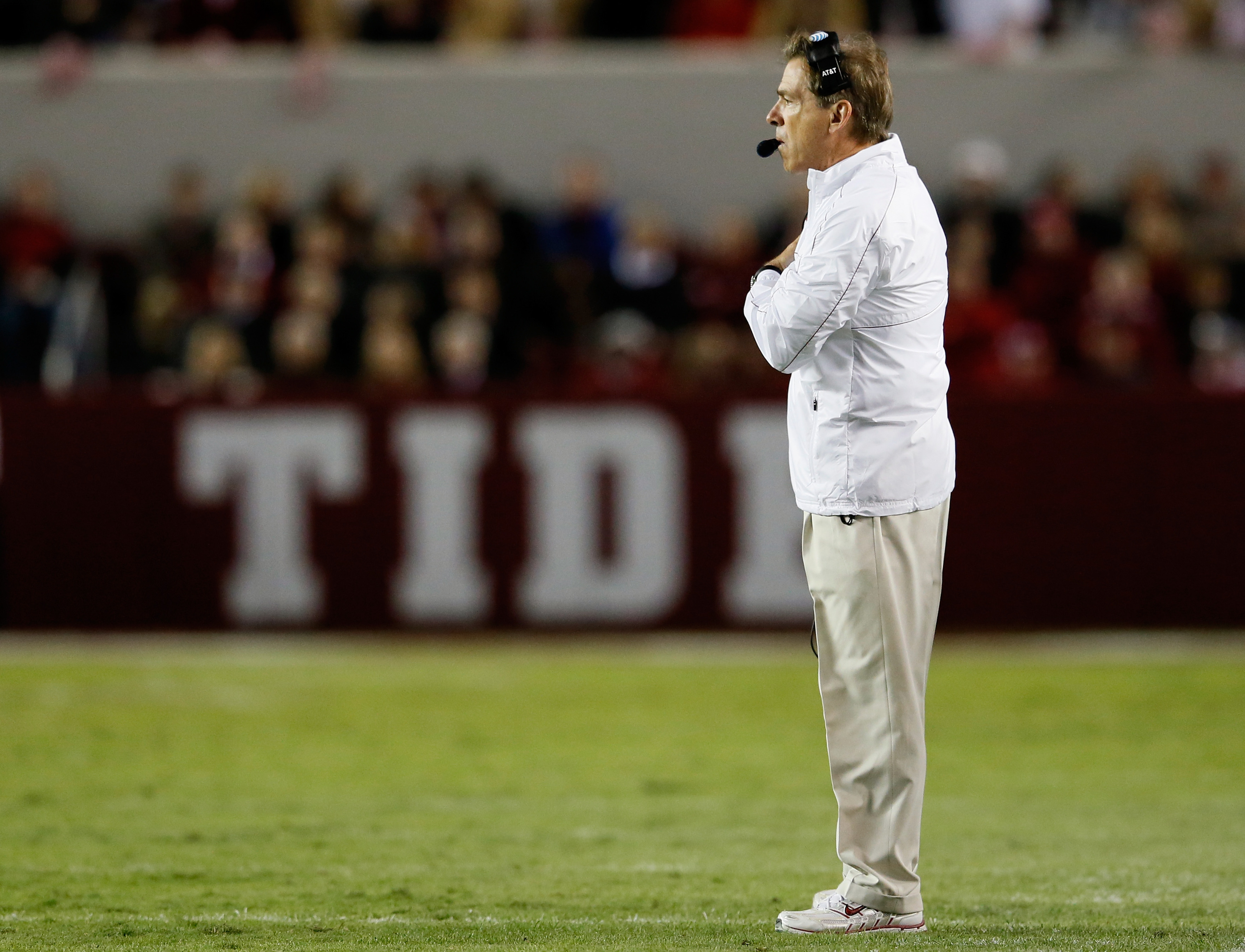 Mark: I'm not sure Alabama deserves to be No. 5. I know that sounds absurd, but this is where we start trying to play resume vs. eye test and balance some mixture of the two. If you look at Alabama, they did manage to beat LSU last weekend, but beyond that, their schedule has sucked out loud. They lost at home today to Texas A&M, they beat an incredibly overrated Michigan team, and then it's puke city: FAU, WKU, wildly overrated Mississippi State, Ole Miss and on and on.

I know it's heresy to even ask, but what has Alabama done to be No. 5? Florida at least has wins against A&M on the road and South Carolina. Even when it looks like a dumpster fire and literally steals a game against an overmatched team like it did today, its resume, to me, far outshines Alabama's to this point.

Martin: Okay, so flip Bama and Florida? Is that a compromise? Otherwise, you do know Nick Saban already made a voodoo doll of you. He just ran out of pins and had to run to the corner store.

Mark: See, now that Johnny Football did his thing today, I'm not even afraid of Alabama anymore. And maybe that's the best result of what happened today. Alabama is human. Teams that play them can, on occasion, win. So bring it on, Harvey Updyke; my yard looks like hell anyway.

I think Oklahoma and South Carolina get shut out, so I'm inclined to go FSU, A&M, Stanford if I'm presented with that list.

Mark: This might sound wacky to you, so feel free to set me straight, but, why not Texas A&M ahead of Florida State? A&M has two losses, but they're both to teams in the top seven, they've blown out almost everyone else, and have wins over the only remaining BCS buster (LA Tech) and won at Alabama, which has to count for something.

Martin: I'll give you that. One loss is to a one-loss Florida team, in the team's first-ever SEC game. And the second loss was to LSU. By a combined eight points. Let's give A&M some love. They've clearly gotten better as the year has gone on. I can't say the same for FSU. We're okay with 8-9-10 being A&M, FSU, Stanford?

Whoa. Did we just figure it out?

Mark: I...I think we did. Since you're familiar with them, let me throw one last question to you. Where do you think Clemson belongs? They haven't beaten anyone, but they're blowing out the teams that they have faced just about every week and I'm not convinced they wouldn't beat FSU if they had a second shot at them. Do you think they're a budding top 10 team or are they like Louisville sorta was, getting by on winning against bums?

Martin: It all depends on this South Carolina game. It really does. They finish strong, beat the Gamecocks, they have a Sugar Bowl bid locked up. They're fun to watch, their coach is insane, and they are playing better every week. I put a lot of stock in how teams finish, but that's probably due to my specialization in college basketball for so long.

Rather than that 'last 10' metric, how a team plays from mid-november until the conference championship games is critical. And with the 11-15 spots such a mess in the first place, it's good to have a team taking care of business. But if we start getting into where to rank them, we'll be here until Thursday.

Mark: I agree with you, if they play well against South Carolina and finish 11-1 with the only loss coming against FSU, then I'd have no problem with them in the Sugar Bowl.

Good discussion, Martin. We should do this again.