Stanford vs. Oregon preview: Cardinal built to beat the Ducks this time around?

Oregon's defense has fallen into an injury-plagued funk, and the Stanford defense is built to better withstand Oregon's relentless offense. Might the Cardinal have a chance of pulling an upset after two years of Oregon dominance in the series? Follow @SBNationCFB

Share All sharing options for: Stanford vs. Oregon preview: Cardinal built to beat the Ducks this time around?

Over the 2010-11 seasons, with Andrew Luck behind center, Stanford was defined by two things: unprecedented success and losses to Oregon. The Cardinal lost two games to the Ducks, allowing 1,013 yards and 105 points in the process and letting Oregon finish on runs of 49-17 and 45-24; against everybody else, they went 23-1, allowing an average of 316 yards and 17 points per game. The Cardinal posted two BCS bowl bids in those two years after having made just one currently BCS bowl since 1972, but losses to Oregon prevented them from becoming serious players in the national title hunt.

In 2012, meanwhile, only Oregon is in that hunt, but a Stanford upset on Saturday could earn the Cardinal both a measure of revenge and, potentially, a spot in the Pac-12 title game, Luck or no Luck.

Oregon is currently a 20.5 point favorite over Stanford, however, and with good reason. Despite a rash of injuries, the Ducks are cruising. Oregon survived a tough trip to USC with a 62-51 win and has won its six other conference games by an average score of 54.0 to 16.5. I have been declaring this Chip Kelly's best team for the last few weeks now, and while injuries may have me second-guessing that, this is a really, really good squad. But Stanford has at least a few things going for it right now.

1. Stanford might take advantage of a thinned-out Oregon front.

You always have to admire the coaches that take a "We don't talk about them because they don't matter" attitude to injuries, and that's certainly what Chip Kelly does. But wow, is this Oregon defense suffering.

Starting free safety Avery Patterson was last seen leaving the field in Berkeley in tears last Saturday, having suffered a knee injury. Patterson was already the second choice at free safety after original starter John Boyett was lost in the opener. Meanwhile, freshmen littered the Oregon defensive line with ends Dion Jordan and Taylor Hart and tackles Ricky Heimuli and Isaac Remington, otherwise known as "Oregon's starting defensive line," on the sideline. All four are once again listed as starters this week (PDF), but there's no question that the injuries are taking their toll on Oregon's defensive output.

Last week, California averaged 5.7 yards per play against a team that, just a couple of weeks ago, ranked second in Def. F/+. The Ducks have now fallen to 11th, and teams are gaining more and more yards on the ground.

Cal did its damage mostly on the ground. A faulty Cal passing attack that was missing both quarterback Zach Maynard and (especially) star receiver Keenan Allen never really had a chance against Oregon's secondary, even without Patterson, and one has to figure Stanford's flawed passing game will only fare slightly better. But the Cal line got a decent push for a stellar duo of backs. Isi Sofele and C.J. Anderson rushed 26 times for 190 yards and a touchdown, and Cal actually trailed by just seven points, 24-17, midway through the third quarter. (Oregon then put on a typical Oregon surge, of course, and outscored the Bears 35-0 the rest of the way.) 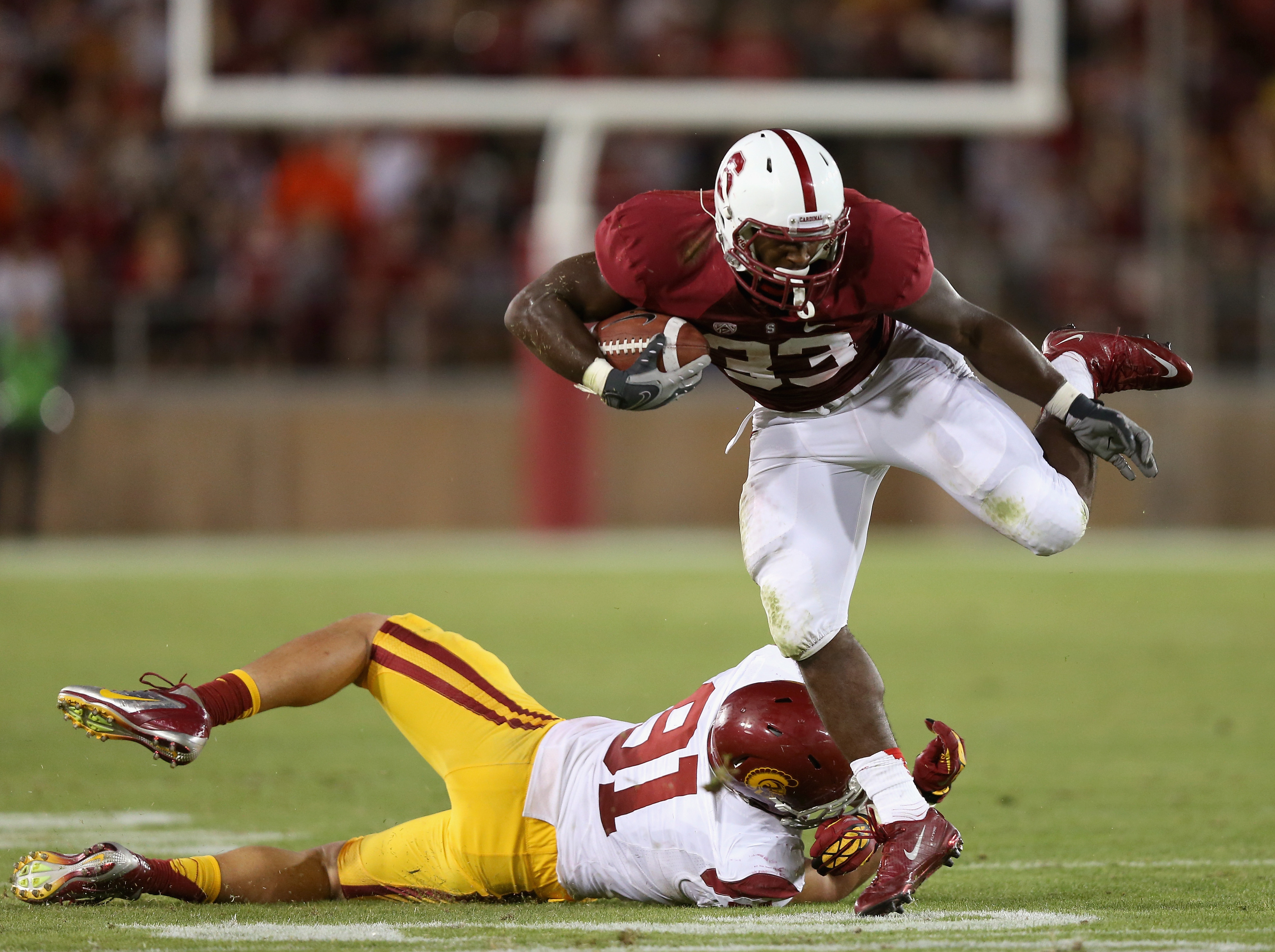 It will be interesting to see if Stanford can exploit Oregon's thin front four as well as California did. As a whole, Cal's run game is a little better than Stanford's (California is 41st in Rushing S&P+, Stanford 63rd), and Stanford's line is a bit in transition this year.

But the Cardinal are incredibly persistent with their run game; as long as they are within striking distance, they will feed opponents a heavy, powerful dose of Stepfan Taylor in the hopes of wearing defenses down later in the game. Not including the Colorado and Duke games (which weren't close enough to keep him on the field), Taylor is averaging 25.1 carries per game, but returns have been sporadic. Taylor averaged 6.3 yards per carry in wins over USC, California and Oregon State but managed just 4.0 versus Washington and Washington State. When healthy, Oregon's defense is still decent against the run, but it is a weakness Stanford can potentially exploit … as long as the Cardinal stay close enough for it to matter.

2. The Stanford defense is as good as ever.

While Andrew Luck justifiably stole the headlines, a big, physical Stanford defense was almost as responsible for the Cardinal's recent success as the offense was. The Cardinal ranked just 102nd in Def. F/+ in 2009 but improved to 11th and 37th in 2010-11 (20th and 25th, respectively, in Rushing S&P+). The offense has regressed post-Luck, but the defense has picked up the slack.

The front seven is bigger and tougher than ever, and the Cardinal currently rank seventh in Def. F/+. The unit is wonderfully well-rounded overall -- eighth in Rushing S&P+, 11th in Passing S&P+ -- but the strength is up front, where they rank second in the country in Adj. Line Yards, an opponent-adjusted measure of the defensive line's ability to hold up against the run. Outside linebackers Trent Murphy and Chase Thomas have just about the most impressive combination of size and athleticism you could hope to see from 3-4 linebackers; the two have combined for 77.5 tackles, 24 tackles for loss, 11 sacks, 11 quarterback hurries, two interceptions, four passes broken up and two forced fumbles. 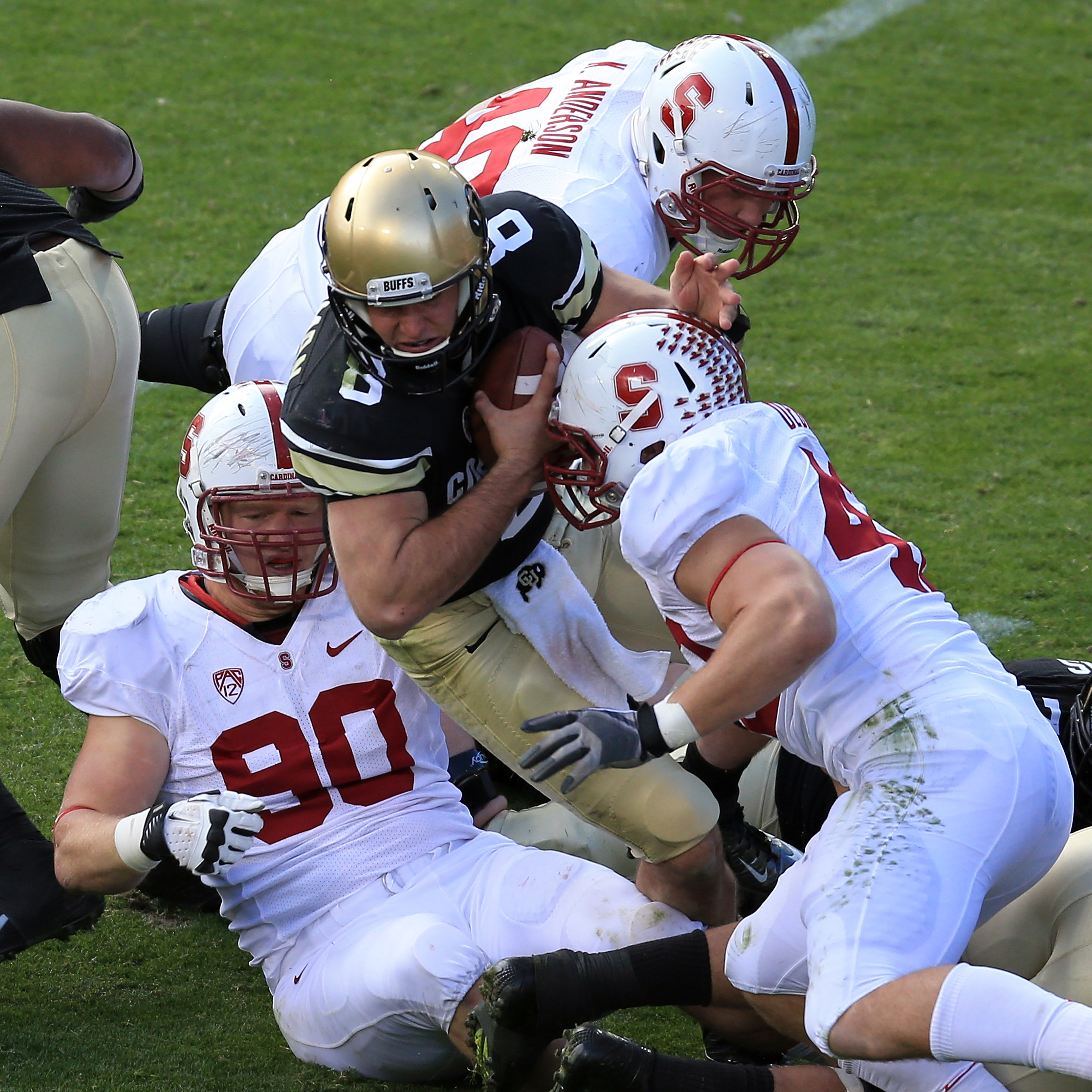 Thomas and Murphy are not alone, however. Even if you remove those two from the equation, the Cardinal would still have 67 tackles for loss on the season, good enough for the Top 30 in the category. End Ben Gardner has added another 12 tackles for loss, and nickel back Usua Amanam could present a unique, aggressive matchup issue. Just 176 pounds, Anaman has been a missile near the line of scrimmage, posting 10 tackles for loss (four sacks) and breaking up six passes. Throw in a couple of ball hawks in safeties Ed Reynolds and Jordan Richards (combined: seven interceptions, 17 passes broken up), and you've got the makings of perhaps the most aggressive defense in the country.

Last week, the California defense loaded up against the run and forced redshirt freshman quarterback Marcus Mariota to beat the Bears with his arm. He DID, mind you (27-for-34 passing, to eight different receivers, for 377 yards and six touchdowns), but the strategy paid off for a little while. Heisman candidate Kenjon Barner gained just 65 yards in 20 carries, and De'Anthony Thomas gained just 13 in five. Oregon had enough depth and balance to figure out how to move the ball eventually -- Josh Huff caught five passes and scored three times, Colt Lyerla added two touchdown catches, Byron Marshall rushed eight times for 43 yards and a score, etc. -- but Stanford might not have to sell out to slow down the run like Cal did. And if they are indeed able to force Mariota to pass, players like Anaman, Reynolds and Richards could serve very disruptive roles.

Over the last two years, Oregon was able to exploit the fact that Stanford's tough, strong defense was not exactly elite from a speed perspective. With players like Anaman further involved, however, Stanford has taken measures to fix that.

Will it be enough? Possibly not. But the gap between Oregon's offense and Stanford's defense may have closed a decent amount.

Oregon enters the home stretch of what it hopes will be another run to the national title game, but the schedule maker has not taken it easy on the Ducks. Notre Dame gets a tune up versus Wake Forest this weekend, and Kansas State travels to face 4-5 Baylor, but Oregon gets Stanford (8-2 overall, 6-1 in conference), Oregon State (7-2, 5-2) in Corvallis, then most likely the winner of Saturday's UCLA-USC game in the Pac-12 title game.

Stanford seems to have tweaked its defense to account better for what Oregon has to offer, and it bears mentioning that the Cardinal had already closed the gap last year, allowing just 387 yards and 6.1 yards per play to the Ducks after giving up 626 and 7.8 in 2010.

Oregon should absolutely win -- three-touchdown favorites tend to do just that -- but Stanford presents a unique challenge and could be more well-equipped to withstand the Ducks this time around. In fact, with a heavy reliance on the run game and heavy speed on the defensive perimeter, it seems the Cardinal are built with beating Oregon precisely in mind. Whether "more well-equipped" means remaining competitive for 60 minutes or just 30 (which would still be an improvement), we'll have to wait and see.