Oregon watched its BCS title hopes slide off the cliff and into oblivion. Kansas State got beat by Baylor. Follow @SBNationCFB

1. Oregon. Standing on the precipice of a BCS title shot and an undefeated season, Oregon peered over the edge, sneezed, and after slipping plummeted headlong into the abyss with a 17-14 loss to Stanford in Autzen Stadium. How did this happen? The usual Stanford victory march: marauding defensive linemen, Shayne Skov crashing plays to pieces in the backfield, and Stanford tight end Zach Ertz catching a touchdown while standing on his head.

Puddles copes just like you and I do: kummerspeck, the German word for emotional eating. 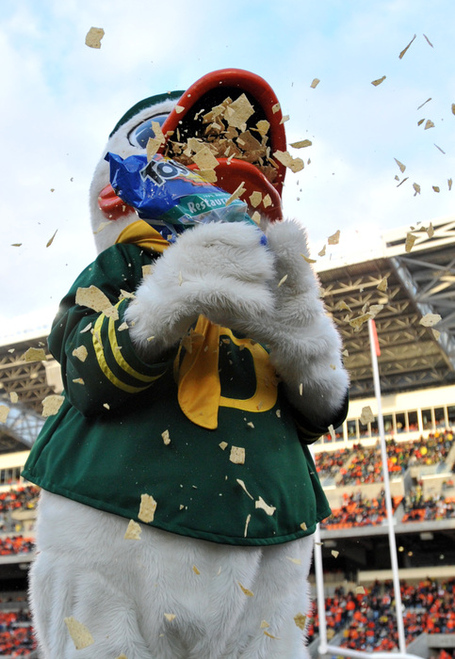 2. Kansas State. Explaining Oregon's collapse is doable (Stanford's defensive line wrecked Oregon's blocking scheme, for instance, upsetting everything the Ducks do offensively). There is literally no explanation for Baylor beating Kansas State by a score of 52-24. Sure, you could buy a 52-48 shootout, maybe, with one team holding serve and emerging as the bullet-riddled victor in a spray-and-pray Big 12 gunstorm. That could have happened, partly because this is the Big 12, and especially because the defensively challenged but offensively potent Baylor Bears are involved.

But this Baylor defense was not even your usual series of clueless AI bots. This team came into the game with the worst defense in FBS football, 120 out of 120 in national rankings, and allowing 37 points a game. The Bears forced Collin Klein -- the Heisman frontrunner prior to this -- into three interceptions. K-State, averaging 40 points a game on offense prior to last night, came in 16 points under its average while allowing 22 more points than it had allowed to anyone this season.

This is, in every sense of the word, a complete statistical aberration. Yet watching it was even stranger because after a quarter or two the game seemed to be utterly in Baylor's hands. It wasn't like Baylor pulled away thanks to a series of fluky turnovers; no, this was a dispatching, with K-State flailing away like they were Kansas -- a team Baylor beat by a not dissimilar score of 56-14 earlier this year.

Now that I've said that, watch Kansas State beat Texas next week like none of this ever happened.

3. Notre Dame. Continued to add to its stellar resume by beating 2006's most surprising 11-win team, Wake Forest, 38-0. Wake Forest. DOMINANCE HAS RETURNED TO SOUTH BEND.* You could mention that computers love Notre Dame's strength of schedule, and indeed rank it as the best in the nation. The Irish also have a brutal defense, and their slapdash offense is not too different from 50 percent of SEC offenses. Are we conflicted about Notre Dame? You bet your ass we are, since they could either be 2006 Florida, or any other contemporary Notre Dame team that finished with double-digit wins, slid into a BCS bowl, and then met hot death in front of a national television audience.

*This year's Wake Forest team is 5-6, and lost to Maryland.

4. Alabama. Successfully passed its leg of the SEC's SoCon challenge by annihilating the Western Carolina Catamounts 49-0. I go to Western North Carolina frequently, and if you had to guess majors at the school strictly by roadside attractions, most of these players major in geodes, gaming machines and country ham. This also happened, albeit with some augmentation by Internet hooligans: 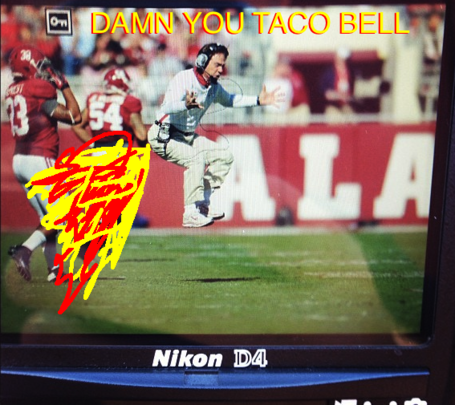 (photo by Vasha Hunt, who unlike me is very good at what he does.)

5. Georgia. Got its training-wheels warmup for the Georgia Tech triple option in a 45-14 rehearsal against Georgia Southern. So doubly cruel for the Eagles because they don't even have Snooky's to go back to anymore, and you are a heartless bastard, Evil Mark Richt.

6. Ohio State. Outlasted Wisconsin 21-14 in overtime, and that shouldn't be a surprise because have you seen Bielema? His cardio needs work, bro. The Buckeyes Need only a win against Michigan to complete an undefeated season that will not count for a national title shot thanks to Gene Smith going to a Gator Bowl last year, and instead choosing to take their postseason bowl ban this year. The Buckeyes lost that game, but Jacksonville is nicer than Miami if you like bridges and abundant adult diaper supplies.

7. Florida. A truly unimpressive 23-0 win over Jacksonville State. Florida's offense downloaded a virus sweeper because a flashing box on the Internet told them to, and now can't even run MS Paint without crashing.

8. LSU. Fought off an Ole Miss team 41-35 in the usual carnival ride Les Miles game (the carnival ride has not been inspected in years, and spits rusty parts on bystanders on every turn, but that and the impending civil suit for injuries are just part of the fun). This happened afterwards, and is already part of the Cycle of the Hat, but two observations before we let this pass over the horizon: a.) Odell Beckham Jr.'s punt return did save the Tigers almost singlehandedly, and b.) I read this to my son this morning, and the first thing I thought of was Les Miles. 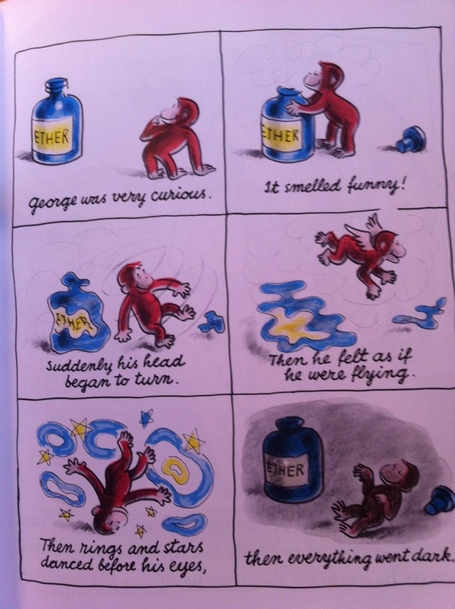 Les Miles was a football coach, and a very good one. He was also very curious.

9. Texas A&M. Johnny Manziel missed an XP attempt, and that is the sole fascinating note from their 47-28 scrimmage against Sam Houston State.

10. Florida State. The Black Ops uniforms for Maryland might have called up Call of Duty in your head. If they did, then you are already a step ahead of me, and imagine the Terrapins as the unfortunate guy respawning over and over again in front of the camper with the knife and sniper rifle. 41-14, Florida State, and Jimbo makes no apologies for taking advantage of shoddy game design, my friend.

11. Clemson. TAJH BOYD HAD EIGHT TOUCHDOWNS. A 62-48 win over NC State takes Clemson to 10 wins, extends a win streak to seven and puts the Tigers in line for slots in the Sugar, Fiesta or Chick-Fil-A Bowls depending on the South Carolina game and the whims of the bowl system. That's a 66 percent chance of prestige, a 33 percent chance of delicious, and a 100 percent chance of a bowl game involving at least eight points between Clemson and its opponent. Zero complaints here.

12. South Carolina. Was tied with the Wofford Terriers late into the third quarter before pulling away for a 24-7 win. To be fair, though, the option is annoying as hell, and it's hard to tackle when you're laughing at Boston Terriers because OMG THEY'RE LIKE LITTLE WISE GARGOYLES, COME HERE YOU LITTLE GREMLIN--

13. Oklahoma. Playing West Virginia means you have to score last. Oklahoma scored last in a 50-49 win over the Mountaineers in Morgantown despite Tavon Austin's 344 yards rushing. <---not a typo <----someone rushed for 344 yards and lost a football game <---someone actually coaches defense at West Virginia<----but not for long.

14. Stanford. The Auburn of the Pac-12 grappled Oregon to its first loss in a 17-14 quagmire. The two schools are more similar than you imagine, since they both have football teams, are referred to by farm-related nicknames, and that's it, really.

15. Oregon State. Beat Cal 62-14 in Corvallis. Please don't look at Cal football; it has turned the bed to the wall, and will face its end alone and with dignity.

16. Nebraska. A routine 38-14 gallop over Minnesota featuring Taylor Martinez, not his evil twin Laytor MarINTez, the one who throws INTs off his back foot with zeal.

17. UCLA. A burly 38-28 win over the Trojans -- its first since 2006 -- also took Matt Barkley out of the game, thus making Notre Dame's path to a BCS Title game berth that much easier. (You're welcome?) P.S. Lane Kiffin did talk to the media, but if you want to imagine him leaving every game like this via helicopter and dastardly deed, then please do.

P.S. Lane Kiffin would totally do this, and Jim Mora did a really, really good job in year one at UCLA.

18. Texas. Bye week, but Mack Brown still had to spend six hours a day selling blenders on the Longhorn Network.

19. Louisiana Tech. Lost a shot at the ETERNAL WAC CHAMPIONS title by losing 48-41 to Utah State in overtime. Does hold the title of nation's worst defense, however, thanks to Baylor's sudden fit of competence in Waco.

20. Louisville. Bye week, most likely spent telling everyone that Syracuse is way, way better than you think. Isn't that right, Missouri?

21. USC. Monte Kiffin cannot return as defensive coordinator next year, but he wasn't the one calling passes on short downs when Curtis McNeal was averaging 7.7 yards a carry.

23a. Texas Tech. Lost 59-21 to Oklahoma State in the Big 12's best game between mascots who carry multiple firearms.

25. Kent State. Avoided the curse of being a ranked MAC team by winning a thriller over Bowling Green 31-24 with a late endzone INT. "These flashes truly are golden!" said a sportswriter from the 1930s as he fell drunkenly off the back of a donkey somewhere between Bowling Green and Akron.