The circle of pain: An ode to college football

From upsets to fortune to miraculous plays to Les Miles, Week 12 may have been college football's masterpiece. Follow @SBNationCFB

Share All sharing options for: The circle of pain: An ode to college football

You want to flee the scene, but you cannot. You stomped to your car, with a faster pace than normal, fueled by a combination of anxiety, hours-old tailgate alcohol and "What just happened?" rage, only to find yourself in an endless line of traffic.

Maybe you then weave through the lot and cut in line and anger other already-angry drivers. Maybe you just sit in your car, resigned to defeat, for a good hour. But you cannot escape your brain, and you cannot escape the fact that your team just lost a game you didn't think it would lose, and at home, no less.

A week ago, you were an Alabama fan, facing an interminable drive back to Birmingham, or Mobile, or Atlanta, or wherever you live when Tuscaloosa isn't once again serving as your temporary home. This past Saturday night, you were an Oregon fan, facing the same drive, only to Portland. Maybe Seattle. Your suffering, almost identical to that of your Alabama cohort, is a rite of passage, passed along in its entirety like evil in a comic book, transferred via handshake. That you took on this pain, that your team lost to Stanford, freed Alabama fans. Their team is right back where they were until last Saturday, when their team unexpectedly lost to Texas A&M.

Welcome to college football, where the only thing as fleeting as life is death.

In Waco, a truly awful Baylor defense became the first to consistently stop Collin Klein and the bruising, automatic Kansas State offense, and the Wildcats' stay at No. 1 lasted just one week. The "It would have been too cheesy and unlikely if it were a movie script" run by Bill Snyder to within two games of the national title game suddenly ended.

In Tuscaloosa, freshly wounded Alabama took care of business in, basically, a scrimmage versus Western Carolina, then watched on television as Baylor crushed Kansas State in Waco and Oregon lost in overtime to Stanford at home.

In Athens, Georgia eventually pulled away from Georgia Southern in its own tune-up, and a few hours later found itself with a clear, concrete path to the national title game.

In South Bend, Notre Dame, which has survived endless opportunities for slip-ups and has withdrawn a decade's worth of good fortune, became your new No. 1 team in the country.

In Bowling Green, Kent State beat Bowling Green, 31-24, reaching 10 wins for the first time. The reward? Fear that its coach is about to be plucked away by a bigger school. Utah State and San Jose State fans can relate.

Welcome to college football, where every big win is accompanied by fear of an even bigger loss.

In College Park, visiting Florida State whipped punchless Maryland, watched a pair of enormous upsets, and felt crippling pangs of regret for the game that got away in Raleigh six weeks ago.

In Ruston, hopes for an improbable BCS bid for Louisiana Tech, the greatest achievement in the program's history, were dashed by a mature and potentially fantastic Utah State team. Louisiana Tech found itself trailing, 41-17, with 16 minutes left in regulation, charged forward to force overtime ... then lost anyway.

In Morgantown, West Virginia turned Tavon Austin into a running back (and a great one), survived a series of early deficits, gained nearly 800 yards, turned a 38-24 deficit into a 49-44 lead ... and lost on a touchdown pass with 24 seconds left. 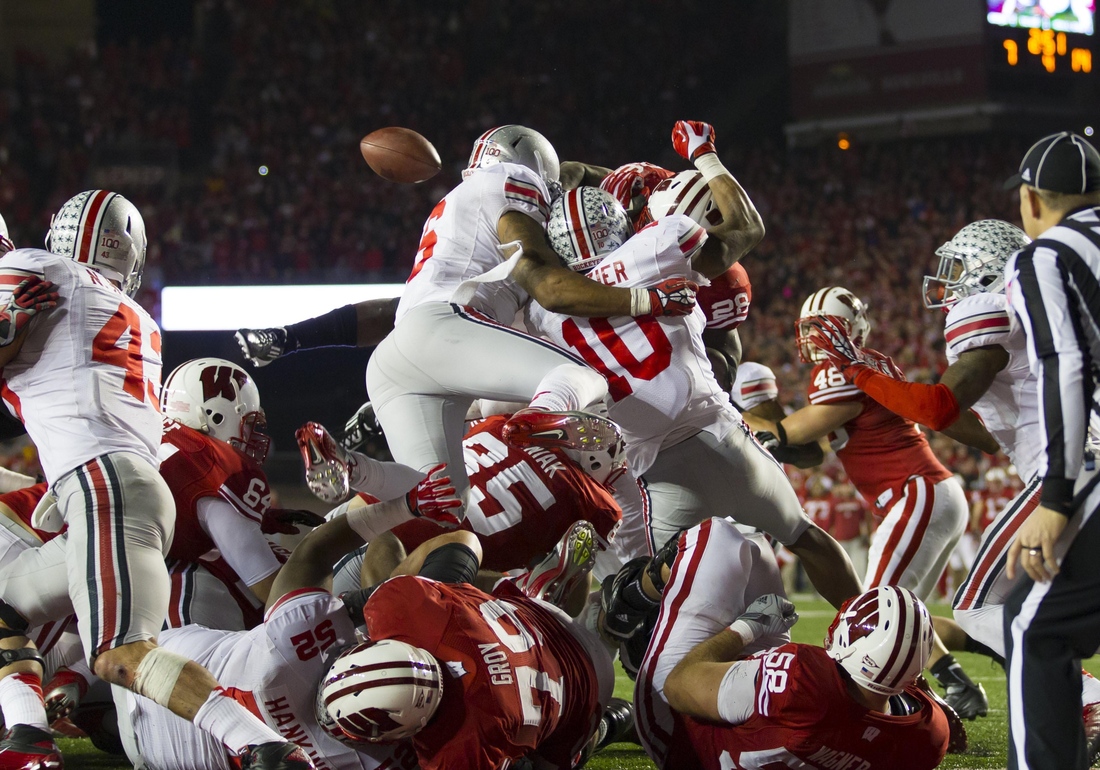 In Madison, with under three minutes remaining in regulation, Wisconsin's Montee Ball, one of college football's most storied runners and the engine for two consecutive Big Ten titles, lunged toward the end zone on fourth-and-goal, reached the ball toward the goal line like he has so many times, and fumbled. The score would have drawn both Wisconsin to a tie with Ohio State on the scoreboard and given Ball a lead in the all-time national rushing touchdowns list. Somehow, Wisconsin tied the game in the final seconds anyway, completing a 14-point comeback … and then lost in overtime.

In Columbia, Missouri, a Mizzou team that had finally gotten back on track for a bowl bid with a comeback win at Tennessee, saw those chances vanish when it couldn't figure out how to stop Alec Lemon, and Syracuse pulled out a 31-27 comeback.

Welcome to college football, where the theory of relativity states that every extreme emotion is but 60 minutes, or perhaps even 60 seconds, away from an equal and opposite emotion.

And where everything is twice as good and twice as bad on Senior Day.

In Nashville, Derek Dooley coached his final game as Tennessee's head man, watching a 13-10 halftime deficit turn into a 41-18 pasting.

In Tempe, Washington State fell behind Arizona State, 32-0, at halftime and lost by 39.

In Boulder, Colorado actually put up a fight for a bit, trailing Washington by just seven at halftime, before losing by 35.

In Ann Arbor, Iowa suffered its fifth loss in a row, a 42-17 thumping at Michigan's hands.

In Chestnut Hill, Boston College rallied to take a late lead, allowed Virginia Tech to force overtime and lost. The Eagles, once models of consistency, have lost nine games this season for just the second time since 1978. 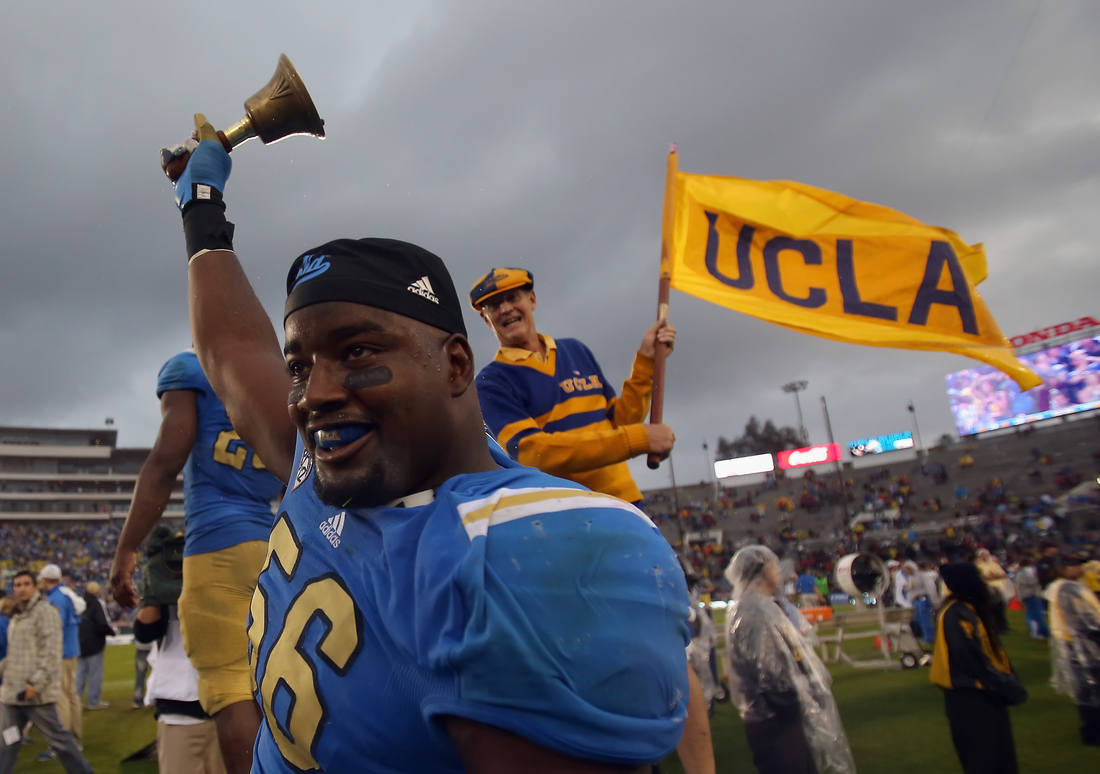 In Los Angeles, UCLA wrested control of both the Pac-12 South and southern California from USC, then injured the Trojans' quarterback for good measure, all but finishing off a devastatingly disappointing USC campaign.

Welcome to college football, where sometimes you can't change the narrative.

In Baton Rouge, this happened.

And then this happened.

Welcome to college football, where we all turn into Les Miles eventually.

Wow, what a game, huh? Are you kidding me?

Welcome to college football, where the flaws, and the pain, and the anxiety are the best part. And where there is always another Saturday to make things even crazier.