As soon as the 2012 schedule came out, we pinpointed Oregon-USC as one half of the year's biggest Saturday. It could still might be remembered that way, but USC's going to have to bring its best game. Follow @SBNationCFB

Share All sharing options for: Oregon vs. USC preview: Why the Trojans can still ruin Chip Kelly's best team

Making predictions in the preseason is damn near impossible. We know this. It doesn't stop us, but we know it.

But even with historical inaccuracy in the back of our heads, we still knew, just knew, that November 3 would be the biggest Saturday of the 2012 college football season for two reasons: Alabama-LSU and USC-Oregon. De facto semifinals! The two games would pit the preseason No. 2 and No. 3 teams in Baton Rouge and the No. 1 and No. 5 teams in Los Angeles. Stupendous!

One problem: only two of the four teams have lived up to Top 5 billing. Instead of improving offensively, LSU has regressed significantly, leaving the Tigers with basically one advantage heading into Saturday's matchup (Les Miles' madness). USC, meanwhile, has slipped up twice. We were probably thinking too much of the Trojans at the beginning of the season ("I understand what people see in them … but I still fear we might be overestimating them based on a two-game sample"), but even if you only envisioned Lane Kiffin's squad as a Top 5 to 10 team instead of Top 1 to 2, you probably didn't envision the Trojans losing to both Stanford and Arizona in advance of their showdown with the Ducks. Now, instead of 2 vs. 3 and 1 vs. 5, we're looking at 1 vs. 5 and 4 vs. 17, according to the BCS standings.

But while the shine has faded at least a bit from these matchups, we probably shouldn't just assume Alabama and Oregon victories just yet. Let's put it this way: if you believe that, in their current states, USC and LSU each has about a 25 percent chance of pulling off a home victory (and that percentage may be too low), that means there's still about a 44 percent chance of one of the two winning. And combined with Oklahoma State-Kansas State, there is a very good chance that we get to see some craziness come Saturday night.

(Small digression: I love that we are basically guaranteed of having a big game to watch on Saturday night, but can we please stop putting all of the big games on Saturday night? The DVR can only handle so much. The biggest 12:00 p.m. ET matchups this week are Temple-Louisville and Oklahoma-Iowa State, and I won't be able to record all of Oregon-USC, Bama-LSU and OSU-KSU in HD. Come on! #FirstWorldProblems)

USC might have a few more issues this season than anticipated, but the Trojans will still have a shot of pulling an upset on Saturday night. Let's take a look at a couple of reasons why that might unfold. 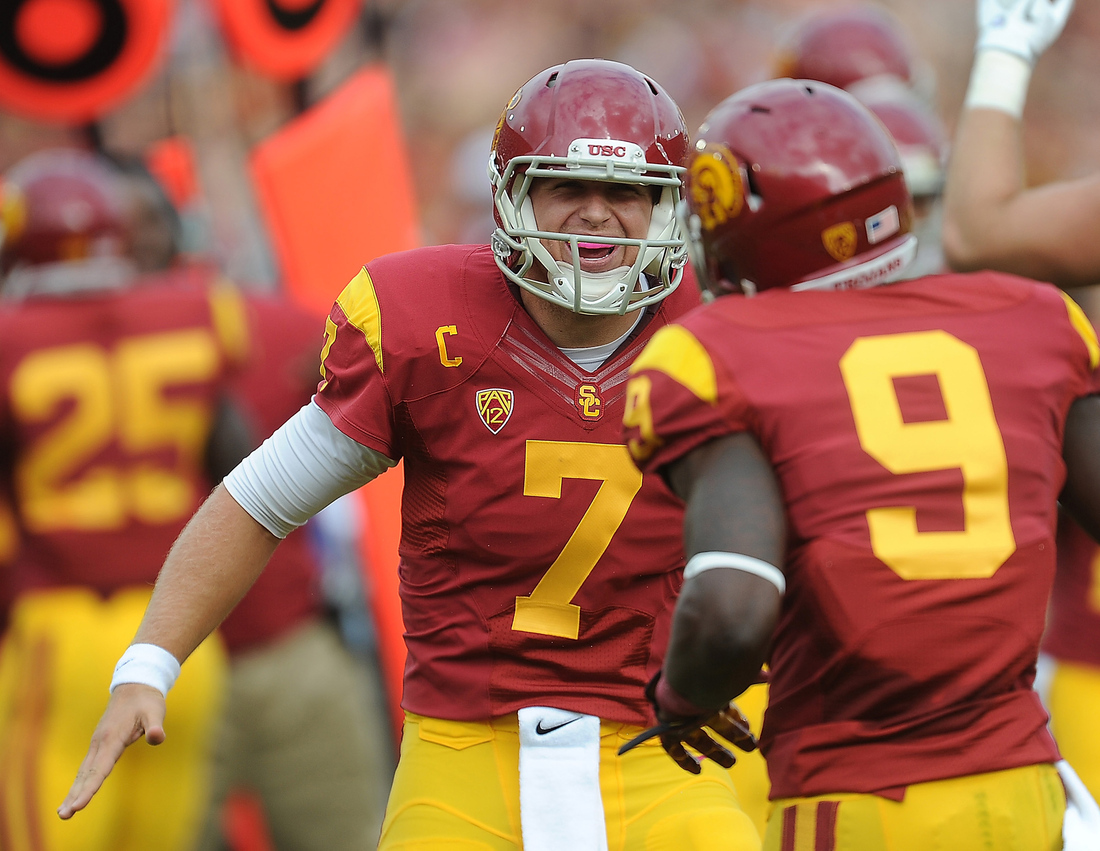 In the eighth game of the 2011 season, things began to fall into place for the USC offense. To that point, the season had been defined by the Matt Barkley-to-Robert Woods pitch-and-catch combination, with a mediocre running game holding the Trojans back and then-freshman Marqise Lee serving as a decent No. 2 receiver. But in games No. 8-12, Lee became one of the best No. 1's in the country, catching 46 passes for 703 yards and seven touchdowns.

How Oregon can slow down USC

In 2012, despite Lee's occasionally spectacular play (10 catches for 197 yards versus Hawaii, 12 for 192 versus Utah), the USC offense has once again taken a while to get rolling. The Trojans scored just 14 points in a loss to Stanford, then averaged a good-not-great 29.7 points versus California, Utah and Washington. The offense, consequently, currently ranks a good-not-great 25th in Off. F/+.

But for the second straight year, Game No. 8 looked like a jumping-off point, even in a loss. Lee asserted himself as a Heisman contender with 16 catches for 345 yards and a huge kickoff return, Woods contributed nine catches for 93 yards, Barkley threw for 493 and three touchdowns, and backs D.J. Morgan and Silas Redd rushed 22 times for 120 yards. Turnovers and faulty defense led to a 39-36 loss at Arizona, but with Lee leading the way, there does appear to be hope for this USC offense. And hey, maybe Matt Barkley just needs the leaves to turn before he can find his fifth gear.

This probably goes without saying, but to beat Oregon, you have to score. A lot. Last year, USC won in Eugene by sprinting out to a 38-14 lead, slowing Oregon down for about two quarters, then holding on for dear life in a 38-35 win. Lee caught eight passes for 187 yards, and USC's running backs carried 32 times for 143 yards and a touchdown.

You cannot slow Oregon down for four full quarters. They are going to surge at some point. And going back to 2008, the last 10 games in which Oregon has either lost or won by 11 points or fewer, opponents have scored at least 28 points eight times, at least 38 four times. (Two trips to Cal have been the outliers, with Oregon winning, 15-13, in 2010 and losing, 26-16, in 2008.) In two games versus Lane Kiffin at USC, Oregon has scored 88 points.

We can go deep into the advanced stats if we want, but the No. 1 prerequisite for beating Oregon is "be able to score a lot of points on a good defense." And with Lee in particular thriving, USC has enough elite offensive talent to do some damage. 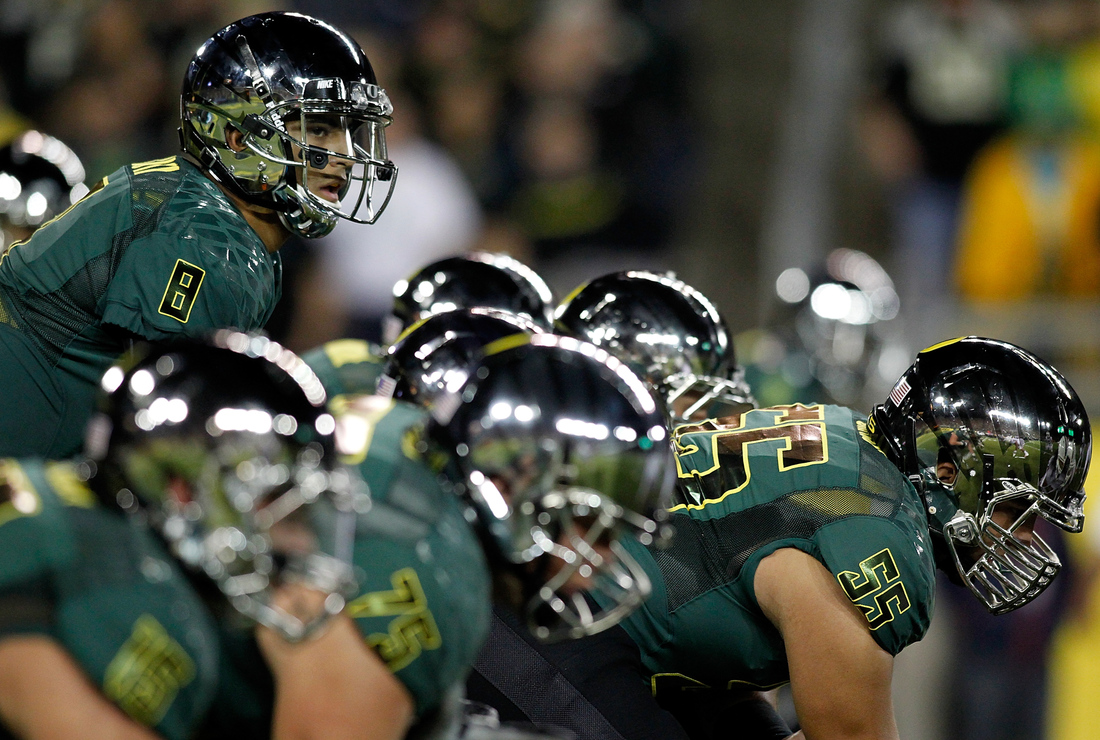 It is easy to forget, considering Oregon is averaging 53.4 points and 540.1 yards per game, but the Ducks employ a redshirt freshman at quarterback. To put it lightly, Marcus Mariota has had a lovely first season in charge of Chip Kelly's offense. Projected for 14 games, Mariota is on pace for 2,600 passing yards, 32 touchdown passes to nine interceptions, and over 600 rushing yards. In the Ducks' BCS runner-up season in 2010, then-sophomore Darron Thomas threw for 2,881 yards, 30 touchdowns and nine interceptions and rushed for 486 yards. With Kelly's system, it really is just plug-and-play at the quarterback position.

How Oregon can run on USC

That said … Mariota is a redshirt freshman, and one who has only played one true road game (at Arizona State). He rushed 10 times for 142 yards and a touchdown in Tempe, but he did gain just 46 yards in 12 pass attempts and fumble twice. And as a redshirt freshman, he is also somewhat reliant on play-calling and standard downs. Oregon is as good as ever on standard downs (first downs, second-and-6 or fewer, third-and-4 or fewer); on passing downs, the Ducks rank just 42nd in the country. (In other words, Oregon's offense has not really met its ceiling under Mariota yet. Scary.)

Because Oregon's defense has grown into one of the more elite units in the country, Kelly doesn't necessarily have to take many chances on second- or third-and-long. Oregon runs 56 percent of the time on passing downs, fifth-most in the country. Among non-service academies, only New Mexico and Georgia Tech run more in such situations. And when he does pass, Mariota is either throwing aggressively to freshman Bralon Addison (14 targets, 11 catches, 157 yards on passing downs) or dumping the ball off. After Addison, only five Ducks have been targeted at least five times on passing downs (Dwayne Stanford, De'Anthony Thomas, Daryle Hawkins, Eric Dungy, Kenjon Barner); those five have combined to catch just 18 of 28 passes for 177 yards (6.3 per target).

Oregon's offense is at its best on first down, when it can literally do anything it wants, knowing you cannot account for every running and passing weapon if can boast. But when you are lucky enough to force the Ducks into second- or third-and-long, you put the ballgame more in the hands of the young man behind center. And if USC is able to semi-regularly stop the Ducks on first down (an enormous "if," by the way), the advantage could shift dramatically in their favor. Of course, the Trojans will have to perform better than they have to date on such downs -- USC's defense ranks an amazingly poor 79th on passing downs -- but "USC has to play really, really well" is a pretty obvious recommendation.

Marcus Mariota is still a redshirt freshman. Lane Kiffin did outcoach Chip Kelly last year. The game is at USC.

Oregon has been untouchable thus far in 2012, but it takes one bad Saturday to change that, and one bad Saturday against USC in November 2011 kept the Ducks out of the national title conversation. That USC has been relegated to the role of spoiler is a bit disappointing, at least as it pertains to the marquee level of this matchup, but USC is still one hell of a spoiler.

I think this is Chip Kelly's best Oregon team yet, but anything less than the Ducks' A-game could make Saturday night a disappointing one.