There's a miniature SEC-vs.-ACC Challenge taking place on Saturday, and it could have lasting repercussions for Georgia's race for the BCS title game and BCS bowl bids in general. We talked about Florida-Florida State on Wednesday. Today, let's tackle the other big two. Here are five questions in need of answering in tomorrow's Georgia Tech-Georgia and South Carolina-Clemson games.

1. How does Georgia handle the Paul Johnson Flex this time around?

Georgia has won three of four games versus Georgia Tech since Paul Johnson took over in Atlanta in 2008. But three of the four in the series have been decided by eight points or fewer. In the last two games in Athens, Tech has rushed for 820 yards (6.2 per carry). In such a unique matchup as this, Georgia's success has been sparing.

In a sense, then, it was half-brilliant, intentionally or unintentionally, for Georgia to schedule Georgia Southern for the week before the Tech game. Southern is coached by Johnson protege Jeff Monken and employs its own version of the Flexbone. The Eagles actually found quite a bit of success against Georgia early on, gaining 165 yards in 31 first-half plays and trailing by just 10 points at halftime.

But Georgia adapted, allowing just 32 yards on GSU's first 15 plays of the second half and coasting to an easy win. So much of battling the Flexbone comes down to unfamiliarity. Georgia will face less of it this time around than normal.

2. What does the Tech defense have to offer?

In the five games since Tech defensive coordinator Al Groh was fired by Johnson, the Yellow Jackets' defense has improved at least a bit. In their first five games versus FBS competition, Groh's defense allowed 35.6 points and 468.6 yards per game (6.2 per play). Since Groh's departure: 29.0 points, 347.2 yards (5.6 per play). Granted, the level of competition has not been high, but there's improvement here if you look for it.

Tech still got torched by North Carolina to the tune of 50 points and 497 yards, and the Tar Heels rank just 25th in Off. F/+. Georgia ranks ninth.

Groh or not, Tech has been an outright sieve on standard downs, ranking 101st in the country. Meanwhile, that's where Georgia thrives. The Bulldogs are both balanced -- running back Todd Gurley crossed the 1,000-yard mark last week, and the Dawgs rank 26th in Rushing S&P+; meanwhile, they rank FIRST in Passing S&P+ -- and deep, with eight different players (three running backs, five receivers) logging at least one play of 30 yards or more. Despite the losses of receivers Michael Bennett and Marlon Brown to injury, quarterback Aaron Murray has found ample targets, from Tavarres King (685 yards, 12.9 per target), to Malcolm Mitchell (444 yards, 10.6 per target), to Arthur Lynch (308 yards, 14.0 per target), to Chris Conley (192 yards, 9.6 per target).

Georgia Tech's defense improves dramatically on passing downs, but will it matter?

3. Who wins in the trenches?

Considering the offense's overall success, Georgia's offensive line has been a bit of a weakness. A decent Tech pass rush could find some success on passing downs, but will it matter considering how awful Tech has been against even decent run-blocking?

On the flipside, Georgia's defensive line has been a bit passive and, at times, ineffective in 2012. The Dawgs rank in the middle of the back in both standing up to run-blocking and rushing the passer. Against the tricky cut-blocking Flexbone, will the Dawgs be taken out of position quite a bit? Eventually stopping Georgia Southern is something, but Tech's offense is still better. Tech could put itself into position for an upset and offset some of Georgia's other advantages if the line battle goes its way. 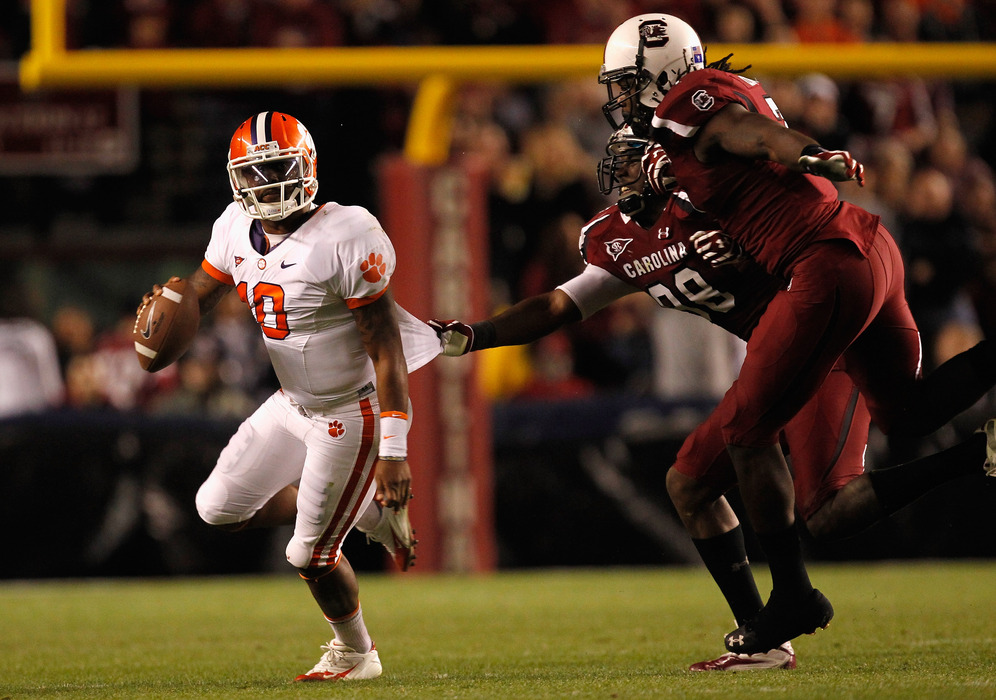 4. So how improved is Clemson's defense?

Sports Illustrated's Stewart Mandel made a good point (with help from a reader) in his mailbag column this week:

Stewart: Has the recent and not-so-recent history of Clemson (including the dreadful verb "to Clemson") tainted the pollsters' ability to accurately and fairly judge the current strengths of the program? Since the entertaining yet disappointing loss to Florida State, a game in which the Tigers proved they could hang with the 'Noles, they've become an offensive juggernaut. Yet their reward for seven straight wins is being stuck at No. 12 in the AP Poll.
-- Tim Martin, Fox Point, Wisc.

I don't normally bite on poll conspiracy questions, but I think there's some truth to this one. Mind you, the Tigers' biggest problem is the ACC's mediocrity. They don't get the bump they might have received in the past for beating Virginia Tech or Georgia Tech. Games against Wake Forest or Maryland are not even going to get noticed. In fact, even last weekend's 62-point outburst against NC State failed to garner any buzz (perhaps giving up 48 points contributed to that). But it's almost as if pollsters are still holding last year's Orange Bowl debacle against Clemson. They're leery of buying in again like they did a year ago, when the Tigers spent much of the season ranked in the top 10. Of course, this may all be moot by Saturday. A win over top-10 foe South Carolina will boost their credibility, and a loss will reinforce how people already feel about them.

At 10-1, Clemson is currently 12th in the AP polls, behind three two-loss teams (LSU, Texas A&M, Stanford) and barely ahead of two others (South Carolina, Oklahoma). While the ACC's incredible 2012 mediocrity is not exactly playing in its favor (Florida State, after all, ALSO ranks behind LSU and Texas A&M despite one loss and a big name), there is still some lingering, and rather justifiable, queasiness about Clemson's defense.

In his first year as defensive coordinator, Brent Venables has shored up parts of the Clemson defense, but the Tigers are still incredibly susceptible to even decent passing games. The Tigers rank a healthy 39th in Rushing S&P+ and should be quite capable to slowing down a hit-or-miss South Carolina run game that was only good (and not great) before Marcus Lattimore's catastrophic injury. With Lattimore down, Kenny Miles has taken the lion's share of the carries and hasn't done much with them. In three games, Miles has carried 51 times and gained 198 yards (3.9 per carry). And that includes a 27-for-127 performance versus FCS Wofford last week. The Carolina run game is in dire straits at the moment, and Clemson could take advantage.

Well, Clemson holds an advantage if Carolina decides to run the ball at all, anyway. It might be smart to just have Connor Shaw pass on every down. Not only has the passing game been a strength for the Gamecocks in 2012 (Shaw is completing 67 percent of his passes and has 15 touchdowns to seven picks, and S.C. ranks 15th in Passing S&P+), but it is still an extreme weakness for Clemson. The Tigers rank 103rd in Passing S&P+ and 76th in Adj. Sack Rate and are coming off an absolute torching at the hands of N.C. State quarterback Mike Glennon. Now, you could do a lot worse than Glennon at quarterback, but let's just say that his 29-for-53, 493-yard, five-touchdown performance was probably as indicative of Clemson's defensive issues as it was of Glennon's prowess.

Carolina has a unique, interesting passing game -- Shaw will make an infinite number of short, risk-free passes to receiver Ace Sanders or tight end Justice Cunningham until you prove you can stop it, and if you play too close to the line of scrimmage, he will pierce you with deeper passes to Sanders and Bruce Ellington, both of whom are small, stout, and very fast. This will be the biggest, most public test of Clemson's defense since the Florida State game. What do the Tigers have to show us?

5. Has anybody noticed how well Tajh Boyd has been doing lately?

Granted, your job is pretty easy when you've got Andre Ellington in the backfield with you and DeAndre Hopkins and Sammy Watkins lined up wide. But wow, has Boyd been posting some crazy stats of late. Since struggling a bit in a win over Virginia Tech, Boyd has posted the following stats in his last four games:

Projected over 12 games, that's a pace of 4,300 passing yards, 750 rushing yards and 66 total touchdowns. Of course, these performances have also come against Wake Forest, Duke, Maryland and N.C. State. Of the four, only Maryland's defense is relatively interesting, and the Terps are struggling with injuries. South Carolina's defense is in a completely different league.

If Clemson is to win this game, Boyd will need to post good stats, of course, but he will also have to limit mistakes. He doesn't tend to make just small ones. He threw three picks against Duke, fumbled twice against Maryland and threw two more picks against N.C. State. He is the perfect definition of "high-risk, high-reward," and the Tigers will need far more of the latter than the former against Jadeveon Clowney and a South Carolina defense that ranks 10th in Def. F/+.