Northern Illinois is far from the most overmatched BCS team ever. In fact, Florida State will have to play a complete game in order to avoid the upset. Follow @SBNationCFB

Share All sharing options for: FSU vs. NIU, Orange Bowl preview: The Huskies are good enough

* It should be noted that, as the highest-ranked team from a non-Top 5 conference, NIU would also have qualified for a major bowl in our future playoff system as well. So hostility at "The BCS" is also misdirected. Not that that has ever stopped anybody before.

There. Now that we've got that out of the way, let's talk about the actual matchup NIU faces in South Florida on January 1.

Northern Illinois is much better than N.C. State.

Here is a list of Florida State's 2012 FBS opponents, in order of F/+ ranking:

(Small digression: the ACC was just awful this year, wasn't it? FSU seriously won a BCS conference title while beating one team ranked better than 47th?)

I have long said that your performance against bad teams is as suggestive of your overall quality as your performance against good teams. In this case, the advanced stats agree; Florida State ranks 12th in F/+ this season, powered primarily by dominant performances against particularly bad teams. But before you decide that FSU is too dominant and will beat a smaller MAC team, realize that the Seminoles have only outscored Top 70 opponents in 2012 by an average score of 28.8 to 24.7. NIU is much better than not only N.C. State (which somehow beat FSU on October 6), but also Georgia Tech and Virginia Tech, both of whom came awfully close to taking out the 'Noles.

This is not to say that FSU shouldn't be the favorite, of course. FSU is favored by 12.5 right now, and that jives almost perfectly with the F/+ projections (FSU by 12.4). But Florida State dominates on the scoreboard only when it can physically dominate on the field. Perhaps that will be the case in the Orange Bowl. But is very, very far from guaranteed. 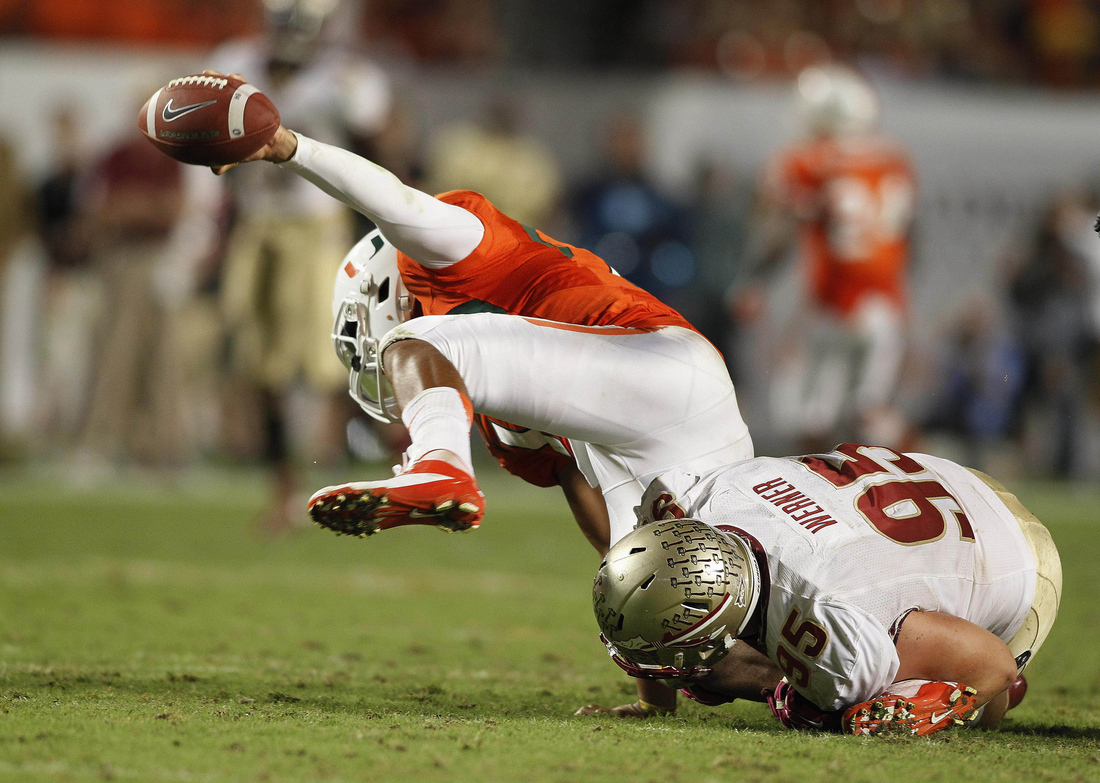 NIU would be well-served to ditch the empty backfield.

A no-back set is the ultimate "We're better than you" formation. If you have superior athletes at the skill positions, or if your receiving corps is simply deeper than your opponent's secondary, you can throw easy passes out of an empty backfield and pile up the yards after catch. If your offensive line is better than your opponent's defensive line, you can protect your quarterback with just five blockers and let him either eventually find receivers or run QB draws to where linebackers should be (but aren't, because they are guarding receivers). If you have more talent than the defense you are facing, the no-back formation is for you.

Against Kent State, NIU found lovely success from the no-back formation. Operating with an empty backfield about 23 percent of the time, the Huskies averaged 8.3 yards per play from this set. Jordan Lynch completed five of seven passes for 72 yards (with one sack) and peppered a decent Golden Flashes defense with successful quarterback draws. NIU has better athleticism than perhaps any defense in the MAC, and it took advantage quite frequently this season.

NIU does not, however, have better athleticism than Florida State's defense. Obviously. Even with a banged-up front four, Florida State has far more talent, size and speed than any defense NIU has faced this season. The Seminoles rank 12th in Def. F/+ -- a bit of a disappointing number, honestly, but one that can be partially explained by the loss of star end Brandon Jenkins one game into the season -- and while they have a bit of a blind spot on passing downs, they are really good at forcing passing downs. And if NIU lines Lynch up in an empty set on a passing down, he is going to have about 0.6 seconds to make a decision. Back in September, Clemson attempted an empty set against Florida State four times. They gained one yard.

If you do not have superior talent, the no-back just does not offer you many options. Either you throw to well-covered receivers who will get tackled for short gains (assuming the ball gets to them), or you have your quarterback standing in a quickly imploding pocket. NIU tries to throw aggressively downfield from an empty set (68 percent of all their passes against Kent State were thrown at least five yards downfield, a higher rate than those of a lot of spread offenses).

That is not to say that NIU's offense is doomed, however. The empty backfield is but part of the Huskies' arsenal. It was the most successful part against Kent State, but NIU did still average 5.7 yards per play when lined up with either one or two backs at the snap. NIU uses a lot of motion (so a lot of the one-back sets were really empty backfields with a back motioning into the backfield at the snap) and found great success at getting running back Akeem Daniels the ball on the edge of the defense. The emerging Daniels, who has carried the ball 29 times in the last two games after getting just 36 carries in the first 11 games, gives the Huskies an inside-outside combination. Jordan Lynch will pummel you with quarterback draws up the gut while Daniels tests your speed. It is a fine combination, one that would have probably been enough to beat Iowa had the Hawkeyes and Huskies not played on the first week of the season, when Lynch was a first-time starter and Daniels was not yet a full-time contributor (Leighton Settle began the year as NIU's primary back).

Honestly, Daniels is the key here. Lynch is a strong, decisive runner who breaks tackles (he had eight of NIU's 10 broken tackles against Kent State), falls forward, and takes advantage of any defense that takes its eyes off of him for a second. He pummeled Kent State for 123 yards on 15 quarterback draws and another 32 yards on nine option keepers. But he is a power back of sorts. Daniels is probably the only skill position athlete NIU has who can test FSU's defense. No. 1 receiver Martel Moore (1,054 yards, 9.8 per target, 66 percent catch rate) has averaged 14.8 yards per catch in 2012 but caught just four of 12 passes for 39 yards against Kent State. Perez Ashford and Tommylee Lewis are decent possession options, but none of these three is a major yards-after-catch threat against a good defense, especially not against FSU's defense. Clemson completed just nine of 25 passes thrown at least five yards beyond the line of scrimmage; NIU might do better than that but probably not well enough unless some broken tackles are involved.

NIU could keep itself in the game with good play-calling and execution and a decent battle in the field position game, but Daniels needs to break free for the Huskies to have a strong chance of actually winning. He has exploded recently: In the first 11 games, he carried 36 times for 192 yards and four touchdowns and caught 14 passes for 125 yards; in the last two, he has carried 29 times for 240 yards and five scores and caught four passes for 67 yards (almost all of which were yards after catch). He will need to have a lovely game because Lynch alone isn't going to beat Florida State.

To blitz, or not to blitz?

Florida State's offense is, in a word, unique. Like Nebraska, the Seminoles attempt quite a few passes with their mobile quarterback on standard downs in order to minimize passing downs -- it works: FSU is 10th in the country in Standard Downs S&P+ -- and they go relatively conservative when they do fall behind schedule. They use the threat of the run as much as the run itself, and it has worked out pretty well for the most part. FSU has scored at least 28 points in 10 of 13 games this season and has averaged 43 points per game against teams outside of the Def. F/+ Top 25 (i.e. teams not named Florida or Virginia Tech).

Going by Def. F/+, NIU's is the third-best defense FSU has faced this season. The Huskies rank 35th overall, an aggressive and mostly effective unit that has logged 40 sacks (even adjusting for opponent, they are third in the country in Adj. Sack Rate) and 98 tackles for loss, forced 15 fumbles and defensed 82 passes (15 interceptions, 67 passes broken up). This is a unit based on speed -- the linebackers on the two-deep average 5'11, 220 points; the defensive ends average 6'1, 235; the defensive tackles average 6'1, 287 -- and the Huskies had enough of it to get through the MAC slate unscathed and rarely tested. They are actually well-built to handle an offense that passes frequently on standard downs (if FSU chooses to do that instead of attempting to soften NIU up with running backs Devonta Freeman and 226-pound James Wilder, Jr.); the problem is that, if they do not bring down the passer on passing downs, they are likely allowing a first down. NIU ranks 32nd in Standard Downs S&P+ but only 88th on passing downs. Whereas senior corner Rashaan Melvin (18 passes defensed) is active and exciting, fellow corners Marlon Moore, Sean Evans and Jhony Faustin perhaps leave something to be desired.

Adding to this difficulty for NIU is the simple fact that E.J. Manuel seems to make better decisions when he has less time to make them. In the ACC championship, when Georgia Tech rushed either three or four defenders, thereby dropping either seven or eight into coverage, Manuel completed 12 of 17 passes, but for just 104 yards; he was also sacked twice, dropping his per-attempt average to 4.8 yards against an iffy Yellow Jacket defense. But when Tech blitzed, Manuel completed all six of his passes for 57 yards. FSU receivers could never really break free against Tech (they logged only two broken tackles, both by Greene), which certainly gives NIU at least a bit of hope.

But the Huskies will face a bit of a conundrum against Manuel. Assuming they are able to force a decent number of passing downs (and again, if Freeman and Wilder are able to get rolling on the ground, they might not), NIU must decide how much it wants to blitz; the Huskies are good at it, but their secondary might need some help, and Manuel makes better decisions when he simply reads and reacts. Against a cloud of defenders in passing downs, his fight-or-flight tendencies can let him down, and he can eventually fall into some coverage sacks. It will be strength-vs-strength and weakness-vs-weakness on FSU passing downs, and NIU will absolutely need to make stops in these situations.

This game will turn on…

…Akeem Daniels' success. NIU doesn't have a lot of margin for error here, but if Daniels can find some open field, NIU should move the ball well enough to give itself a shot.

Again, the margin for error is small, but it does exist. NIU is a good team -- not the best mid-major out there this year (according to F/+, the Huskies fall behind No. 21 Utah State, No. 22 Boise State and No. 30 Fresno State), but good enough to give FSU problems, especially if the wrong FSU shows up. The Seminoles are the favorites for obvious reasons, but their range of effort and production has varied wildly in 2012.

Good FSU, the one that scoffs at physically inferior opponents, wins this game handily and sets the table for another Top 10 preseason ranking next season; Bad FSU, however, the one that falls asleep for at least a while against any semi-decent team, will lose. What say you, 'Noles?