Hokies players have worn a special ribbon on their helmets in practice this past week, honoring the victims of the Virginia Tech attack in 2007, and the attack in Sandy Hook earlier this month.

Virginia Tech certainly knows and feels the pain of those in Sandy Hook, Conn. -- and the school's football team is doing its best to honor the Sandy Hook victims.

Frank Beamer and his Hokies have been wearing helmets with ribbons on them, honoring those who fell in both attacks. The ribbon is green and orange, representing each school's colors, with "58 prevail" written on it.

Thanks to Christian Bruey of WFTV, here's a photo of the helmet that Virginia Tech players have been wearing in practice. 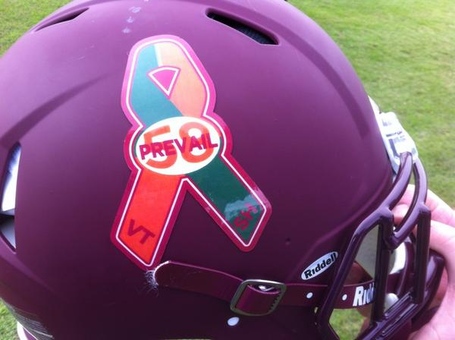 Virginia Tech players will wear a smaller version of the same ribbon on their helmets on Friday, when they take on the Rutgers Scarlet Knights in the Russell Athletic Bowl.