Share All sharing options for: Top 100 college football games of 2012 countdown: The Top 10

10. Notre Dame 29, PIttsburgh 26 (3OT) (November 3). No, a national title contender shouldn't have struggled this much with Pittsburgh, even if the Panthers were much better in November than September. Yes, Notre Dame suffered a bit of a hangover the week after winning at Oklahoma. Yes, there was a little bit of luck involved along the way. And yes, this game was incredible regardless.

9. MAC Championship: Northern Illinois 44, Kent State 37 (2OT) (November 30). Toledo's win over Eastern Michigan was the most MACtion-worthy game of the season. But with the unlikeliest of BCS bowl bids on the line, the game between 11-1 Kent State and 11-1 Northern Illinois had the most drama. Kent State raced to a 10-0 lead, but NIU went on a 27-3 run to take complete control of the game. Having completely stalled out, however, the KSU offense responded. Quarterback Spencer Keith found star running back Dri Archer for a 60-yard pass, and a five-yard Keith run completed a shocking, 96-yard touchdown drive to get the Golden Flashes to within seven points...

...and 15 seconds later, the game was tied when Zack Hitchens took a fumble 22 yards for a score. But we were just getting started. NIU needed only 90 seconds to score and take a 34-27 lead, but Kent State responded again. Keith found Matthew Hurdle for 11 yards on third-and-10, Chris Humphrey for seven yards on third-and-3 and, with 44 seconds left, Tim Erjeavec for a 19-yard touchdown on third-and-7. In overtime, Kent State nearly lost a fumble on its opening possession following an ill-advised trick play from the NIU 7, both teams exchanged field goals, and the game finally ended when, down a touchdown, Keith threw an interception to Demetrius Stone on fourth-and-8 in the second OT. A day later, NIU found out it was going to the Orange Bowl.

8. Stanford 17, Oregon 14 (OT) (November 17). November likes to clean up messes. We entered the regular season's final month with four undefeated, name-brand teams fighting for two spots in the BCS title game. Alabama went down to Texas A&M (we'll get to that one), leaving just three undefeateds. And then November 17 happened. Not only did Kansas State get whipped by Baylor, but Oregon also fell. The Ducks came into their game versus Stanford averaging 563 yards and 55 points per game, but the Cardinal defense played its best game of the season, holding the Ducks to 14 points, limiting star back Kenjon Barner to 66 yards on 21 carries, and somehow overcoming a serious turnovers disadvantage to claim victory in Eugene.

Oregon turned the ball over on downs at the Stanford 7 in the first quarter and missed a 42-yard field goal in the third, and with just over 90 seconds remaining, redshirt freshman Kevin Hogan, in just his second start, found Zach Ertz for a 10-yard score to tie the game at 14-14. In overtime, Oregon kicker Alejandro Maldonado, who in 2011 missed a field goal that eventually prevented Oregon from a spot in the national title game, did it again; he hit the crossbar with a 41-yard field goal attempt. However, Jordan Williamson, the Stanford kicker whose misses cost the Cardinal dearly in the 2012 Fiesta Bowl against Oklahoma State, found redemption. His 37-yard field goal gave Stanford an unlikely win and eventually pushed the Cardinal into the Rose Bowl. 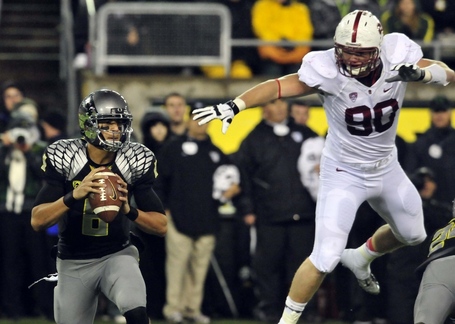 7. Alabama 21, LSU 17 (November 3). No, the LSU defense did not go into a prevent defense at the end. Yes, Alabama quarterback A.J. McCarron came up with some amazing, late-game heroics (after being dramatically outplayed by LSU's Zach Mettenberger) anyway. But the drama was only beginning for Alabama on its way to the 2012 national title.

The only thing better than the return is the series of reaction shots afterward. And the fact that UNC accidentally got a two-point conversion after the touchdown as well.

5. West Virginia 70, Baylor 63 (September 29). Honestly, WVU-TCU was more dramatic and probably more interesting. But this game ranks above all other Big 12 shootouts in 2012 for the sheer statistical obscenity. Nineteen touchdowns, 10 scores that either gave one team the lead or tied the game, 700 yards for the losing team, 807 yards for the winner. WVU's Geno Smith seized complete (and brief) control of the Heisman race by completing 45 of 51 passes (a cool 88 percent completion rate) for 656 yards and eight scores. WVU's Tavon Austin caught 14 passes for 215 yards and two scores and was the third-best receiver in the game behind WVU's Stedman Bailey (13 for 303 and five touchdowns and Baylor's Terrance Williams (17 for 314 and two). The teams passed for 41 combined first downs, then rushed for another 22. Baylor converted 11 of 16 third downs, and WVU converted 12 of 15.

Et cetera. Make no mistake: These teams had bad, bad defenses for most of the season. But these offensive accomplishments would have been impressive versus a high school team. This was more an endurance test than a display of balanced, high-quality football. It was also one of the most memorable, enjoyable-for-what-it-was games of 2012.

4. New Mexico Bowl: Arizona 49, Nevada 48 (December 15). WVU-Baylor does not, however, win Shootout Of The Year. Instead, that goes to a game that took place in front of 24,000 people in Albuquerque. The statistics of this one were impressive (and absurd) enough -- Nevada gained 659 yards, Arizona gained 578, there were 60 first downs and 17 trips inside the 40-yard line, Nevada's Cody Fajardo passed for 256 yards and rushed for 140, star backs Stefphon Jefferson (Nevada) and Ka'Deem Carey (Arizona) combined for 352 rushing yards and five scores, and Arizona's Austin Hill caught eight of 11 passes for 175 yards and two scores.

But this game beats BU-WVU because of the ending.

Nevada had built an early 21-0 lead but relinquished it quickly, and the Wolf Pack led just 31-28 at halftime. They reopened a hefty lead, however, going up 45-28 late in the third quarter. When UNR's Allen Hardison kicked a 25-yard field goal with 1:48 left, that was the ball game. Nevada led, 48-35, and Arizona would have to score twice to win. No way. But Matt Scott completed passes of 14, 15 and nine yards, Nevada committed two pass interference penalties, and Hill scored on a two-yard strike to cut Nevada's lead to 48-42 with 46 seconds left. And then Arizona recovered the onside kick. And then Scott completed passes of 28 and 21 yards to the Nevada 2. When Scott completed another two-yard scoring pass to Tyler Slavin, it finished up the most improbable, and enjoyable, comeback of the bowl season, and probably of the season as a whole.

But the fact that the hit meant something to the game itself, that it came amid four lead changes in the game's final 15:02, and that this happened eight minutes later...

...makes this one of the best games you'll ever see.

2. Texas A&M 29, Alabama 24 (November 10). I'm not sure if Alabama slipped a bit in 2012, or if the SEC caught up to the Crimson Tide, or if the law of averages just asserted itself and decided Bama had been winning too many games, too easily. But whatever it was, Alabama played in three of the season's seven best games in a single month's span this fall. They went 2-1 in such games, and it allowed them to win the national title. But after they dropped this one, they needed help from Kansas State and Oregon to get back into position to even qualify for the title game.

This one had everything. It saw Johnny Football turn into Johnny Heisman (Johnny Manziel completed 24 of 31 passes for 253 yards and two scores and rushed for 107 non-sack yards against possibly the best defense he had faced all season). It saw Alabama overcome one large deficit (20-0 after 14 minutes) and almost overcome another. It saw too many momentum shifts to count, and it saw Texas A&M simply outexecute and outplay Bama in the final minutes. Bama's comeback felt inevitable, especially as they drove for the winning score with under two minutes remaining. But DeShazor Everett and the Aggies had other ideas.

1. SEC Championship: Alabama 32, Georgia 28 (December 1). The game was already guaranteed a spot in the top three or four of this list before the final minute. Bama's Eddie Lacy and T.J. Yeldon had rushed for 334 yards and three touchdowns, Georgia had already put up an incredible fight, and Alabama's Amari Cooper had already scored what felt like the SEC title clinching 45-yard touchdown with 3:15 remaining. But Georgia got the ball with 1:08 left, and we witnessed one of the most dramatic minutes in college football's history.

And for the record, I still think it was the right call to run up and attempt another play instead of spiking the ball as expected. Georgia had gained 64 yards in three snaps, and Alabama's head was spinning. It didn't work, but that doesn't mean it was wrong. And it adds to the mystique of this already-amazing game.