Pennsylvania's governor sued the NCAA for its actions against Penn State. While nobody thinks the NCAA deserves to be sued more than we do, a little digging reveals that this lawsuit is nothing more than a meritless political stunt.

As I have stated before, the NCAA is a banana republic that deserves to be litigated to death. So when Pennsylvania Governor Tom Corbett's sued the NCAA for imposing sanctions against Penn State my reaction was, "all right, stick it to the man!"

But then I looked at the actual complaint. The lawsuit sucks and will likely get thrown out of court. And if you look at the circumstantial evidence, this all seems like a political stunt and waste of taxpayer money, even if it is in pursuit of a deserving adversary. So let's do a Q&A with a made-up non-attorney to explain why this lawsuit is a turd.

Q: Okay, smart guy. What makes this lawsuit so bad?

A: It ignores the concept of standing. Do you know what standing is?

Q: Not in the legal sense.

A: A party to a lawsuit has to have a direct stake in the outcome, otherwise known as standing. You can't just bring a lawsuit when you haven't been wronged, and you can't be sued if you haven't wronged someone.

Q: Why is that important?

A: Well, courts are really good at doing one thing; resolving disputes between two adverse parties. If two parties are not in direct dispute, then their differences are better resolved elsewhere.

Q: Why doesn't the state of Pennsylvania have standing in a lawsuit involving Penn Sate? It's called Penn State for a reason.

A: Well, back when the NCAA handed down sanctions against Penn State, Corbett praised the sanctions and noted that, "no taxpayer dollars will be used to pay the fine." So the Commonwealth of Pennsylvania is not being directly harmed by the sanctions. It's like if you hit your friend in a car accident, and I sued you because I lost business from your friend while he was in the hospital. A court would tell me to piss off because I don't have a big enough stake in the outcome.

Q: So why did Pennsylvania say that it could bring the lawsuit?

A: In the lawsuit itself Pennsylvania argues that, under state law, it is allowed to bring complaints on behalf of its citizens and institutions.

Q: So then this lawsuit is allowed under state law.

A: Right. But this is a lawsuit in federal court, on a federal action (violation of the Sherman and Clayton Antitrust Acts). If the NCAA violated a state law in Pennsylvania, then the governor would have grounds for bringing this suit. But when your lawsuit concerns federal law you need to have standing under federal law.

Q: Does Pennsylvania have standing under federal law?

A: Probably not. With the help of my crack SB Nation legal team we found this article that explains in depth why the state of Pennsylvania doesn't have standing under federal law. The relevant portion reads:

Corbett said at the press conference he was suing on behalf of the students, as well as "the citizens of Pennsylvania, the business in State College and across Pennsylvania who are being harmed by this. Parens patriae standing is quite broad, but most federal appellate courts have taken a dim view of states bringing parens patriae lawsuits where the state can't prove a direct damage to itself, as compared to economic harms to its citizens. See, e.g., In re Baldwin-United Corp., 770 F.2d 328, 341 (2d Cir. 1985) ("[W]hen the state merely asserts the personal claims of its citizens, it is not the real party in interest and cannot claim parens patriae standing."); accord Louisiana ex rel. Caldwell v. Allstate Ins. Co., 536 F.3d 418 (5th Cir.2008)(w/o non-sovereign interests, which would not provide a state with standing for a parens patriae action, are proprietary interests and private interests pursued by the state, where the state is only acting as a nominal party); compare Com. of Pa. v. Mid-Atlantic Toyota Distributors, 704 F.2d 125 (4th Cir. 1983) (a state can have a legitimate public interest in ensuring the economic well-being of its citizens and in indirectly promoting a smoothly functioning economy freed of antitrust violations even though the most obvious beneficiaries may be individual consumers who ultimately recoup money damages).

In case you're not familiar with legalese, when a state sues on behalf of economic harms to its citizens, a federal court will tell the state to get bent in most circumstances because it doesn't have standing.

Q: Shouldn't the State of Pennsylvania have tried to include a better theory of why it had standing in its lawsuit?

Q: Yeah, that is weird. Why does the governor get to sue?

A: Well, it just so happens that Pennsylvania has a state law that allows the attorney general to delegate a lawsuit to the governor's office. Pennsylvania has another quirky state law: it elects its governor in midterm election cycles (i.e. 2010 and 2014) but it elects its attorney general in presidential election cycles (i.e. 2008 and 2012). When Corbett was elected governor in 2010, he got to appoint a successor to fill out his term. That successor, Linda Kelly, has known Corbett for over 30 years, so asking her for permission to bring a lawsuit probably wasn't a big deal.

Q: Wait, so there was just an election for attorney general in Pennsylvania. Did Kelly win re-election?

A: No, she didn't even run for re-election. So on January 15, Pennsylvania's new attorney general, Kathleen Kane, will be sworn in. Kane is a Democrat who won in part by criticizing Corbett's handling of the Penn State investigation as attorney general. My guess is that she would refuse to delegate a lawsuit to a man she criticized as an incompetent lawyer and administrator.

Q: So is that why Corbett is suing now?

Q: Does Corbett think that this lawsuit will help his chances for re-election?

A: My guess is yes, because politicians typically do things that help them win re-election. I made a helpful map of the state of Pennsylvania for you: 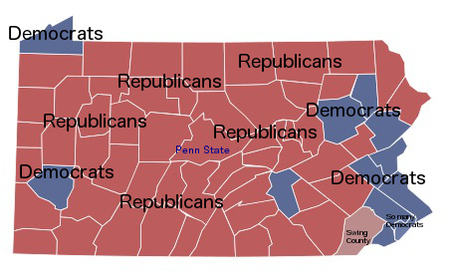 That's a 2012 election map, which President Obama won with 52 percent of the vote. You can see that voters who live closer to Penn State are more likely to be Republican. It's not a blanket statement: leading Paterno apologist Franco Harris is a prominent Democrat, and plenty of Republicans in Pennsylvania don't give a shit about Penn State football. But if you're Corbett and you look at that map you probably figure people who likely support you also likely are Penn State football fans who hate the NCAA sanctions.

Q: Does Corbett need to bolster support among his political base?

A: Oh yes. In a November poll he trailed a generic Democratic opponent 47 percent-37 percent. If you look at the poll's crosstabs you'll see that 20 percent of people who describe themselves as "conservative" and 18 percent of people who describe themselves as "very conservative" would vote for a Democrat over him. He can't win with numbers like that. He probably thinks those conservative Penn State fans would rally to his cause while people who don't care about Penn State will remain indifferent to the lawsuit.

As I noted earlier, the lawsuit itself is a dud. Litigation can take a long time, but, even after exhausting all of their appeals, this lawsuit could get thrown out of court by the time of the 2014 election. Corbett probably wanted to bring suit in 2014, but with Kathleen Kane about to deny him the ability to sue the NCAA he had to act fast, but as close to the deadline as possible. Hence the bullshit, "wait until football season is over" excuse.

Q: So much for Tom Corbett making history by taking down the NCAA.

A: Tom Corbett can make history in another way though. In 1968 Pennsylvania amended its constitution to allow governors to run for two consecutive terms instead of just one. Since then, every governor of Pennsylvania has won re-election. But if Pennsylvania voters see Tom Corbett for the crass political opportunist and incompetent lawyer that he is, then he could be the first ever governor to lose his re-election campaign.

As I said in the intro, this lawsuit is a turd. That means it was dropped by a real asshole.