If you walk through Fort Lauderdale-Hollywood International Airport, you'll see emblems for the Orange Bowl and BCS Championship placed carefully along walkways, escalators and glass doors. Don't be fooled, though: the Orange Bowl logos are merely a formality. Nobody really felt that great about it.

Monday's game between Notre Dame and Alabama, however, is the real crown jewel, a clash of name brand programs in what's sure to be a cash cow of a game. They'd beam the BCS National Championship logo into the night sky if they could.

Welcome to South Florida, the home of the 2013 national title game. Suffice to say, this area hasn't been this excited for a college football game since, well, the last time Northern Illinois wasn't involved. It's all gravy when you consider the wealth of storylines that are certain to bubble up from an epic showdown of traditional powers.

Also, they have an ocean and warm weather here, which helps. Fear not, the Solid Verbal is working hard so you don't have to.

Today, we've set up a mobile studio at a vacant coffee table on an upper level of the official media hotel, across from the media lounge. 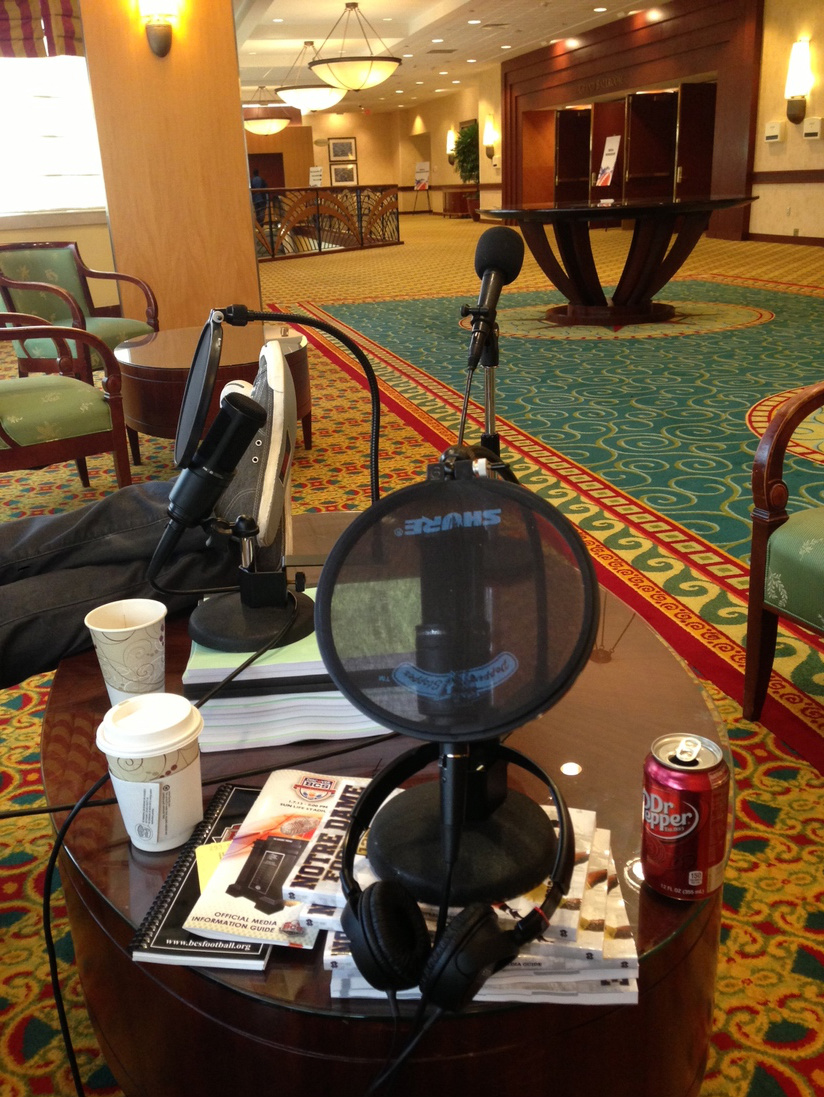 This is equivalent to waiting outside a bathroom to meet potential dates, only more productive and slightly less embarrassing. Downstairs, SiriusXM has set up an entire command center, complete with backdrops and a screen-printed table cloth; we've got a mixing board that we can barely operate and a few stacks of media guides to prop up our microphones. Also, the roof is leaking, and we've found the only cold corner in a tropical climate.

Thus far, we've gotten a few dirty looks, but at least our clothes match. This is not only a championship for college football, but also for an eclectic variety of mismatched shirts, shorts and shoes that cannot be reassembled anywhere else on the planet. It's quite the cavalry, and with rumors of a near-scuffle yesterday -- presumably over a danish -- watching the media cover the BCS Championship might be the only angle worth following.

But, the truth is that it's not easy to be original in an environment this saturated. There are no new angles or hidden matchups that have gone unexamined. There are no secret weapons. There are just interesting hypotheticals and what-if scenarios. Fans at home realize as much, and those covering the action are no different. It takes skill to come up with something new, and if a bad outfit is the extent to which creativity can be exercised, then so be it.

Over the coming days, the action will intensify as the media presence triples and the teams actually take the field. In the meantime, we'll be here trying to keep warm.