Washington's measuring stick: How close are the Huskies to Oregon this time?

Washington proved about as much as it could while losing to Stanford last weekend. Now the Huskies get an even bigger test, welcoming Oregon to town. Are the Huskies ready to survive 60 minutes against the Ducks with the dam intact?

Share All sharing options for: Washington's measuring stick: How close are the Huskies to Oregon this time?

Rarely does a team prove itself so thoroughly in a loss. Last Saturday in Palo Alto, Washington outgained Stanford by 210 yards (489-279), scored 28 points after a rough start, and put itself in position to take out a top-5 team on the road before some bad late breaks. Granted, the primary post-game story lines centered around iffy replays and fake injuries, but the lasting story could simply be this: Washington looks really, really good.

The Huskies rank 11th in the F/+ rankings and 16th in the AP poll, and it seems legitimate. Like so many other one-time heavyweights (hello, Colorado), we've jumped to "They're back!!" conclusions a little too quickly through the years, but head coach Steve Sarkisian has built an immensely talented and athletic squad, and after growing pains in 2012, the team is coming together nicely in 2013.

Now we get to find out if any of that matters against Oregon.

Playing Oregon is a 60-minute experience. It isn't so much about making stops as building a dam. You not only have to hold up, but you have to do so without springing anything more than the smallest of leaks. One solid crack, and things get away from you in a heartbeat; with one touchdown-turnover-touchdown combination, a seven-point deficit becomes 21 points in about 35 seconds.

Over the last three and a half seasons, Oregon has lost exactly four times, twice at home and twice at neutral sites. The four teams that beat them ranked third (2010 Auburn), second (2011 LSU), 12th (2011 USC), and 11th (2012 Stanford) in the year-end F/+ rankings. To survive the onslaught of pace and yards, you must not only have a good game plan and strong discipline; you must also be able to match the Ducks' strength and athleticism with your own. Only elite teams can do that, it appears, and teams of a lesser standard rarely even come close. 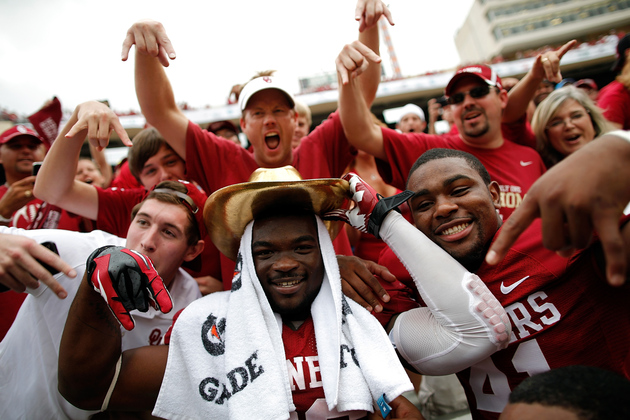 It wasn't until last year's trip to Eugene that Stanford proved it had the athletes to hang with the Pac-12's standard-bearer without falling victim to the country's deadliest one-two punches. Is Washington ready to announce the same?

When Steve Sarkisian took over in Seattle in 2009, USC was handing over the reins. The Trojans' long run of success -- seven consecutive seasons with 11 or more wins (pre-vacation) -- was about to come to an end, Pete Carroll was about to leave for the Seattle Seahawks, and Lane Kiffin was about to replace him. Meanwhile, Chip Kelly was moving into the big office in Eugene. Kelly spent 2007-08 as Mike Bellotti's offensive coordinator at Oregon, and his head coaching tenure began at the same time as Sarkisian's.

Needless to say, Kelly didn't have quite as much rebuilding to do. Oregon spent much of 2007 looking like a national title contender before an injury to Heisman favorite Dennis Dixon, and the Ducks finished with a lost as many wins in 2009 (10) as Washington finished with losses (12). Kelly's reign began with the most famous Falcon punch in college football history, but after Oregon lost to Boise State to start 2009, the Ducks would win 46 of their next 52 games before Kelly left for the Philadelphia Eagles.

Though Sarkisian has dealt with plenty of his own story lines through four-plus seasons -- the immediate turnaround, the staff changes, the whole "getting stuck on seven wins" thing -- the Oregon game has basically served as a pretty accurate status check each season. It will continue to be that way with Mark Helfrich now in charge of the Ducks.

Oregon has won the last four meeting by an average score of 46-18, but with Oregon, there are a few different ways to lose by 28 points. Aside from 2012, Washington has chosen the more encouraging path. Still, the Huskies have fallen victim to combinations of punches. Less-than-elite teams always do. 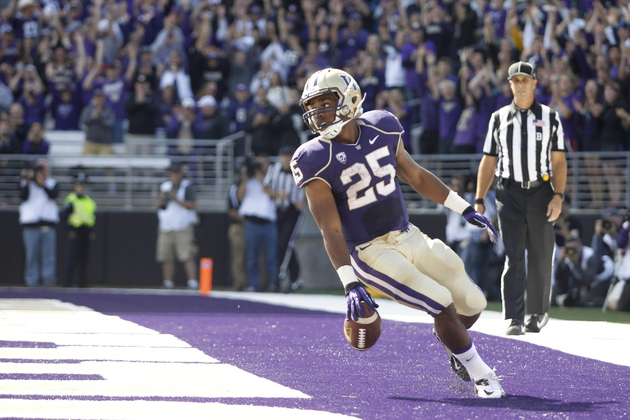 Oregon is obviously a rather proven entity at this point, but it would be insulting if we simply painted this matchup in a "Can Washington keep up?" shade. It's also worth asking whether Oregon can account for Washington's strengths.

Tempo. Washington has found success this season through, among other things, pace. The Huskies are snapping the ball every 20 seconds and averaging a robust 85.0 plays per game. It's hard to prevent Oregon from ripping off 80-100 plays if you're doing the same, but the Huskies have taken a completely different approach to tempo this year after averaging just 65.6, 65.9, 66.0, and 69.5 plays per game, respectively, from 2009-12. Can't beat 'em? Join 'em.

Bailouts. Though the Huskies move quickly, they have been only good on offense in 2013, not spectacular. The big plays are sporadic, leaving a mostly efficient offense to grind away, five or six yards at a time. Done over 85 plays, this can wear you out; the Huskies are more than happy to give you a repeated dose of Bishop Sankey (26 carries and 146 yards per game) and quick, easy passes to Jaydon Mickens, Kevin Smith, and Austin Seferian-Jenkins (on standard downs: 50 targets, 40 catches, 368 yards).

Without big plays, however, you are forced to either grind without mistakes or bail yourself out when you fall behind schedule. Because you'll eventually make a mistake and fall behind schedule. Washington has gotten away with a lot of the latter. The Huskies rank just 87th in Standard Downs S&P (unadjusted for opponent) but are third in the country on passing downs. For the season, they have run frequently on such downs, but against Stanford there was little pretense. Not including a fake punt run by Travis Coons, the Huskies attempted just five rushes and 22 passes on passing downs, and they got away with it for most of the evening. Keith Price got sacked three times, but he also completed 12 of 19 passes for 163 yards. And not including throwaways, he was 9-for-15 for 196 yards on passes thrown 10 yards or further downfield (4-for-6 for 88 to Kevin Smith).

Washington's offense has been pretty solid without a lot of downfield passing success. If Price is able to start finding Smith and Kasen Williams deeper downfield, then the Sankey run game and checkdowns will begin to work even better than they already have. Oregon's defense has been lights-out against the run (fifth in Rushing S&P, fifth in overall Success Rate), but the Ducks have suffered a few passing downs glitches here and there. If they let Washington off the hook on such downs, they could find themselves in an odd situation: worrying about their own defense getting worn down by an opponent's high-tempo attack.

Pass defense. Heading into last Saturday's game, Stanford's Kevin Hogan was averaging 9.0 yards per pass attempt, including sacks. Against Washington, he averaged 4.5, taking two sacks and completing 12 of 20 passes for just 105 yards. This is par for the course against Washington; the Huskies rank third in Passing S&P and fifth in Passing Downs S&P. If you fall behind schedule, Washington finishes off the drive. Ends Hau'oli Kikaha and Josh Shirley get after the passer, and an athletic, experienced secondary prevents most downfield passing opportunities.

If you take out his rain-addled 11-for-25 performance versus California, Oregon's Marcus Mariota is completing 60 percent of his passes at 19.1 yards per completion. Mariota's arm strength is outstanding on the intermediate passes, and Oregon has utilized it quite a bit in 2013; against Tennessee and Colorado, Mariota was 39-for-60 for 811 yards, nine touchdowns and no picks, and he was without De'Anthony Thomas (questionable for Saturday) against the Buffaloes. When Oregon passes the ball, it will be something of an "irresistible force versus immovable object" matchup, but if those passes are coming on second- or third-and-long, Washington could have the advantage.

Washington has held up well into the second half of three of the last four meetings with Oregon. That's an encouraging sign for a Huskies team that is much, much better now than it has been at any point in those four years. The Huskies have undoubtedly closed the gap, and the F/+ projections suggest they might be able to do so for four full quarters this time around. But we know how this works; 55 minutes won't cut it against the Ducks. On offense, Washington can soften you up near the line of scrimmage and, evidently, beat you downfield as well. On defense, the Huskies can turn a one-dimensional passing team into a no-dimensional offense.

Oregon still holds the edge here because the Ducks can still run the ball as well as ever. But if they are dealing with quite a few second-and-8s instead of second-and-5s, the edge could quickly turn in Washington's favor. Assume Oregon wins, but understand that Washington has a very good shot.