The Tigers firmly planted themselves in the SEC and BCS chase, but they'll have to go the rest of the way without standout quarterback James Franklin. Plus our projected BCS Top 25 after Week 7's action.

After six weeks of relatively upset-free football, and no major shocks so far, the 2013 college football season was put on its ear in Week 7. A few teams -- Stanford, Oklahoma, Michigan -- were stunned and knocked from the league of unbeatens by unranked teams, but Missouri, perhaps the most under-the-radar zero-loss team entering Saturday, picked up a huge win at Georgia to take control of the SEC East race and move to 6-0. 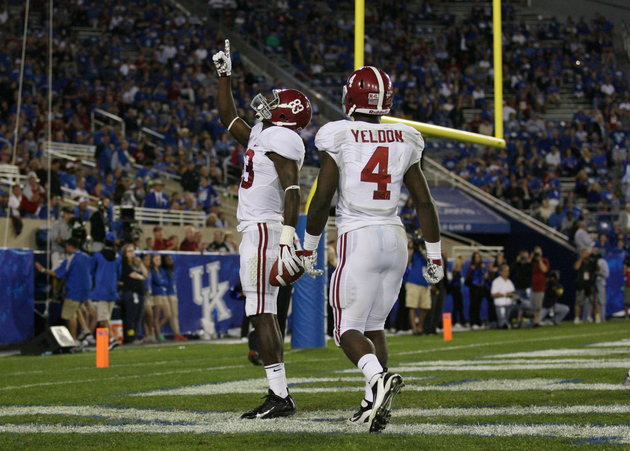 After a messy weekend filled with surprises, there will be plenty of movement in the polls. We're still a week away from the season's first official BCS standings, but if they were released today, they'd look something like this.

We're assembling these before the polls and computer rankings are out, based on last week's numbers, precedent from previous years, and our best educated guesses.

After beating the likes of Murray State, Toledo, Indiana, Arkansas State and Vanderbilt through its first five games, Missouri finally picked up a statement win that could propel the team toward a possible SEC Championship Game and BCS bowl appearance.

Missouri entered Saturday as a projected No. 20 in last week's BCS standings -- per Jerry Palm, Samuel Chi, and others -- and after the win in Athens, the Tigers would probably move up to 16 if the standings were released today, passing three teams that lost Saturday -- Michigan, Florida, Washington -- and getting a voter boost to jump Texas Tech (the computers already like the Tigers better than the Red Raiders).

How high can a team like this, which has gone mostly unnoticed after a relatively weak non-conference schedule, climb in the standings if it runs the table? Well, for a team like Missouri, which has the fortune of playing in the SEC, perceived as the nation's best conference, the sky is the limit. Should the Tigers leave Atlanta in December with a 14-0 record and an SEC title, they'd be packing for a trip to Pasadena and the BCS Championship Game.

This is likely all a moot point, since Missouri quarterback James Franklin will miss the rest of the regular season with a separated shoulder. Franklin went into Saturday ranked fourth in the SEC with 281.4 passing yards per game and a 13:3 touchdown:interception ratio. On top of that, he was averaging 55.6 yards per game on the ground. Freshman backup Maty Mauck had thrown just three passes before Saturday, and after coming on in the fourth quarter for Franklin, he was asked to throw only three more times. Franklin missed three games last season due to injury, and the Tigers were 1-2 in those contests.

But dare to dream, Tigers fans, because it feels good to dream.

Even if competing with other undefeated teams like Oregon, Clemson/Florida State, and Ohio State, they would get into the top two based on their run through conference play. A perfect Missouri team would have wins over Georgia, South Carolina, Florida, Texas A&M and likely either Alabama or LSU. The Tigers might not jump past Oregon all the way to No. 1, but they would get a title shot.

Missouri is set up for a run toward a special season, but with the Tigers' offensive leader sidelined, it's hard to imagine them making it through the remainder of the SEC gauntlet unscathed. 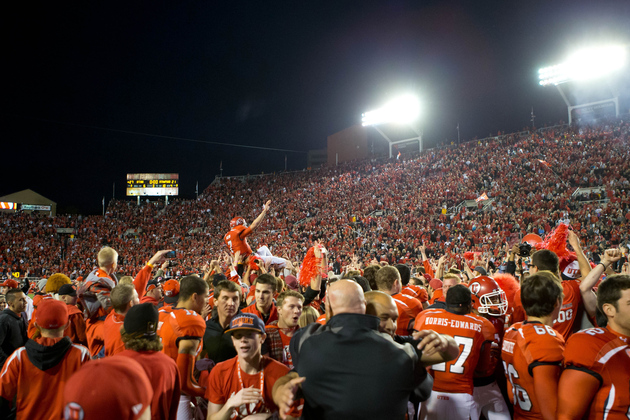 After falling on the road to an unranked Utah, we have Stanford tumbling to No. 10 in this week's projected standings. How'd we come up with that number? The same as everybody else: a combination of Saturday's results and historical precedent. Let's show a little bit of our work.

The Cardinal aren't likely to drop below Georgia or Oklahoma, two other Saturday losers, and No. 10 should be their floor right now. The computers aren't huge fans of Baylor, and the voters will likely recognize Stanford for the talented team it is and avoid dishing out too much punishment to David Shaw's club.

In 2011, an 8-0 Boise State team lost at home to TCU in Week 10. The Broncos, who had been ranked fifth in the BCS entering the game, dropped to No. 10. That same week, No. 4 and undefeated Stanford lost at home to No. 7 Oregon, dropping to No. 9. In Week 11, Oregon and Oklahoma were both one-loss teams ranked fourth and fifth, respectively. Oklahoma lost at No. 22 Baylor and dropped to No. 9, and Oregon lost at home against USC and dropped to No. 10. In Week 13, No. 4 Virginia Tech, another one-loss team, dropped the ACC Championship Game to No. 20 Clemson and fell to No. 11 in the final standings.

So it seems that a team ranked in the No. 4-to-6 neighborhood falling to a respectable opponent usually drops to somewhere between No. 9 and No. 11. That should be the case for this Stanford team, which was only .002 BCS points shy of No. 2 last week. 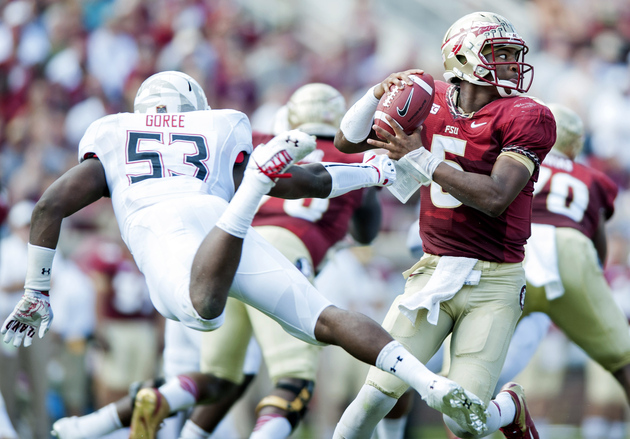 Here's your game of the year in the ACC, and really, maybe the game of the year nationally. The winner will be heavy favorites in each of its remaining conference games and have the inside track to a perfect season and ACC title. The loser will be all but eliminated from the Atlantic Division race and national title hunt. Both teams have high-octane offenses and opportunistic defenses, and the matchup will likely come down to who wins the duel between senior Tajh Boyd and first-year starter Jameis Winston.

Stanford lost, but as Alabama has proven over the last two years, that doesn't mean the Cardinal are out of the national title hunt. However, they need to get through the rest of their schedule unbeaten, and that starts with a home date against 5-0 UCLA. The Bruins will need help to get (back) to Pasadena at the end of the year, but knocking off Stanford on the road would make them contenders.

All of a sudden, this is a game for Missouri to boost its BCS profile. Who would have thought that at the beginning of the season? Or even a couple of weeks ago? Franklin is out, which certainly won't help Mizzou's chances against the Gators' stout defense. But if Gary Pinkel's D can slow down the Florida offensive attack, which hasn't been too difficult for most teams this season, Missouri should have a decent chance to get to 7-0 going into another big tilt against South Carolina. Losing Franklin is a major blow, but the Tigers have to buck up and get on with it.