At the midpoint of the 2013 college football regular season, let's talk about some of the season's biggest surprises to date, from Texas A&M's defense to Notre Dame to Oklahoma State's offensive line to Virginia Tech's pass defense.

Total passing yards for Oregon State's Sean Mannion through six games. The junior from Pleasanton, Cal., is completing two-thirds of his passes, has thrown just three interceptions to 25 touchdowns, and, yes, is averaging 419 passing yards per game for the undefeated (*cough* against FBS teams) Beavers. In a 52-24 win over Washington State on Saturday night, Mannion completed 34 of 51 passes for 493 yards and four scores, with one pick and one sack. And that was really only an above-average game for him.

We knew Mannion would have Brandin Cooks to throw to, and we've long known that offensive coordinator Danny Langsdorf is willing to get the ball to his playmakers in a variety of ways. What we didn't know was that "a variety of ways" in 2013 basically means "have Mannion throw to them." He's completed an absurd 63 of 81 passes to 944 yards to Cooks (78 percent catch rate, 11.7 yards per target), but he's also 30-for-47 for 521 to Richard Mullaney, and he's completed at least 13 passes to five other targets as well.

Projected over 13 games, Mannion is on pace for 5,440 and 54 touchdowns. The Pac-12 is ridiculously good at offense this year -- of 30 quarterbacks with at least 12 touchdown passes, eight reside in the Pac-12, and the best running back in the country (Bishop Sankey) might, too -- but Mannion is leading the way.

We knew the Aggies might struggle defensively this year after losing tackles Spencer Nealy and Jonathan Mathis and linebackers Damontre Moore, Sean Porter, and Jonathan Stewart. That's a big reset in the front seven.

Still, they are allowing 6.5 yards per play and 474 yards per game. When you average 587 yards yourself, this isn't the end of the world. But A&M was barely able to get past an only decent Ole Miss team, and late-season road trips against teams who can play well on both sides of the ball (LSU and the version of Missouri with James Franklin) loom. Having the best player in college football -- and it's safe to say that Johnny Manziel is indeed the best -- will win you a lot of games, especially when that guy is a quarterback. But you have to defend a little. Just a little.

Average plays per game for Michigan State in its first two conference games, both wins. The Spartans aren't exactly lighting up the world offensively, but they did score 70 points combined against Iowa and Indiana, and with one of the two best defenses in the country, they don't need much more than that.

There seems to be an identity forming for MSU's offense; that's a start. Connor Cook has attempted 76 passes in the last two weeks, and after some comical miscues early in the year, most of those 76 attempts were something less than negative. He's 47-for-75 for 512 yards, four scores, two interceptions, and one sack. He's averaging just 6.6 yards per pass attempt, which isn't very good, but again, State doesn't need much. The offense is scoring when it has the chance and is keeping the defense fresh. That's enough to make the Spartans the favorite to face Ohio State in the Big Ten title game. And you don't necessarily want to face that defense in a must-win situation.

The American's win percentage in eight games versus FCS competition. The conference won five but lost three -- 53-21 to McNeese State (by USF), 33-18 to Towson (UConn), and 30-29 to Fordham (Temple). It also went just 9-5 versus (fellow?) mid-major conferences and 4-11 against BCS conferences.

I mean ... we knew the AAC wasn't exactly going to light the world afire, even with Louisville playing well. And UCF and (to a lesser extent) Rutgers have tried to hold up their end of the bargain. But I talked myself into Cincinnati potentially being a top-25 squad and USF being a top-40 squad. Instead, Tommy Tuberville's Bearcats have been incredibly disappointing, with a 28-point loss to Illinois and a loss to a USF team that was positively wretched for most of September. UC had a chance to establish itself as the conference powerhouse with Louisville and Rutgers leaving; that hasn't happened. It's your world, UCF. 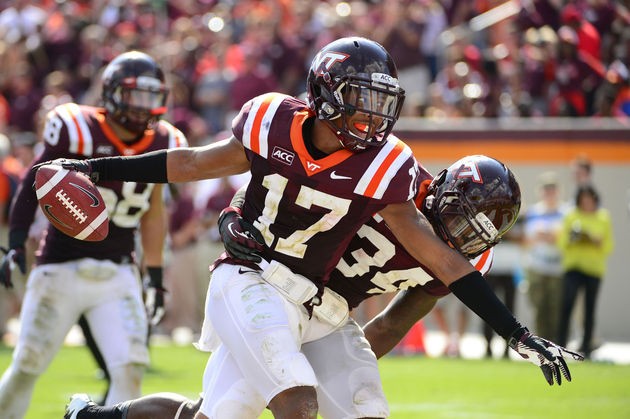 Completion percentage for Virginia Tech opponents this year. The Hokies have allowed the following passing line: 95-for-198 for 1,155 yards, six touchdowns, 13 interceptions, and 27 sacks for 153 yards. Average yards per attempt: 4.5. A whopping 41 of opponents' 103 incomplete passes have been either intercepted or broken up; both Kyle Fuller (20.5 tackles to 12 passes defensed) and Brandon Facyson (15.0 tackles to nine passes defensed) are getting hands on passes almost as often as they bring down ball-carriers, and blue-chip freshman Kendall Fuller (24.0 tackles to seven passes defensed) is more than holding his own. Opponents are struggling to even get a pass off against a quickly improving pass rush, and when they do, they are forced to throw to blanketed receivers.

Saturday's game versus Pitt may have been the Hokies' masterpiece. With one of the better receiving duos in the country (Devin Street and Tyler Boyd), Pitt's Tom Savage completed just 13 of 28 passes for 187 yards, and he was sacked eight times. Per-attempt average: 3.8 yards. Passes to Street were just 5-for-11, and Kyle Fuller broke up three of the six incompletions.

Another impressive pass defense: UCLA's. The Bruins allowed just 187 net passing yards on 47 attempts by California on Saturday night. Poor Jared Goff completed 26 of 43 passes, which could be worse, but they gained just 215 yards, and he was picked off once and sacked four times. UCLA made him look like Virginia Tech's defense has made almost every quarterback look in 2013.

And I talked myself into both teams! Well, I backed off on the Irish when Everett Golson went down, but I went full-in, guns blazing, for the Longhorns. And I was scarred enough by the experience that I couldn't even pull the trigger on an upset pick I was tempted by this weekend.

I tend to rebel against unanimity, and the "OU's going to smoke Texas" narrative is pretty much a 100% consensus...

…but I've already been burned by sticking up for Texas this season. Won't happen again.

Teams currently ranked in the top 30 of both Off. S&P+ and Def. S&P+. Some are not very surprising: Florida State, Oregon, Georgia, Ohio State, South Carolina, Louisville, Alabama, Stanford, Wisconsin, and Washington, for example. But while Baylor and Miami's membership in this club is surprising because their defenses weren't supposed to be very good, Maryland's is surprising because of both sides of the ball.

The 63-0 whipping at the hands of Florida State was the exception here, not the rule. Or, to put it another way, that game appears to say more about the Seminoles than the Terrapins. Maryland ranks 28th in Off. S&P+ and 24th in Def. S&P+; the offense has gotten 54 catches for 966 yards and four touchdowns from Stefon Diggs and Deon Long and 419 rushing yards from Brandon Ross, and without starting quarterback C.J. Brown, it even held withstood a pretty good Virginia defense in gaining 468 yards and eking out a 27-26 win. The Terps' defense, meanwhile, is allowing just 4.9 yards per play for the season despite facing a pretty big rebuild in the offseason; now we'll see if it can get along without star pass rusher and all-name team member Yannick Cudjoe-Virgil. Injuries are once again piling up for Randy Edsall and the Terps, but they're surviving so far. At least, aside from that trip to Tallahassee.

Wilson has quickly become everything you look for in a Dennis Erickson quarterback: explosive, exciting, and all sorts of unstable. But he found his stability just in time to aid in an upset of Stanford on Saturday. Against the great Cardinal defense, he averaged just 6.5 yards per pass attempt, but he threw just one pick and was sacked just once, and his ability to avoid disaster made a hell of a difference when Utah figured out it could run the ball. Utah manned up against Stanford and lived to tell the tale. This might be a truly legit top-20 team ... one of many in the Pac-12.

Missouri skill position players with at least 40 intended touches (carries and targets) through six games. New offensive coordinator Josh Henson has made a point of spreading the field as wide as possible and giving the ball to each of his play-makers a strangely even amount of time.

Obviously we'll have to wait and see what happens when a new hub is in place -- Franklin is out three to five weeks after suffering a shoulder injury in the fourth quarter of a 41-26 win over Georgia -- but this offense makes the quarterback's job pretty easy, and Maty Mauk did engineer a 13-0 finish in Athens. Of course, easy doesn't apply to anything in life when facing the Florida defense. Mizzou will have to get another strong contribution from its defense to move to 7-0.

Yards per carry for Oklahoma State's Jeremy Smith and Desmond Roland this season. I've said multiple times that as long as offensive line coach Joe Wickline is in charge, I will simply assume that OSU has a good line no matter how much turnover it faces. But after an only mediocre performance last season, the line has been downright poor. Heading into the season, Smith had averaged 6.2 yards per carry for his career, and Roland had averaged 6.3. They're not finding any room to run this year, and it's handcuffing new coordinator Mike Yurcich, who hasn't acquitted himself incredibly well either.

The 'Pokes are 4-1 overall and 1-1 in conference, and if the line comes around, this is still a potentially strong Big 12 title contender. But aside from "Wickline's been great in his career," we don't have a lot of reason to think the line will come around.

Years in which Texas Tech started the season 6-0 in the Mike Leach era. Kliff Kingsbury has now done it once in one try.

Leach's tenure with the Red Raiders was incredibly successful in just about every possible way, but truly great seasons were rare. With a backloaded conference schedule (it's like everybody has a backloaded schedule in the Big 12 this year, which isn't actually possible), things could still fall apart a bit, like it did last year under Tommy Tuberville, when a 6-1 start begat a 2-4 finish. But Tech ranks in the top 30 of both Off. S&P+ and Def. S&P+ and has already overcome a bit of adversity with injury issues at quarterback. The schedule hasn't exactly been difficult, but for the most part, the Red Raiders have taken care of business against said mediocre schedule and looked the part of a top 30 team.

Combined conference win percentage for Rice (3-0), Tulane (3-0), and Marshall (2-0) so far in Conference USA play. Rice and Marshall were certainly considered conference favorites to some degree, but ... Tulane? At 5-2 overall, the Green Wave are one win from bowl eligibility. They've topped five wins just once since the 1998 undefeated season. This isn't a particularly good team by any means, but it's still a much better one than has resided in the Saturday Superdome for a while, and there is legitimate talent on both the defensive line and in the secondary.

Tulane is suddenly threatening to become the class of the 2013 Louisiana mid-majors. After Louisiana Tech, UL-Monroe and UL-Lafayette went a combined 26-12 last season -- 3-5 versus BCS conference opponents, with an average score of Opponent 40.3, Louisiana School 37.6 -- the Bulldogs, Warhawks, and Ragin' Cajuns are just a combined 8-10 so far, 1-6 versus BCS teams (scoring margin: minus-23.6). The Cajuns are improving and beginning to look like the Sun Belt favorite I thought they were, but while I saw Louisiana Tech's downfall coming, ULM's struggles have surprised me a bit. Fly that flag, Tulane.