Florida State holds most of the statistical advantages against Clemson, even when you account for strength of schedule. But Clemson's aggressive defense could make life hell in the pocket for FSU quarterback Jameis Winston. At least, it better. Otherwise, the Tigers aren't surviving their elimination game.

Share All sharing options for: The Florida State-Clemson elimination game: Rattling Jameis Winston is the key

It's become something of a habit through the years: Get to mid-October with a lot of undefeated teams, then dream of the ultimate BCS Armageddon scenarios. Since we've all contracted Senioritis with a playoff right around the corner, however, we're missing out on some quality reveling as one of the better Armageddon scenarios plays out in the BCS' final season. 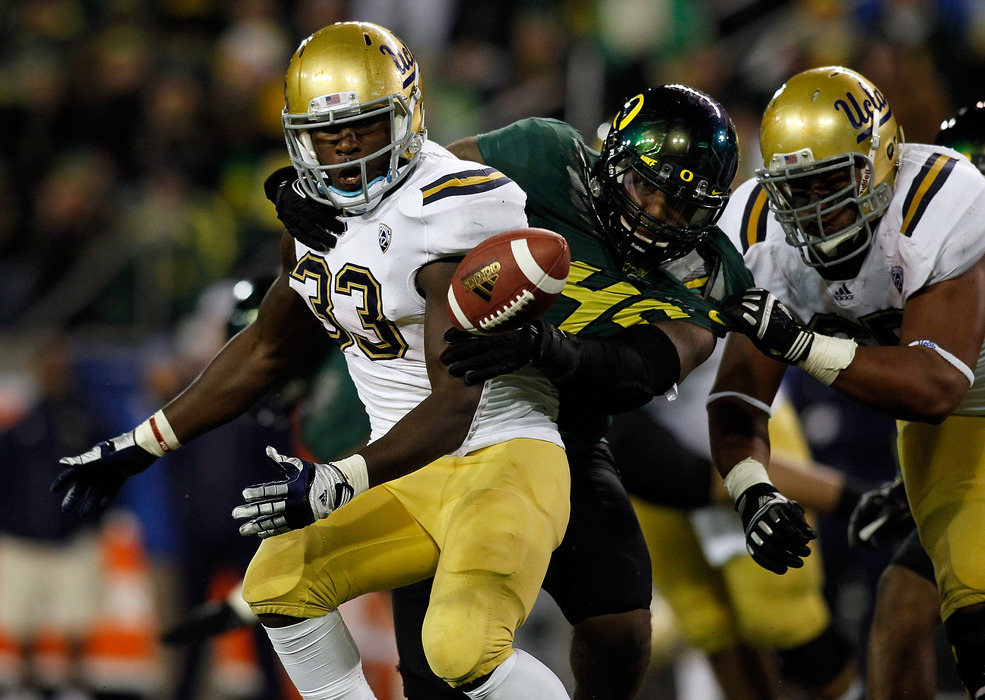 To be sure, November will give us upsets and tamp down this list of 13 pretty significantly; it's what November does. But the odds of finishing with a few undefeated teams are better this year than in years past. There is a semi-navigable path for teams to finish undefeated in every major conference and two mid-majors. Ohio State (Big Ten) and Louisville (AAC) barely play anybody with a pulse the rest of the way. Alabama's (SEC) toughest remaining regular season game (LSU) is at home. Oregon (Pac-12) just manhandled Washington, and its trip to Stanford looks at least one percent easier now than it did last week. Baylor (Big 12) has, to date, looked far and away like the class of its conference.

We don't know what upsets and chaos await in November, but we know this: Saturday's FSU-Clemson game is enormous. So who has the edge? 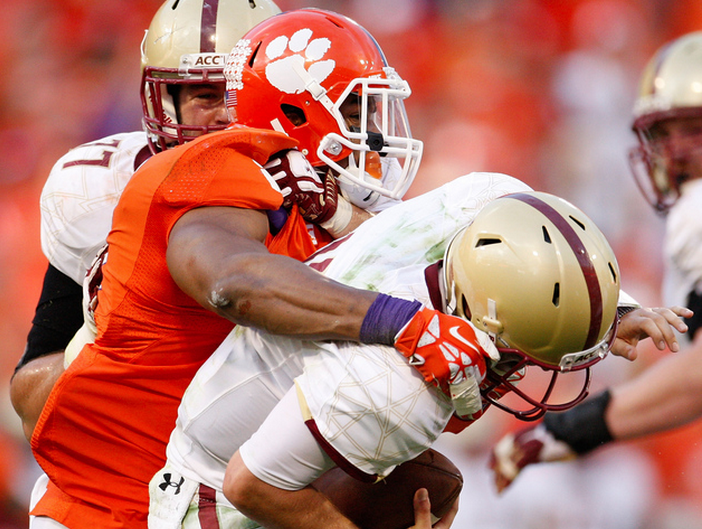 Passing downs. Clemson's offense hasn't been amazing on passing downs, but neither has FSU's defense. The Seminoles' pass rush has struggled at times, which makes sense considering the talent they had to replace this offseason. Only one FSU defender has more than one sack (Lamarcus Joyner), and the 'Noles have only a paltry 10 overall.

If Tajh Boyd has time, Sammy Watkins is probably eventually going to get open. He has been targeted 21 times on passing downs (non-garbage time), and he has caught 14 passes for 290 yards. But if he's forced to look for another option, things fall apart pretty quickly. Not including running back Roderick McDowell (6-for-8 for 50 yards), the next two options on passing downs are receiver Martavis Bryant and tight end Sam Cooper, who have combined to catch just five of 16 passes for 55 yards on such downs.

Clemson might hold a slight advantage here, but it's predicated on Watkins getting open.

Clemson gets into your backfield. The Tigers have a pretty incredible 61 tackles for loss through six games; they are the only team in the country averaging more than 10 per game, and they're the only team averaging at least four sacks per game as well. Brent Venables' defense tries to mask deficiencies with aggressiveness and speed, and it works quite often. This could be a problem for FSU, as you can get into the backfield a bit on FSU.

The Seminoles rank 111th in Passing Downs Sack Rate, allowing Jameis Winston to get sacked on 12 percent of all passing downs. Considering how hard he is to bring down, that's impressive, and not in a good way. If FSU falls behind schedule, with either negative runs or small gains, Clemson is going to bring the house, and it could work. The Tigers passing downs sack rate thus far: 19.8 percent, easily No. 1 in the country.

Proof. We're getting into intangibles here, but while I can use stats to tell you that Florida State might honestly be the best team in the country (and Clemson probably isn't), the Seminoles haven't played anybody very interesting (Previous Strength of Schedule rank: 120th), and unless you count Pitt on the opening Monday night of the season (and you probably shouldn't), Winston has yet to play in a truly big game. Clemson, meanwhile, survived a huge battle with a mostly healthy Georgia team in Week 1. The Tigers have not been incredibly impressive since then, but in terms of proof, Clemson has it. So far.

Death Valley. A good home field advantage is typically worth three or four points. In a battle of two top-10 teams (and whether you are looking at polls or advanced rankings, these teams are both top-10 caliber), that can make the difference. 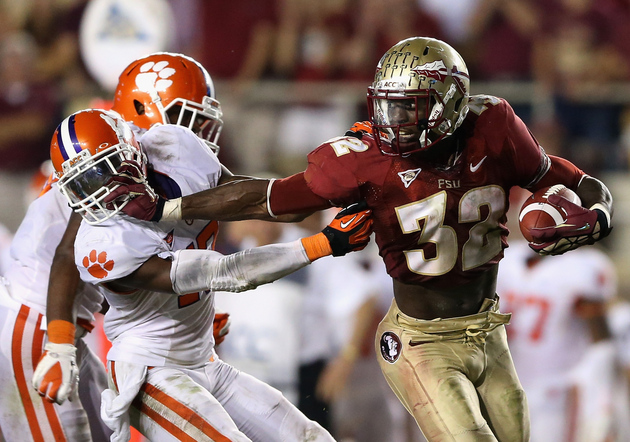 Clemson can't stop the run. You know what negates a strong pass rush? A seven-yard gain on first down. Clemson ranks 80th in Rushing S&P+ so far this year, which is something, considering the Tigers really do make a lot of big plays on defense. But when they're not making one, they're allowing one.

This is communicated when looking at this: Clemson's rushing success rate on defense is an extremely healthy 32.6 percent (national average: 43 percent). But their PPP average, which measures explosive plays given up? It's 0.50, worse than the national average of 0.45. If you get four yards, you get 12 yards. And while Clemson can sometimes go for most of a game without breaking down, it sometimes cannot. Tailbacks for BC, Wake Forest, and NC State combined to average just 3.7 yards per carry, but backs from Georgia and Syracuse averaged 7.9.

In terms of overall quality, let's just say Florida State is much closer to Georgia (the version of Georgia with Todd Gurley and Keith Marshall, that is) than NC State. Devonta Freeman is averaging 7.1 yards per carry, and backups James Wilder, Jr., Karlos Williams, and Ryan Green are averaging 6.8. A line that cannot protect Winston very well (granted, with minimal help from Winston, who holds onto the ball too long sometimes) certainly opens up holes for the run.

If you don't get to Jameis Winston, he's completing the pass. Florida State is a little too high-variance on passing downs. Winston takes far too many sacks on second- and third-and-long, and Clemson will be more than happy to oblige in that regard. But FSU still ranks 12th overall on passing downs because when Winston doesn't get sacks, big things happen in the other direction. His top four targets on passing downs (non-garbage time) -- Kelvin Benjamin (9 targets), Rashad Greene (9), Kenny Shaw (6), and Nick O'Leary (5) -- have combined to catch 18 of 29 passes for 372 yards.

Clemson's secondary is just about as aggressive as its front seven. Of the 74 incomplete passes opponents have thrown against Clemson, 38 were defensed (either intercepted or broken up). Some of that comes from Vic Beasley, an incredibly active end who has batted down five passes and logged 12 tackles for loss; but most comes from the secondary. Bashaud Breeland has defensed seven passes from the cornerback position, corners Darius Robinson and Garry Peters have combined for seven, and six other DBs have at least one.

Though he had to deal with losing No. 1 receiver Malcolm Mitchell early in the game, Georgia quarterback Aaron Murray did complete 20 of 29 passes for 323 yards against CU in the opener. What saved Clemson is exactly what could save the Tigers on Saturday: picks and sacks. They baited Murray into a second-quarter pick as the Bulldogs were driving, and they sacked him four times.

You can't pass on Florida State. Clemson happily takes a lot of risks on defense because it knows the offense will probably pick up the slack if the D allows a big play. That's less of a certainty against FSU.

In the first quarter or so of the Boston College game, FSU fell behind by a 17-3 margin, thanks mostly to the running of BC's Andre Williams. But BC's Chase Rettig also completed five of five passes for 54 yards in those three scoring drives. In the seven quarters that followed, against BC and Maryland, opposing QBs combined to complete just 28 of 54 passes for 344 yards with two picks, four sacks, and a per-attempt average (including sacks) of 5.4 yards.

Now, if BC and Maryland can average 5.4, Tajh Boyd and Clemson can average 6.5 or better. But how much better? And can an only average Clemson run game pick up the slack if CU is indeed falling behind schedule frequently with the pass?

Sometimes one matchup advantage is enough. If your pass rush is humming, it can carry you through 60 minutes. For proof, just look at SMU's bowl win over Fresno State last season or, more classically, Purdue's famous Alamo Bowl win over Kansas State in 1998. If your pocket is never clean, if your quarterback (a young one, in FSU's case) is constantly getting harassed and is struggling to get through his reads, an offense can grind to a complete and total halt.

Still, it's probably telling that I moved toward intangibles pretty quickly when listing Clemson advantages. I freely acknowledge that abstract concepts like "proof" and "heart" and "toughness" play a role. It's just that we usually don't figure out what kind of role such things played until we're crafting the post-game narrative. While home field could indeed matter, and while Clemson's battle-tested roster could indeed be an asset, it's hard to bank on that. If Clemson's defense isn't consistently making plays in FSU's backfield, it's difficult to find another advantage the Tigers hold.

The bottom line is that Florida State's performance in 2013 has been more impressive, top to bottom, than Clemson's. Clemson has the only big win, but what the Seminoles have done to lesser teams has damn near reached cruel-and-unusual territory. Maryland isn't amazing, but you're not supposed to beat the Terps by 63 points. Pittsburgh just lost at Virginia Tech by 10 but lost at home to FSU by 28. Clemson can take heart in the fact that it outgained BC by far more than FSU did, but the transitive property isn't known for holding up under scrutiny.

FSU holds most of the advantages, but if Clemson can get into Jameis Winston's head and get him moving faster than he wants to move, the Tigers could pull this one off. And if Clemson survives its elimination game on Saturday night, it will take an upset to prevent the Tigers from heading into Thanksgiving weekend undefeated.