Is Florida State-Clemson the biggest ACC game ever? Here are the top 10 others

Could Saturday's showdown between the Seminoles and the Tigers top the best conference games in ACC history?

Share All sharing options for: Is Florida State-Clemson the biggest ACC game ever? Here are the top 10 others

Saturday night, No. 3 Clemson hosts No. 5 Florida State in a matchup that has implications for both the ACC and national title races. This will be just the fourth ACC contest between two top-five schools, but there have been plenty of historic matchups in the conference.

The conference hasn't always been relevant -- you can thank Danny Ford and Bobby Bowden for the ACC's arrival -- but has given us some dramatic and high-profile games over the past 30 years.

Let's run down the 10 biggest, with preference given to those that lived up to their hype.

The first-ever meeting between top-five ACC teams was billed at the time as the biggest game in conference history, which is enough to get it on the list. But the Seminoles rolled thanks to seven combined sacks from Andre Wadsworth and Greg Spires. Two true freshmen also starred for the 'Noles in the game -- kicker Sebastian Janikowski, who had three field goals, and running back Travis Minor, who ran for 128 yards.

The Hurricanes' defense dominated this game, forcing Marcus Vick to commit six turnovers and essentially ending the Hokies' title chances -- or so it seemed (more on that shortly). Miami scored a defensive touchdown and saw two field goals from Jon Peattie and touchdowns from Kyle Wright and Charlie Jones on the way to the big win. They would lose two weeks later to Georgia Tech, and coupled with a season-opening loss to Florida State, that would knock them out of the title hunt.

A prequel to this year's showdown, the E.J. Manuel-led Seminoles recovered from a two-touchdown third quarter deficit to send the Tigers out of Tallahassee. Manuel threw for 380 yards and two touchdowns, running for 102 more, while Chris Thompson ran for 103 yards and two scores. Tajh Boyd struggled, averaging 6.6 yards per attempt and throwing one touchdown against one interception, and will look to build on that this year at home (and will certainly look to find Sammy Watkins for more than 24 yards).

Clemson's only national title came more than 30 years ago, when the Tigers beat three top-10 teams (including Herschel Walker's Georgia). This was the first time two ACC teams ranked in the top 10 faced off, and the Tigers were looking for revenge -- the Tar Heels had beaten Clemson the year before en route to an ACC title. The Tigers were helped by the absence of star North Carolina running back Kelvin Bryant and were able to score the only touchdown of the game, holding out for the big victory.

The first-ever ACC title game, it was a preview of what was to come -- two teams that seemed like a mismatch (at least according to the polls) giving a close game, with the lower-ranked team coming out on top. The quarterback showdown ended with freshman Drew Weatherford coming out on top against Marcus Vick. The Seminoles actually led 27-3 heading into the fourth, but Vick threw for a touchdown and ran for two more before the comeback fell short with 1:44 left. 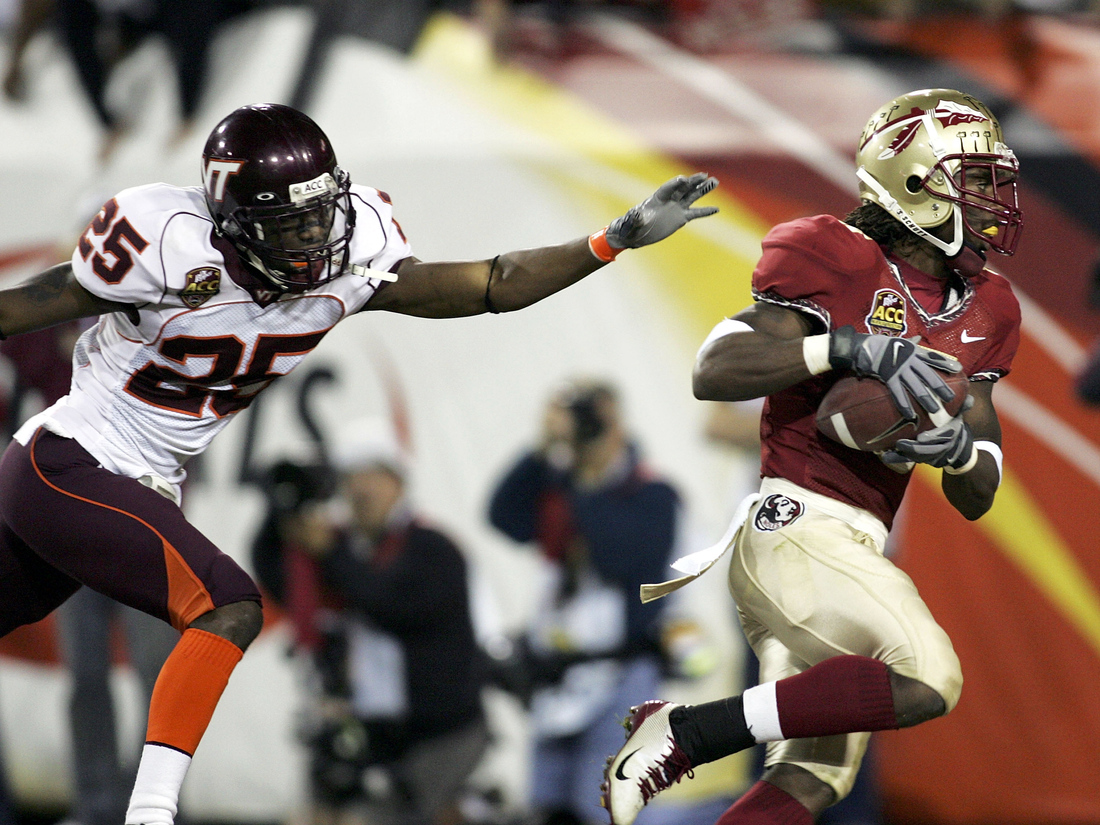 Joe Hamilton nearly won the game for Georgia Tech, completing 22 of 25 passes for 387 yards, but the Peter Warrick-led Seminoles were able to grab the victory on their way to one of two national titles in the decade. Minor recovered a Yellow Jacket onside kick attempt after Hamilton threw for his fourth touchdown of the day, ending the Georgia Tech comeback effort late in the fourth quarter.

One of the best season-openers in recent memory, this was also Miami's first game in the ACC, held eight months after Wide Right IV in the Orange Bowl. Frank Gore won the hurricane-postponed game with a touchdown run in overtime, and the Hurricanes looked well on their way to win the conference in their inaugural season (with Florida State as the most likely challenger). Instead, Virginia Tech came home with the ACC title after Miami lost to UNC and Clemson teams that would combine to finish 12-11, because that's how the conference rolls.

It was thought of as Matt Ryan's Heisman moment -- that is, until the Eagles lost their next two games to Florida State and Maryland. Down 10 points with two minutes to play, Ryan threw for two touchdown passes -- including a 24-yarder to Andre Callender with 11 seconds left after an onside kick recovery -- to win the game for the Eagles.

Yes, children, there was once a time that Virginia was the top-ranked team in the country. The Yellow Jackets won this game on a 37-yard field goal by Scott Sisson with seven seconds left, and ended up being voted the national champions by the Coaches' Poll that year. The Yellow Jackets were trailing by two touchdowns at halftime, but were able to take advantage of multiple Cavalier mistakes to win the game. Virginia, for their part, never recovered, losing four of five to finish 8-4. Our own Bill Connelly wrote about the game two years ago.

Florida State joined the ACC in 1992, and immediately started dominating, winning 29 conference games in a row. This was their first-ever loss in the ACC, and it came on the legs of Tiki Barber, who ran 31 times for 193 yards. A last-second goal-line stand by the Cavaliers left Warrick Dunn inches short of the end zone and sent the Virginia faithful scrambling on to the field (after mistakenly storming on to it the play before) with a huge win.

What do you think? Let us know in the comments.