The Jadeveon Clowney question will be answered in Tennessee rematch

Saturday, Part II of Jadeveon Clowney vs. Antonio Richardson (and the rest of the Vols' very good offensive line) will likely give the potential No. 1 NFL Draft pick the biggest challenge of his final season.

Share All sharing options for: The Jadeveon Clowney question will be answered in Tennessee rematch

KNOXVILLE, Tenn. - Beginning in 2014, NFL general managers will have to contend with Jadeveon Clowney for roughly a decade. And if that seems to have lost some of its ominousness after an offseason of unfathomable hype gave way to a half-season of injury woes and nebulous debates about Clowney's effort and passion, Saturday's South Carolina-Tennessee game will offer a true, inarguable metric in the eyes of both critics and scouts.

Not sure how good Clowney really is right now? The best way to find out is to go get you a "Tiny" Richardson.

He's the same offensive tackle who let Clowney slip past him on a quarterback sack that became a game-losing fumble in the final minute of South Carolina's 38-35 win over Tennessee in 2012, but the Volunteers' Antonio "Tiny" Richardson is himself a potential first-round NFL talent and arguably the best tackle Clowney has faced in his career.

Clowney's thin stat sheet in the five games he's played in (two sacks, 13 tackles) has produced a variety of negative opinions in the national media despite consistent endorsements from NFL scouts and executives. But defensive linemen aren't always about constant statistical output. His game last year against Tennessee was a success because of one big play.

Not surprisingly, new Volunteers head coach Butch Jones wants no part of an examination that isolates a single player while his 3-3 Tennessee team prepares for the No. 11 team in the country.

Clowney vs. the media 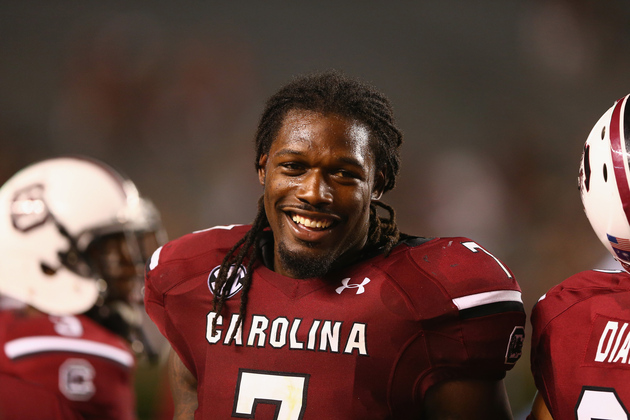 Steve Spurrier is a lot of things. He is a legendary football coach, a grandfather of seven children, and a person who implicitly expresses his approval of a peer by saying "he plays a little golf." Spurrier is not a person who gives a great deal of thought as to how his comments are interpreted. After all, he responded to an internet frenzy about whether or not he was drunk during The Steve Spurrier Show by saying he’s had a few beers after every game he’s coached for the past 27 years.

Most of the time, this is not a problem for Spurrier, his employer, or his 75 employees student-athletes. Usually, it just means that his weekly press conferences and call-in shows are a bit more candid and lively, replete with "we gotta quit doin’ that crap" and "we pooped around out there in the second half."

But the prominence of Clowney as a college football player, an NFL prospect, and tackler of Vincent Smith has brought newfound scrutiny to Spurrier and his South Carolina football program, and his every word is being analyzed in a way that he is not at all accustomed to. But, even in that context, the Head Ball Coach doesn’t seem to understand or care how saying, in a moment of frustration, "If [Clowney] wants to play, we will welcome him to come play for the team if he wants" does a great deal more than light a fire under his star defensive end. As we’ve seen, it also creates a nationwide media frenzy.

Even when Spurrier came to Clowney’s defense last week, he threw in this strange line: "If [Jadeveon] doesn’t play another snap here, we all should be thankful and appreciative that he came to South Carolina."

The moment I heard this come out of Spurrier’s mouth, I understood both that Spurrier meant this as a sincere expression of appreciation for what Clowney has meant for Gamecock football and that it would be portrayed as an omen that Jadeveon had all but hung up his garnet and black cleats. (He earned a team grade of 91 against Arkansas despite ESPN running with a rumor that he'd missed the team bus.)

But Spurrier said it because he was thinking it, and at 68 years old, that’s not something he’s going to stop doing.

"Too much has been made of it. Every wants to make it about Tiny and Jadeveon, but he'll be lined up over [Preseason All-SEC guard] Ju'Wuan James as much as Tiny. I think people make too much of it. That was one game, and I don't know why, I watched that game. It's our entire offensive front. So I'm not buying that," Jones said on Tuesday.

There's a clear team-first emphasis in Tennessee's media efforts against the idea of a rematch between Richardson and Clowney, but it's too late to change the narrative. After all, Richardson himself pushed his rivalry with Clowney throughout the offseason, and it's easy to understand why: after leading a successful effort to neutralize him for 59 minutes, Richardson slipped contain on a 1st and 10 on the Gamecocks 19-yard-line, allowing Clowney to sack and strip quarterback Tyler Bray to secure a three-point USC win. Richardson, who wasn't available to media this week due to class obligations, spent the offseason admitting he was at this best until the absolute very end.

Before the sack, Richardson's performance against Clowney is an offer any NFL GM would spend first-round money on: when applied on roughly one-third of called offensive plays in a single game, Tiny Richardson can nullify a premier pass-rushing defensive end with single coverage with a 95.4 percent success rate in clinical trials. No chip-and-peel tight end needed! No third-down back in protection keeping you from using a five-wide set!

Not counting punts and a kneel-down, Tennessee recorded 69 total offensive plays against Carolina in 2012, scoring 35 points in 11 drives. Richardson was on the field for 66 plays despite battling a then-secret knee injury, and Clowney played the majority of the game (56 total snaps) but completely missed UT's second drive (10-plays, 75-yards for a touchdown) while having his ankle retaped.

Tiny successfully engaged Clowney on 24 of 25 plays that day, 22 of them one-on-one. Of those 22 meetings, eight were designed runs and 14 were pass attempts from Volunteers quarterback Tyler Bray, an important designation because of Clowney's improvement vs. the run between the 2011 and '12 seasons. One SEC assistant coach told SB Nation before the season that his growth against the run had turned Clowney into a "complete lineman" by scouting standards, so he was a threat on all 22 battles with Richardson.

"Certainly there's a lot that would come from the matchup of those two and what went on last year, but there's nothing we want to do to take away from the team part of it, and specifically the entire line's effort," Tennessee offensive line coach Don Mahoney said.

Jones is correct about Clowney not always lining up outside and possibly going against Tennessee's guards, but only because of Richardson. After lining up at his normal DE position for the entire day in last year's game, Clowney moved inside on the Vols' final drive to try and find a more advantageous match-up. As in a non-Richardson one. It didn't help, as the Vols earned 36 yards on those four plays when Clowney rushed the center-guard A-gap, recording one tackle. Since last season Clowney has moved inside with increasing frequency.

"That's what we want our guys focused on this week, the awareness," Mahoney said. "[South Carolina's] a speed group that moves around a lot, not just Clowney. But when you see ends moving inside, you have to change your awareness, not so much your technique. All of a sudden you're going from sitting on a guy that's 300-plus to a one that's maybe 280 with a jet getting off the ball."

Mahoney said that Richardson's fixation on the Clowney fumble play (Tiny admitted in July to re-watching the game film hundreds of times as off-season motivation for conditioning) is just who he is. And much like a defensive back being coached to forget getting burned by a deep pass, so too must Richardson let go of Clowney's single victory against him.

"Coach Jones preaches a snap-and-clear mentality. Snap and clear, move on to the next play. And there's a fine line between [saying to a player], 'Hey, don't worry about it' and teaching them. Tiny got upset against Georgia when [quarterback Justin Worley] got sacked. This was the third quarter, and I told him, 'Hey, there's a lot of ball left," and when we came back to tie it, sure enough, he had snapped out of it. He saw how quick the game can turn," Mahoney said.

Mahoney, aided by new strength coach Dave Lawson, was charged with taking an offensive line that was by far the Vols' deepest and most talented unit on Derek Dooley's old roster and slimming them way, way down in order to keep the tempo of of a Jones offense that aims for around 80 plays a game.

"It takes a lot of energy to pass rush on a 16-play drive. You see a different person on play one than on play five, six, seven, eight. I like it as an offensive lineman because it slows guys down," James said.

"Everybody can get tired." -Tennessee right guard Zach Fulton

"We'll start looking at body language on a long drive," senior guard Zach Fulton said. "You'll start seeing hands on hips or bending at the waist, that's a tell. Everybody can get tired."

James said that the offensive line noticed familiar protections and calls watching last weeks' tape of Arkansas and the Gamecocks, where he noted that South Carolina's effort in the defensive front looked its strongest all season. The Hogs' offensive coordinator Jim Chaney and offensive line coach Sam Pittman came from Knoxville, where UT allowed a .67 sacks-per-game average, fourth best in FBS in 2012. Under the current staff, Tennessee has allowed only seven sacks halfway through the season.

With some defiance, both James and Fulton downplayed the idea that an up-tempo offense with quick-release passes meant that linemen had to hold their blocks for less time.

"It doesn't feel that much different from last year. The ball got out fast last season because we had great receivers, just like this year. You still have the same amount of strain and effort, you're still doing your job," James said.

Like Clowney, Richardson is a junior that's already penciled in as a NFL first-rounder. The rest of the line features starting seniors, and both James and Fulton have strong draft potential as well. Saturday will be as close to an offensive lineman's clutch moment as the position allows, a chance for anyone of this group to face the most talked-about defensive player since Lawrence Taylor and add a stop to their resume.

More: How to stop Clowney: The plan teams are using this year

"I guess so, but it doesn't matter who is on me. You just love those moments when you drop back on third down. That's it for an O-line. If we all keep protection. Man on man. Mano y mano. Time to suit up and go," Fulton said.