The league as a whole might not be elite, but the fact that the ACC has three national title contenders at the halfway pole of the season is a step in the right direction.

Share All sharing options for: Welcome back, ACC football: FSU-Clemson shows conference on the right track

The ACC has two teams in the top five of the second AP poll of October. The ACC hasn't had even one team in the top five this late in the year since 2007, except for two quick entries and immediate exits by Virginia Tech. If on Saturday night, the sensation of watching a huge ACC matchup at this stage in the season feels unusual, that's not your mind's not playing tricks on you.

It's no understatement to say that recent years have been difficult for the ACC.

The conference hasn't produced a national champion since 1999. It hasn't produced a participant in the national title game since 2000. The conference is 3-13 in BCS bowl games, with the two wins since the 1999 national championship game coming against noted powers Cincinnati and Northern Illinois. ACC teams have rarely even been in the national title conversation by the latter stages of the regular season, leading to some sparsely attended conference championship games. Moreover, the league hasn't finished in the top half of the Sagarin conference ratings since 2008, so it's not as if the ACC's middle and lower tiers have been strong, either. No, the entire league has been experiencing a trough.

This is precisely the opposite of what John Swofford intended when he launched the conference into expansion in the early Aughts. The ACC added Miami, Virginia Tech, and Boston College -- over the opposition of some powerful basketball coaches -- primarily because he judged that football was a more lucrative sport than basketball.

However, like so many investors in the early years of the millennium, Swofford was buying assets with inflated values. Boston College brought a market, but one that neither cares about college football nor produces high school talent sufficient to supply an upper-echelon program. Virginia Tech brought a fan base, a recruiting area, and a significant TV market (kinda sorta), but it also brought a legendary head coach who sometimes views an effective offense as a luxury rather than a necessity. And Miami brought a program that was about to enter a significant down period.

Add in Florida State suffering through a dip in the last years of the Bobby Bowden era and Clemson suffering through the almosts of the Tommy Bowden era, and you have a recipe for a conference that for years was little more than Virginia Tech winning without having to evolve on offense and a series of underachieving programs beneath the Hokies. The fact that the ACC generally did well in the NFL Draft just reinforced the notion that the programs in the league were not properly utilizing the resources available to them.

While the ACC has not taken a collective step forward in 2013, we enter the second half of the season with three of the league's programs in national title contention. In other words, there will be a reason for the national media to devote interest to ACC football this November and the conference title game stands a good chance of being must-see television for fans around the country.

The evidence as to the overall strength of the ACC in 2013 is mixed  According to Sagarin, the ACC is fifth out of the five major conferences, lagging behind even the much-derided Big Ten. However, according to SRS, the league is a solid third, with the average ACC team a field goal better than the average teams from the Big 12 and Big Ten.

Whether you use F/+, Sagarin, SRS, or the human polls, there is broad consensus that Clemson and Florida State are top-10 teams. Clemson beat a mostly-healthy Georgia team on the opening weekend of the season, and while the Tigers' performances since that win have been uneven, they still hold one of the premier scalps of any national title contender. Florida State does not have a top-of-the-resume victim yet, but the Noles have been so dominant in beating everyone on their schedule -- they are eighth in offensive F/+, eleventh in defensive F/+, second in yards per play on offense, and seventh in yards per play on defense -- that they are rightly considered a top contender.

Miami joins Clemson and Virginia Tech in the top 10 according to the AP Poll, SRS, and F/+, while they linger on the margins according to Sagarin. Thursday night's narrow escape in Chapel Hill reinforces the notion that Miami is a notch below Clemson and Florida State. Like Clemson, Miami defeated one of the contenders in the SEC East in the opening weeks of the season, although the Canes win had a whiff of "against the run of play," because they were out-gained significantly by Florida. Regardless of the Canes' slightly lower stature, Miami lies in wait for the winner of Florida State-Clemson, with a date against the Noles on November 2 and then a possible date with Clemson in the ACC Championship Game in the event that both teams win their divisions. 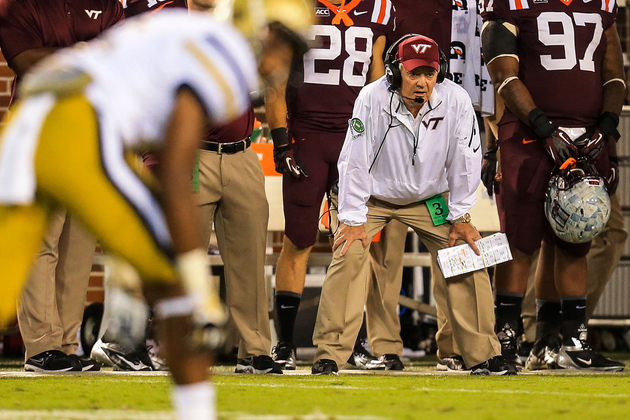 And then you have reliable Virginia Tech. The Hokies have the customary, salty Bud Foster defense, as they are first in defensive F/+ and fourth in yards per play allowed. They also have the usual, ineffective offense, ranking 72nd in offensive F/+ and 109th in offensive yards per play.* In the weaker ACC of recent vintage, the Hokies would have ridden a series of ugly wins to a conference title before playing a Orange Bowl that would make viewers want to eviscerate the memory. In a new and improved conference, the Hokies sit in the lower rung of the elite, potentially propped up by the fact that they miss both Clemson and Florida State in the conference schedule and thus just need to pull an upset in Miami to stand a great chance of playing in the conference title game at 11-1.  The ACC looks better with Virginia Tech as one of the contenders (and the least likely one, because the Hokies' offense is by far the weakest unit of the four contenders) rather than a team that is going to win the league by default.

* - Residents of the Commonwealth are being forced to suffer this fall through both a dreadful gubernatorial race that is truly a "hold your nose and pick one" testament to modern American politics and a football season in which Virginia and Virginia Tech have two of the worst offenses in major college football.  If you have a friend in Virginia who seems especially grumpy this time of year, try to understand his or her plight.

Top to bottom, the ACC could still use some work. The two new additions this year are nothing exciting right now. Virginia and the four North Carolina schools are not good, although the Tar Heels showed some signs of life Thursday night. Half the conference underwhelms.

However, leagues are often judged disproportionately on the quality of their top teams. In terms of perception, the SEC got away with a whole lot of mediocrity in 2011 because LSU and Alabama were the two best teams in the country. The fact that the ACC has teams worthy of national title consideration and teams that don't look like automatic roadkill in BCS games is a step in the right direction.

After years of looking like an ill-considered gamble, John Swofford's vision for the league may come true after all.