Is the Pac-12 the best conference in college football right now?

For much of this offseason, Big 12 members questioned SEC supremacy. But when the 2013 season began, a different conference decided to take on the big boys.

Share All sharing options for: Is the Pac-12 the best conference in college football right now?

On one hand, you've probably come to accept that this isn't the SEC's best year. The defenses are green and less elite (for now). Alabama hasn't quite reached Alabama altitude yet. Georgia's been destroyed by injuries. South Carolina's Jadeveon Clowney hasn't lived up to impossible hype. Tennessee, Arkansas, and Kentucky are starting from scratch. So is Texas A&M's defense.

The league that produced five of the top nine teams in last season's final AP poll currently has just three in the top 10, and while this perhaps feels temporary -- there are a lot of really young defenses in the SEC this year -- it does feel like some of the shine has come off.

Meanwhile, you've also probably noticed that the Pac-12 is having a pretty damn good year. Oregon looks as good as ever after losing head coach Chip Kelly to the NFL. UCLA has sustained last season's surge with strong early play. Stanford might not be quite as good last year, but that's far from certain. Washington seems to have taken a couple of steps forward. Oregon State has rebounded from an early misstep, and Utah might actually be damn good. Plus, Arizona State, USC, and Arizona certainly aren't awful, and Washington State is actually back to playing mediocre football after a few years in the wilderness. California and Colorado are bad, but there's always some dead weight, right?

We've talked down about the SEC, and we've talked up the Pac-12. It's time to connect these two narratives: is the Pac-12 better than the SEC this year?

The year's first complete F/+ rankings were released this week. Whereas preseason projections and raw data are incorporated to make the engine run through the first seven weeks, Week 8 ushers in the full formula, with complete drive data, special teams adjustments, etc.

The SEC is certainly still well-represented near the top of the F/+ rankings. Thanks to an awesome special teams unit, Alabama has reassumed its rightful spot at No. 1, and six other squads rank among the top 25. At the same time, the Pac-12 boasts three of the top eight (No. 4 Oregon, No. 5 Stanford, No. 8 UCLA) and a rather incredible eight of the top 26.

The Big 12 is struggling mightily, with just one team in the top 25. The Big Ten is Big Tenning right along, with lots of teams between 15th and 35th and no elite presence whatsoever. The ACC still isn't very deep, boasting four teams among the top 16 and none between 17th and 39th. The AAC is a two-team league, with No. 3 Louisville, No. 23 UCF, and no others higher than 60th. And mid-majors basically don't exist, with only No. 35 ECU in the top 40. This is a two-league subdivision this year, and the top conference might not be the one we have assumed.

More: Alabama vs. Oregon more likely by the week 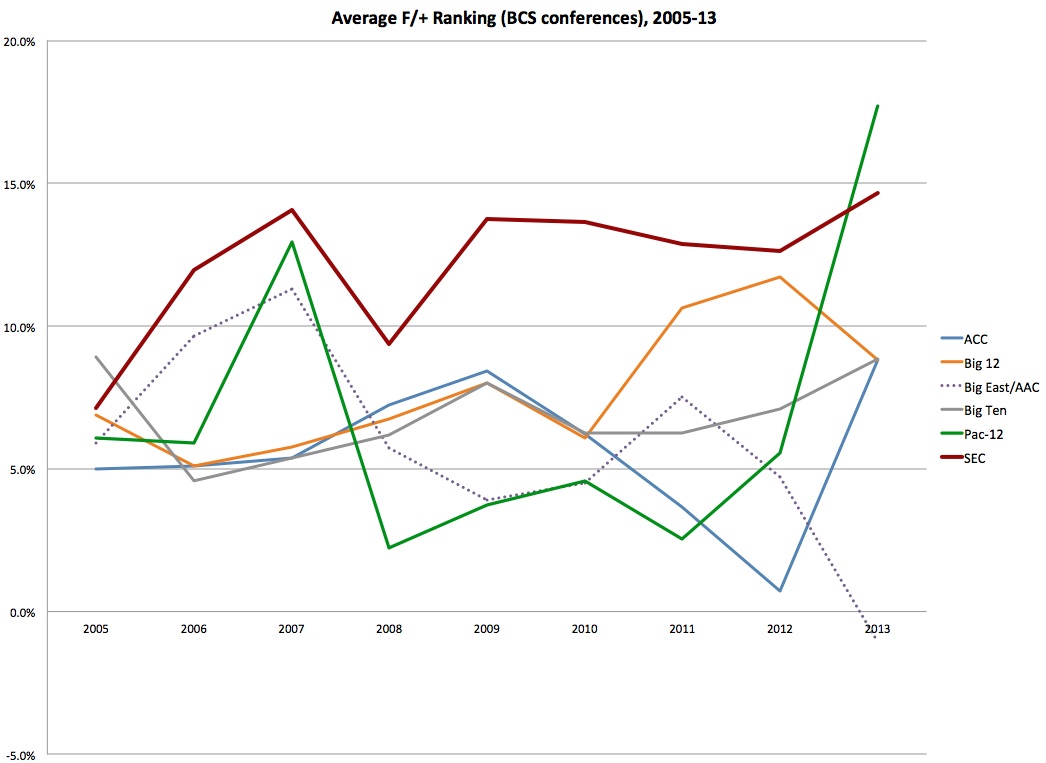 Or, in sortable table form:

While the SEC justifiably uses its seven consecutive national titles as an assertion of college football dominance, all that proves is that the league had the single best team in each of those years. But what we see here is that, from top to bottom, it has still been the best league throughout that span of time. The Pac-10, with a dominant USC squad and surging Oregon program, came close to the top in 2007, and the Big 12 was within shouting distance in each of the past two years, but the SEC has remained No. 1.

A lot of times, when thinking about a conference's true power, we ignore the dead weight at the bottom. So what happens if we take the F/+ average of only the top five teams in a given conference?

More: SB Nation sites for every Pac-12 and SEC school

Looking at things in this way, the SEC had the edge every single year between 2005-12 and had relatively significant advantages in 2006, 2007, 2010, 2011, and 2012 (though in 2011-12, the averages were skewed by Alabama's absolutely ridiculous quality). But even with its best historical power, USC, struggling through both NCAA sanctions and what we'll call iffy coaching, the Pac-12 has the lead in 2013. 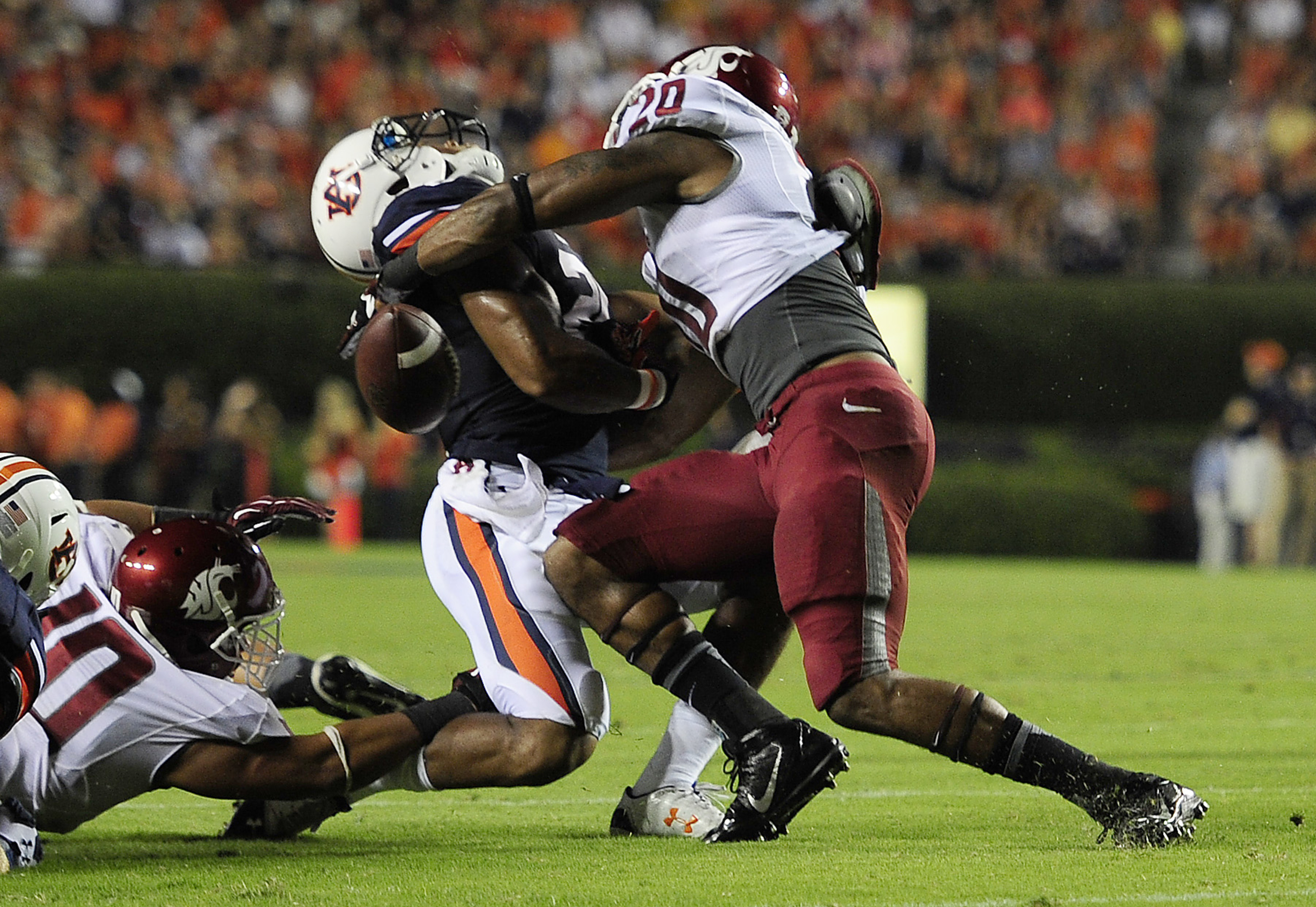 Now for the obvious disclaimer: This season is only seven weeks old. For the Pac-12 to maintain this advantage, both Washington and the completely unexpected Utah Utes have to maintain their high level of play, especially considering that SEC teams like LSU (No. 11), South Carolina (No. 19), and Texas A&M (No. 25) haven't looked as good on defense as expected, which could change. For LSU and South Carolina, it potentially began to change last week. But to date, it's fair to say the numbers think the Pac-12 has been the best conference in the land.

Okay, but not everybody likes numbers. (Understatement of the year.) A lot of us rely on head-to-head matchups to gauge conference strength. This leads us to put a lot of stock into bowl games, which is a shame since bowls come after a monthlong break and are terribly unreliable indicators of quality. Still, a decent number of solid non-conference battles have taken place this year. What can we learn about the Pac-12 and SEC from them?

First, let's define the sample. We're going to look at the following major conference-vs-major conference games (yes, including the AAC and independents BYU and Notre Dame) as comparison.

if we're looking purely at wins and losses, the Pac-12 is 7-4 in this sample and the SEC is 8-6. But simply pitting conference vs. conference doesn't tell us anything about the quality of team within the conference. For instance, the Pac-12's best team (Oregon) went 2-0 in the above sample, but the wins came against teams that were, according to F/+, No. 11 in the SEC (Tennessee) and No. 12 in the ACC (Virginia). They won those games by an average score of 59-12, which is impressive, but they should have won both games in blowouts. The games would have only been revealing had Oregon lost or barely won. Meanwhile, two of the SEC's losses came when Tennessee fell at Oregon and Kentucky (SEC No. 14) lost to Louisville (AAC No. 1, top five overall).

This sample is flawed, obviously; it includes two Pac-12 games versus independents, and it includes an SEC game versus the AAC, which is barely a "major" conference (though it's probably legit in this case, since UCF ranks 23rd overall). But however we choose to look at this, the two conferences have performed, at worst, at about an even level.

I feel comfortable in saying that the Pac-12 has been the better conference to date, and the sentiment is reinforced by looking at the remaining schedules of the teams most likely to reach the BCS title game from each conference.

Or, to put it another way, If these two teams meet in the national title game, Oregon will easily be the more battle-tested squad, at least as it pertains to 2013 games. It feels funny saying that.

What happens moving forward? Is this a one-year aberration or a new balance of power? I lean toward the former, if only because a) this whole premise does rely on teams like Utah maintaining form after early-season surges, and b) this is one hell of a surge. If the Pac-12 were a team, I'd say it improved too much, too quickly, and was due a regression. But even looking at the conferences' big names, there could be a reset at work.

Of the Pac-12's midseason All-Americans at Sports Illustrated, 11 of the Pac-12's 12 representatives are draft-eligible (the only one who's not: Utah kicker Andy Phillips) and four are seniors. UCLA's Anthony Barr, Washington State's Deone Bucannon, and Stanford's Trent Murphy are done after 2013, Oregon's Marcus Mariota and Ifo Ekpre-Olomu and Washington's Bishop Sankey won't have much more to prove, and the only thing that might bring Oregon State's Brandin Cooks back is his small stature.

Of course, the SEC will be losing a ton of offensive stars as well, from Texas A&M's Jake Matthews to Alabama's AJ McCarron to Georgia's Aaron Murray to LSU's Zach Mettenberger to A&M's Johnny Manziel (probably) and Mike Evans (possibly). But the young SEC defenses will be experienced, and let's face it: the SEC has a track record. The Pac-12 will face the burden of proof next year.

The SEC has a track record. The Pac-12 will face the burden of proof next year

This is the best the Pac-12 has looked since at least 2007, and this might be the deepest the conference has ever been. That having so many teams near the top of the rankings only puts it a nose ahead of the SEC, even with the SEC's defensive regression, says a lot about the sport's reigning power.

But we're learning a lesson from the Pac-12 this year. If you make good hires and make a lot of money, your lot in life will improve. Go figure.