Was this a horse collar tackle on Johnny Manziel?

Johnny Manziel and the Aggies came up just short on a last-minute drive, and this uncalled penalty may have been the difference.

Share All sharing options for: Was this a horse collar tackle on Johnny Manziel?

Farewell to Texas A&M's national championship dreams as the Aggies have just bowed out to the Auburn Tigers in a wild 45-41 win at Kyle Field. Johnny Manziel came back from a shoulder injury to lead his team back into the lead with 5:05 left in the game, but he couldn't get one last touchdown out of his boys in the last 79 seconds for the win.

The Aggies came close though, and one play with 20 seconds left may have swung the balance of the game. With a 3rd and 18 at the Auburn 26, Manziel broke out of the pocket on a scramble, only to be tracked down by linebacker Kris Frost for a 5-yard gain ... and here was the tackle on that play.

Not shown: flags, because there were none. 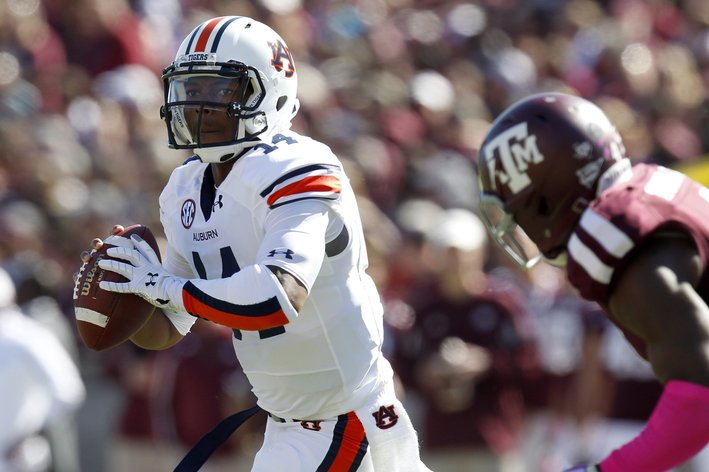 Gus Malzahn gets a signature win in his first season on The Plains.

That looks like a pretty textbook horse collar tackle, doesn't it? Frost gets his first hand on Manziel inside his jersey, which you can see get pulled down, and Manziel clearly comes down awkwardly on his legs as often happens in a horse collar tackle.

The importance of that play is rather huge; instead of the 15 yards (or in this case, half the distance to the goal) and automatic first down the Aggies would get, A&M faced a 4th and 13. That ended in a sack, and thus ended the competitive portion of the game.

You can bet A&M head coach Kevin Sumlin will be asked about that call, and you can bet he'll be mindful of the awaiting fine when he decides how to answer. But make no mistake: that tackle should have been flagged.