Update: The year's first BCS standings are out. In a surprise, Florida State ranks ahead of Oregon. Full top 25 right here.

Amid the mayhem that was Week 8 of the 2013 college football season, No. 5 Florida State traveled to No. 3 Clemson for possibly the biggest ACC game ever, and the Seminoles walked away with a never-in-doubt 51-14 victory. If they weren't before, they are now in the thick of the national title chase. In fact, the biggest challenger for the 'Noles might not even be on their remaining schedule.

If Alabama runs the table, the Crimson Tide will finish the year ranked No. 1. The big question for Florida State is, "If Oregon goes undefeated, could a 13-0 Seminoles team jump the Ducks in the BCS standings?" 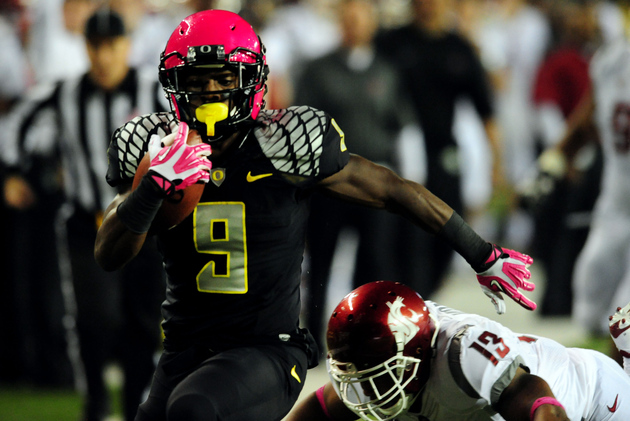 Trying to project the BCS standings after such a wild weekend may be a futile effort, but it's worth a shot. Based on last week's projections and what's gone down in recent seasons, the first standings of the year should look something like this: Note mid-major Fresno State could already be one spot shy of where it needs to be at the end of the year in order to land a BCS automatic bid (and Northern Illinois should be within range as well). If no AQ-conference champion finishes better than 16th, the Bulldogs don't have to reach No. 12 to make it in.

The computer averages for FSU and Oregon should be pretty close all year if both teams keep winning. Last week, the Ducks had a 0.9 rating from the computers, and the Seminoles were at 0.89. This week's BCS standings, which will debut at 8:30 p.m. ET, could show Florida State ahead of Oregon for now, but the Noles might not be able to hold that if both teams keep winning.

Oregon is currently No. 2 in the Harris Poll and the Coaches' Poll, and the 'Noles sit at No. 5 in both rankings. After such an impressive win on the road Saturday night, they'll move up at least to the No. 3 spot, ahead of Ohio State. But because the Ducks are already locked in at No. 2, it's going to be difficult for FSU to make up enough ground and overtake Oregon in these particular human polls, which are often less averse to change than the AP (a non-BCS poll).

Looking at the rest of their schedule, the Seminoles have home games against NC State, Miami, Syracuse and Idaho, plus road trips to Wake Forest and Florida. A win over the Hurricanes would be nice, but the showdown against the Gators isn't looking as big since Will Muschamp's team has already dropped three games. Oregon hosts UCLA, Utah and Oregon State and visits Stanford and Arizona. Both teams, if unbeaten, would play conference championship games against less-than-stellar opponents.

All in all, Oregon has the more impressive schedule over the remainder of the season. The Ducks could play three or four ranked teams, while FSU could play just one. For Florida State to jump an undefeated Ducks team, the Seminoles have to pretty much destroy every team they play -- which, based on the Clemson and Maryland results, isn't impossible -- and hope Oregon begins to stumble against the lesser teams it has to face. The Noles aren't likely to have the computer advantage by the end of the year, so they'll have to win eyeballs.

But expecting the Ducks to win a bunch of close games is probably too much to ask. For Jimbo Fisher and Co. to move into the top two, they likely need the Ducks or Crimson Tide to lose a game. Which also sounds like a lot to ask, but this is college football.

How does the chaos shake out?

Last weekend featured several surprises across the country, but it was nothing compared to what we saw in Week 8. Five AP top-10 team lost -- the first time that's happened since 2007, per ESPN -- and a total of nine top-25 teams went down. Five of those lost to unranked teams. Once the dust settles, the first BCS standings of the year will look much different than what would have been expected before Saturday.

Six teams in the top 12 of last week's BCS projections by CBS Sports' Jerry Palm and ESPN's Brad Edwards lost (Clemson, LSU, Texas A&M, Louisville, UCLA and South Carolina). When five top-10 teams lost in Week 4 of the '07 season, Florida, Oklahoma, West Virginia, Texas and Oregon all remained in basically the same pecking order in the next week's rankings. The only change among the group was Texas falling below Oregon, due to the Longhorns' loss to unranked Kansas State and the Ducks' loss to No. 6 Cal. With that in mind, it's reasonable to assume UCLA will suffer much less damage than the other teams that lost. 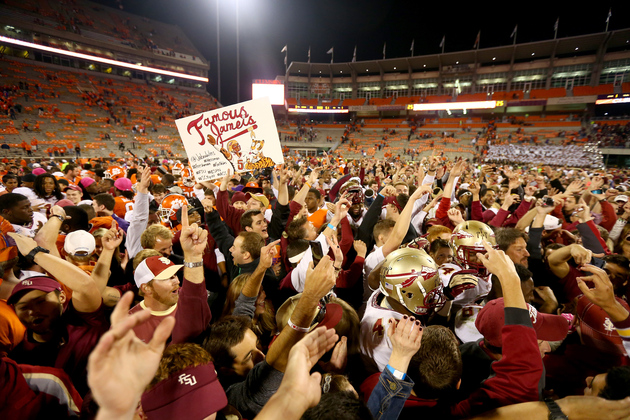 The biggest winner of the weekend has to be Missouri. The Tigers, projected as No. 13 by the experts going into Saturday, could jump all the way up to No. 5 thanks to another win over a ranked SEC opponent. Baylor will also make a nice move inside the top 10. Auburn, which was ranked in the No. 23 range, should move up to the teens. The Tigers' road win at a top-10 Texas A&M team was awfully similar to Missouri's road win over top-10 Georgia the previous week. Mizzou jumped from 20 to 13, and Auburn will probably get a similar bump this week.

The Bruins lost their perfect record to one-loss Stanford on Saturday, and they'll try to give the same treatment to Oregon next weekend. A Ducks win would keep them on track for a championship berth, but a loss would fully open the door for Florida State. Seminoles fans should be rooting hard for UCLA in this one.

The Gamecocks have fallen, but they're the last hurdle in a brutal three-game stretch for Missouri. If the Tigers can go 3-0 against Georgia, Florida and Carolina -- with a backup QB in the last two -- they'll have a real shot at running the regular-season table. As was noted last week, that would put them in position to earn a BCS title game berth with a win in the SEC Championship Game.

The Red Raiders are probably the most unheralded undefeated team in the country, but a win over the Sooners in Norman would make people take notice. Kliff Kingsbury's team would move to 8-0 and 5-0 in Big 12 play, and it would have a shot at a Big 12 championship and a BCS bowl game, perhaps even an at-large bid.