All 12 BCS National Championship contenders, ranked by odds of winning out

Winning is hard. And the numbers say that most of the teams we think could win out from here probably won't.

Share All sharing options for: All 12 BCS National Championship contenders, ranked by odds of winning out

We fall into the same trap every year, and it makes sense. When the initial BCS standings are released, we automatically play the What If? game with scenarios that feel likely, but in no way actually are. What if we finish with five undefeated teams? What if Florida State gets left out of the title game? And my goodness, Alabama-Ohio State and Florida State-Oregon? What a playoff this would be!

Odds are a funny thing, though. If you have an eight-in-10 chance of winning each of your 12 games, that still means you're most likely going to drop a couple along the way. That doesn't mean you're a choke artist; it just means it's really hard to do what you're supposed to do every single week.

There's only about a four percent chance of that happening.

Let's put this another way. Alabama, Florida State, and Oregon are all incredible teams with minimal weaknesses. We spent quite a bit of oxygen this week trying to figure out what might happen if or when all three of them finish the regular season undefeated. But really, there's only about a four percent chance of that happening. It is very likely that at least one of them will lose in the next seven weeks, even though they will be favored in, at worst, 18 of 19 remaining contests (including conference title games).

A year ago at this time, each of the top five teams were undefeated: Alabama, Florida, Kansas State, Oregon, and Notre Dame. And we were reveling in the BCS doomsday scenarios of an undefeated Oregon or Notre Dame squad getting left out of the title game. But then four of those five teams lost, as did the five other remaining undefeated teams.

Two years ago, seven of the top eight teams in the BCS standings were undefeated at this time: LSU, Alabama, Oklahoma State, Boise State, Clemson, Stanford, and Kansas State. And six of those seven lost before the end of November.

Where did these win probabilities come from?

Note: These odds come from projections made using the F/+ rankings. They seem aggressive in some cases (Alabama having an 89 percent chance of beating LSU, for instance), but they are based on the magnitude of your advantage in the F/+ ratings, with a home-field adjustment. And the top teams have, as usual, separated themselves rather dramatically from the pack.
These projections will get a Bayesian tweak in the offseason, which will probably tamp down the higher numbers (Alabama having a 99 percent chance of beating Tennessee, for instance). But the higher odds actually help deliver the overall point, which is that even teams with great odds will probably drop a game at some point. (And by the way, my methods here are different from what Brian Fremeau is using for ESPN Insider pieces.)

Safe to say, Alabama has gotten things figured out since barely surviving Johnny Football in Week 3. Obviously an LSU team bringing its A-game could seriously challenge the tide, and the Iron Bowl trip across the state certainly looks more difficult than it did a few weeks ago, but Alabama's odds are still predictably strong. While LSU has had some pretty distinct ups and downs recently, Alabama has been mostly up.

This is perhaps the strongest proof of how odds work. Even though Florida State would have a better than three-in-four chance of beating either Virginia Tech or Miami on a neutral field in the ACC title game, and even though the rest of the regular season slate is beginning to look painfully easy, the Seminoles still only have a 52 percent chance of finishing 13-0. If they slip up along the way, it will be used as another example of Florida State Being Florida State, but really, odds of winning every game just aren't great for anybody.

I laughed and laughed at the thought of Baylor having a 99 percent chance of beating Texas. But then I remembered that Baylor just played a team that almost beat Texas (Iowa State lost by one controversial point) and beat them by 64 points. Texas is improving overall, and I'd expect the odds to drop a decent amount by the end of the season, but based on the teams' overall 2013 resumes, you can understand why the numbers see what they see.

(Meanwhile, Oklahoma really has fallen to 34th overall. The Sooners don't have much of a chance of escaping Waco with a win in their current state. Every day, I feel a little sillier about sticking up for the upper half of the Big 12 this summer.)

Ohio State has yet to lose since Urban Meyer took over in Columbus. That is very, very impressive. It's also a flagrant thumbing-of-the-nose at the odds, which probably would have had the Buckeyes losing at least three or four of their 19 games with Meyer. Still, here they are. And at only 11th overall, they have quite a bit of work to do to continue winning games that are closer than they should be in the third quarter.

The good news, however, is that someone above the Buckeyes in the BCS standings will probably lose a game. So if Ohio State continues this magic act, the odds are decent that the top two of the standings could be in play, elite or not. 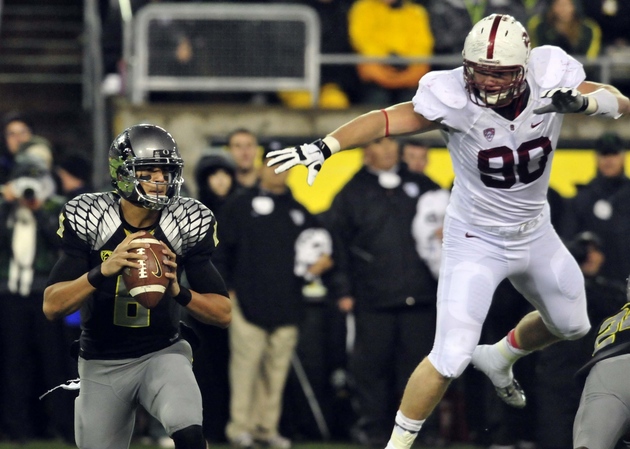 The two formulas that make up the F/+ rankings -- my S&P+ ratings and Brian Fremeau's FEI -- each tend to inadvertently play favorites. For Ken Pomeroy's basketball ratings in the past, Wisconsin has notoriously cracked the code. My numbers always seem to rate Florida State and BYU higher than others. And right now, Stanford owns the key to FEI. Thanks in part to outstanding special teams, the Cardinal rank second in FEI and third overall, ahead of Oregon and Baylor. It happens.

But it does give us some perspective on how difficult Oregon's trip to Palo Alto could still be in a couple of weeks. Stanford dropped one it shouldn't at Utah, but Utah's good (No. 12), and the Cardinal are still very sound overall. Beat Oregon, and they're perhaps just one or two upsets elsewhere from being right back in or near the top two.

Wow, does F/+ love the Pac-12. Arizona State's domination of Washington -- a team that almost beat Stanford and stuck with Oregon for most of 50 minutes -- vaulted the Sun Devils to sixth in the F/+ ratings, a pretty huge jump for this time in the year. With Utah sticking at 12th, Washington at 16th, UCLA at 18th, Arizona at 20th, and USC somehow at 21st (well, I know how: the defense still grades out very well), the Pac-12 has eight of the top 21 teams overall. And in six remaining games (including the Pac-12 title game), Oregon would probably play five of them. The Ducks are great, but the remaining slate is a monster. 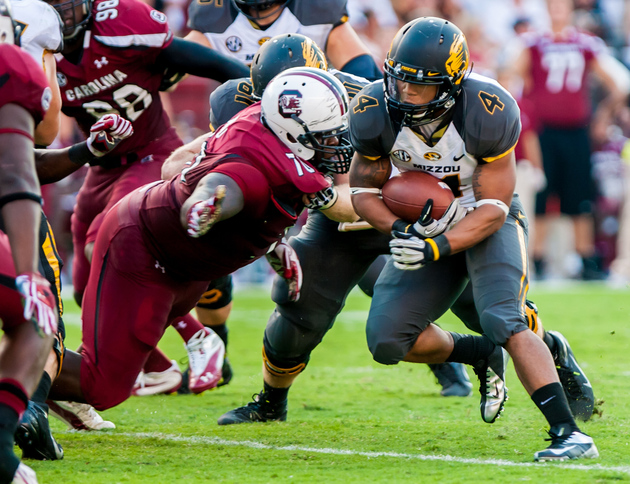 Obviously Clemson now must hope for Florida State to get upset twice in conference play to get into the ACC title game. And that almost certainly isn't going to happen. And even if it did, the Tigers might not be able to take advantage of it. They are given only a 44 percent chance of going 3-0 against Maryland (not accounting for recent injuries), Virginia, and Georgia Tech.

It's funny how a potential date with Alabama tamps your odds down.

With a win over South Carolina on Saturday, Missouri would own a tiebreaker over each of the assumed top three other teams in the SEC East. With wins over both South Carolina and Tennessee, the Tigers would basically clinch the division two days into November. But while their odds of pulling that off are certainly decent, there's a difference between that and finishing undefeated.

Miami's a better team than it looked in a narrow win over North Carolina last Thursday night, especially if Stephen Morris' ankle ever heals up completely. But with a trip to Tallahassee coming up and a potential FSU rematch looming a month later, obviously Miami's odds of remaining among the ranks of the undefeated are minimal. 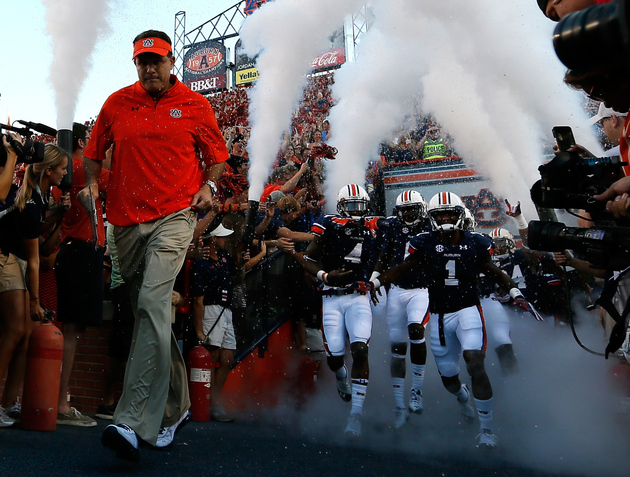 Win the next three games, and Gus Malzahn all but locks in his spot in the top two of the SEC Coach of the Year voting (with Gary Pinkel). Win the two after that, and this season goes from surprising to shocking.

At 33rd, Texas Tech is the weakest of the major-conference undefeateds -- Fresno State ranks 41st, Northern Illinois 69th -- and even in a diluted Big 12, the odds of the Red Raiders escaping the regular season at 12-0 are … not good.

There's no question that if UCLA wins out, the Bruins could end up third (at worst) in the BCS standings. With games against so many solid teams, the computers will love the Bruins (even if the BCS computers don't love the Pac-12 as much as F/+ does). But there's also no question that there's little chance of this happening. UCLA's good but flawed; winning the next seven games would take a nearly flawless group.

But you still might want to go ahead and prepare yourself for a Bama-FSU title game.

• The week’s best stats: Alabama’s D is back

• Why we shouldn’t have been surprised by Florida State