Mizzou fans care about pro sports and don't all talk quite like the rest of their new neighbors. And their SEC football team is still probably better than yours.

COLUMBIA, Mo. - There were dots of red inside sold-out Faurot Field. There was red up and down campus, dotted among the black and gold that made up Missouri's crowd of 67,124. And even those in red saw red. A South Carolina fan in garnet, fresh to this new Columbia, saw a friendly shade a block away and yelled, "Go Cocks!"

"WHAAAT? GO TIGERS, ASSHOLE!" the accosted replied, spinning around to reveal a St. Louis Cardinals hat, leaving both parties a little embarrassed for each other. This scene repeated itself throughout the afternoon.

"I hope we win today. And I think Missouri will, too. I think we will win today, too," a distracted Tiger fan, half-clad in Cardinals gear, said outside Faurot Field.

Mizzou fans didn't lack for gameday passion in the infamous Lot X,  even if a healthy amount of it was directed towards a baseball game. The familiar importance of a World Series was offset with a newfound, if not yet totally understood, 7-0 record in SEC football.

Missouri the fan base is as much in step with the customs of the SEC as Missouri the state is in step with the American South, and with the exact same level of of self-assurance to boot. Just as the region has long been a mash of conflicting provincialisms, so too is a tailgate by SEC, Big 12, or Big Ten standards. Just as soon as a visiting Gamecock comes across sorority girls gussying their black and gold dresses with Tory Burch and Kate Spade, there's beer pong and bratwurst and wide swaths of asphalt and sweatshirts and charcoal.

"One morning, there's a Nebraska fan out there, he's got a chainsaw. Real chainsaw. Cranks it up and cuts right through a cooler. No reason. I didn't ask, but no reason," says a Missouri fan named Spanky who's agreed to guide me through Lot X, a cacophony of generators and stereos and young alumni.

He'd rather Mizzou lose 59-0 than the Cardinals drop Game 3 of the World Series.

Mixed among the brown liquor bottles is Busch Light. It's everywhere and consumed without pretension. Despite Lot X's shoulder-to-shoulder crowds in some areas, it is never closed to traffic, even if you're blocking the traffic. I'm assured this is a far more civilized arrangement than the former hot tailgate spot, "Reactor," a parking lot in the shadow of an actual nuclear reactor that became a frat pit of alcohol poisoning and criminal excess in past years.

"I went to Mizzou, but I've been a Cardinals fan my entire life," one of Spanky's friends tells me. Moments before he had shouted that he'd rather Mizzou lose 59-0 than the Cardinals drop Game 3 of the World Series against Boston.

"No, no, I disagree," the girl next to him says. "Because the Cardinals will be back in the World Series a few more times this decade. When is Missouri going to be undefeated? Honestly?" 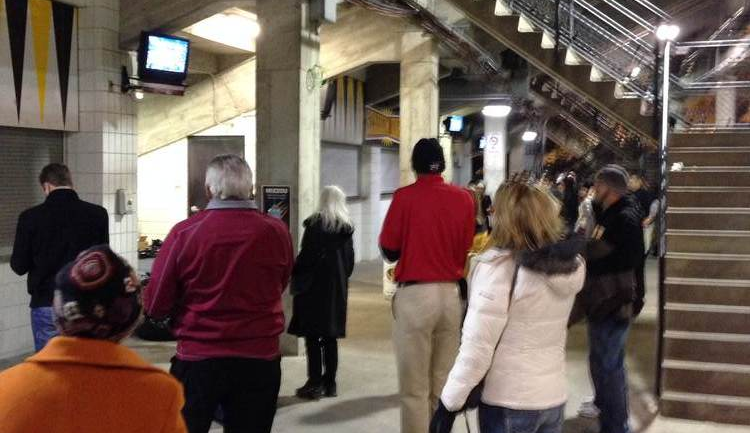 Even as both teams traded touchdowns to open overtime, throngs of fans gathered in the tunnels to watch the World Series on one concession stand TV or the stadium Jumbotron, bouncing between concern for the Cardinals' David Freese and Mizzou's Maty Mauk. In addition to showing the game in the concourse, Faurot Field's AV team provided audio and video score updates by inning, eliciting some of the night's biggest cheers. If that rankles your sense of what a SEC fan base should act like, it's worth noting that Missouri's student section was full before, during, and after the Tigers' Andrew Baggett shanked a 24-yard field goal in the second OT.

The fact is, none of this matters to Missouri, the football school, the certified, like-it-or-not SEC East leader, nor should it: not an overwhelming MLB distraction among its fans, not the cultural incongruity of its tailgates, and not the ongoing disrespect from its new rivals. Just moments after being walloped by conference leader Alabama, Tennessee's "Tiny" Richardson publicly guaranteed a win next week in Columbia.

"We're still on track. We're still capable of the goal," an angry Missouri DE Markus Golden said after the game. 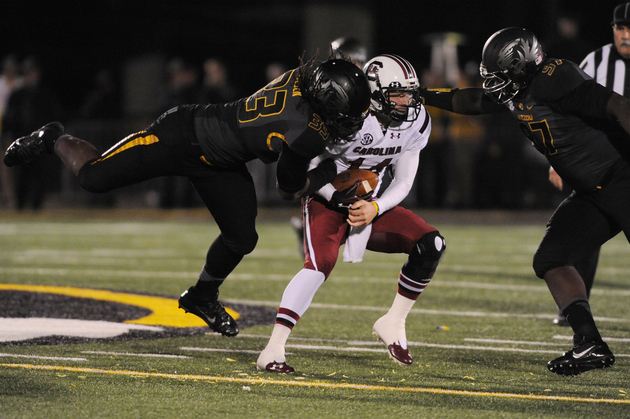 The chronology of Saturday night will allow for an anti-Missouri contingent to argue that, in the face of national attention and with the Tigers' defensive line on the necks of South Carolina, they choked. They revealed their true selves. You could also argue that for the better part of three quarters, the Gamecocks offered up an offensive attack that was equal parts Florida-inept and Georgia-injured.

"We had a lot of attention on us this week, but I can remember last year when nobody talked about us. You can't blame it on that. We let this one slip away, but yeah, because of that [attention], now it's gonna hurt bad," Golden admitted.

Golden is among a posse of excellent Missouri defensive linemen, unrecognized in a league that prides itself on the country's best pass-rushers. Twice they forced fumbles from South Carolina's Mike Davis, the SEC's leading rusher. Golden's cohort Michael Sam entered Saturday as the league's leader in tackles for loss, but is a complete stranger compared to Jadeveon Clowney. And it was Mizzou defensive end Shane Ray providing a fourth-down stop of the sputtering Gamecocks in the first half.

"Of course you listen to all that outside stuff about not being known, because you want to turn a negative into a positive. We got a bunch of guys who could play anywhere, so when we hear stuff like that we want to go show you how we're the best defensive line in the SEC," Golden said. 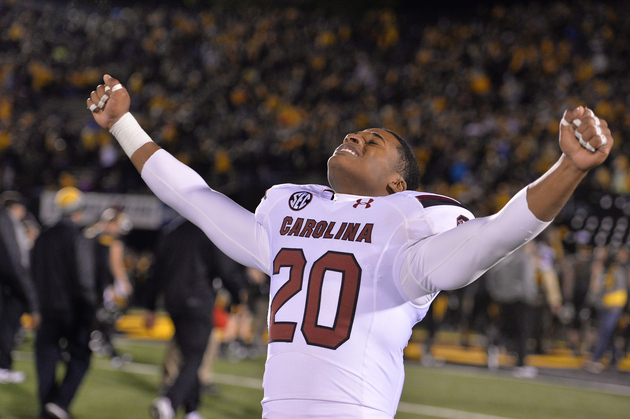 Before Shaw's return from an injury last week ignited South Carolina's passing game, the Gamecocks had flatlined, turning the ball over five drives in a row (two fumbles, one interception, and two failed fourth-down conversions). But once Shaw showed Gamecocks head coach Steve Spurrier that he was accurate enough on the run, screen after screen after screen neutralized Missouri's pass rush. On the other side, Mauk struggled to engineer a game-closing drive.

"They just got 'em off," Golden said. "They ran all those screens, and we weren't ready for 'em. They got their passes off pretty quick, but we gotta get out there and make it happen. But the screens worked."

"A couple times they were in man, and Mike [Davis] just shook the tackle," Spurrier said after the game. "But it's a good little play against zone, unless you've got a guy back there, and they didn't."

"Still though, Missouri is a very good team. They've got four more conference games and we've got two more, so who knows what can happen," Spurrier said.

Just moments before those ubiquitous Cardinals won 90 miles east, the South Carolina coach was quick to note that the Tigers still lead the SEC East by a game. The new guys are still mathematically the second best team in the SEC with November days away.

Golden said he expects the Tigers to return to their bizarre, first-place underdog status. But respect is coming, more and more after each week.

"A couple guys from South Carolina were just saying how great a D-line we were and talking about a couple individual players. But after every game we've heard that," he said.