The Cougars coach shows off some ugly duds before bringing in the real ones.

Tony Levine seems like a fun guy. The Houston coach has a reputation for having a little fun, previously tricking the media on the past two April Fools' Days by sending out fake press releases.

This season, he's taken it up a notch, turning his pranking attention to his players with a fake Halloween uniform announcement. Video is above, and a h/t to Football Scoop.

Levine built up the drama by teasing a new uniform for Houston's Halloween night game against South Florida, asking his players to count down from 10 with him to unveil this ... abomination? We can call it an abomination.

After some players feigned (we hope) excitement, the real uniforms were unveiled, via players sneaking into the auditorium. 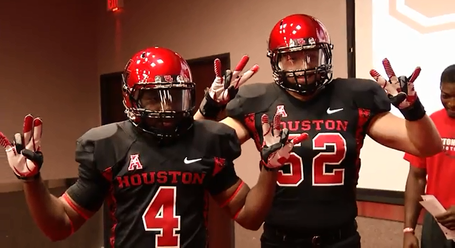 Previously, Levine pranked media members by sending out a press release that star running back Charles Sims would move to cornerback and another that unveiled a hideous new logo, which included the greatest paragraph in press release history.

"I've always thought that the word ‘of' did not get the respect it deserved," Levine said. "When you look at the way we speak and form acronyms - for example, the United States of America being U.S.A. - ‘of' always gets excluded. And as I'm sure most people have, I've often times wondered why ‘of' is spelled o-f and not u-v.

Houston is 6-1 this year, so maybe you can have fun and coach a successful football team. Nick Saban, we expect a similar stunt by the end of the year.

• Oregon jumps Florida State for No. 2 in new BCS standings

• You have to see what Ohio State’s band did