This Week In Schadenfreude: Missouri and the importance of plumb uprights

This Week In Schadenfreude trawls the college football internet for people saying outlandish or silly things.

This week: Missouri should have paid a union contractor! Charlie Weis achieves something! What happens when you play Oregon! Virginia Tech wears orange (incidentally losing to Duke while wearing orange)!

Share All sharing options for: This Week In Schadenfreude: Missouri and the importance of plumb uprights

Missouri just suffered one of these losses. They were up 17-0 against South Carolina, having already cleared Georgia and Florida, cruising towards a titanic season-ending matchup against Texas A&M and the SEC Championship Game. Then Connor Shaw hobbled on to help South Carolina score on their final three drives, South Carolina converted fourth and goal from the 15, and the damned kicker misses a 24-yarder to send it to a third OT. Mizzou's sitting around trying to pick up the pieces of their beautiful season. Bill Connelly's already posted a beautiful piece about pain and football. If you want that kind of thing, go read it.

You're still here. Here's this other stuff. The immediate aftermath:

That ranks as the most devastating loss in program history – mizzoudiehard

I am barely aware that Mizzou even exists, and I can still name two much more infamous defeats. Yeah, these.

Fifth down, kicked ball and bagget banging it off the upright... I feel like a true tiger fan today.

I don't know who these other two guys are, meanwhile, but I hope they're far away from "rigidbarofsteel":

rigidbarofsteel: I wish my mantel had the severed foot of Baggett, Shevon Wiggins, and Lin Elliot.

shorty: In the middle ages, baggett would have had his legs removed in an unpleasant manner..

You may have noticed a lot of ARGH FIRE PINKEL business above, and… yeah, that's weird.

If Pinkel were fired/retired who would you replacement with?

Not saying he is going to be fired, we all know Alden loves him and unless he completely tanks the remainder of the season I don't see it happening.

In the cold light of morning, at least this guy gets a lot of pushback, unless this guy is serious.

Kirk Lafrentz - I like consistency! + he can recruit StL !

Finally, the saddest "what if" in the history of what if:

if our uprights were plumb, that kick bounces thru 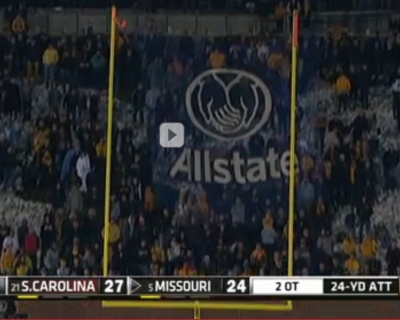 Missouri: you have well-earned possession of the Tears of Unfathomable Sadness.

WALTER WHITE IS NOT AMUSED

It takes quite a day on the other side of the ball to hold Duke to 198 yards of offense and win, and Virginia Tech had that day. Aaaand VT blog The Key Play is aflutter about…

Did anyone else go "...oh shit" when they saw the uniforms for the first time?

The orange uniforms, however, have to go. Forever. Burn them. Never wear orange again.

Could someone compile a list of games that we have played in orange pants for me? My guess is we lost most of them.

I told my son as we made the march back to the car that the silver lining was we probably would never see these orange uniforms again.

I knew we were in trouble at "Enter Sandman".

They're not wrong — orange and brown is impossible to pull off, as Bowling Green has been discovering in varied ways for decades. The sartorial woes don't even end there, though.

Was anybody else upset when in the first quarter the team had jackets on? It seems like every time we have the jackets on during a game we lose. If the offense was on the field, the defense had jackets on and vice versa.

Or with what VT players were wearing.

Here is a brief list of things that I blame for today's game:

This guy is probably not even a Virginia Tech hand.

Blame the orange uni's all you want. It was Logan Thomas' inability to throw the football that cost us that game. Bad Logan reared his head and we lost to duke. No more TEs for QB please.

This… uh… this may be your problem.

I don't know if you've noticed, but Logan Thomas gives us the best chance to win every game from the offense. He's not a quarterback. We all know that

The Key Play remains one of the most reasonable places on the internet — so much so that it probably isn't even on the internet — and so we have to travel further afield. Hmm… virginiatech.sportswar.com seems like a promising URL.

It's interesting how dead this board is...

No ones even mad. Were all just kind of sad that it's gotten to this point - losing to Duke at home. It's almost like we were all waiting for this to happen.

I know I was waiting for it to happen. In fact, I have a text message from this past Tuesday to prove it. It went to the guy I go to the games with and said simply, "Time for the annual VT turd."

Malaise.
I'm annoyed and I have no idea why. I completely expected VT to do one of these.

Annoyed after a 13-10 loss to Duke… and they're not sure why. Virginia Tech has a weird, tolerant fanbase.

Things went less well than they could have for Penn State in a 63-14 loss to Ohio State that sent shivers down the rest of the league's collective spine. PSU fans should get used to it because…

Urban taking it out on PSU

Get ready for it folks, it's here to stay..
Urban has a vendetta against PSU for what they did to Joe and subsequently took him out of the drivers seat of replacing Joe...

Is this a typo?

Fans always are assed up with the opposing coach running up the score. They should be worried about there teams ineptitude for allowing it to happen.

Please don't be a typo.

Be ashamed, be very, very ashamed

It's one thing to lose to tOSFU but it's another to not even show up. Scholarships or not PSU might as well ahve forefited this game. Becasue they sure as HELL didin't show up. WTF did the D coaches do with the BYE week ?! It's men against boys out there.  !*&^%$# even Buffalo hung 20 and kept the game in question for a while.

Nebraska lost to Minnesota. Handily. Minnesota rushed like a Mason-era vintage Gopher outfit, collecting 271 yards on the ground despite HGIC Jerry Kill observing the game from the press box like Joe Paterno. Tommie Frazier's already reiterated his call for Bo Pelini's firing on Twitter. The rest of Twitter's opinion:

Life is a fragile thing. 1 min ur chewin on a burger, next min ur dead meat. #dumbdumber #Huskers #Pelini #Papuchis pic.twitter.com/ulKv8SPuiJ

Bo Pelini you suck at decisions made this weekend and its your fault Nebraska lost!!

@SoundOFF13 Andy says Pelini may be a lame duck by the time Iowa gets there. I'm gonna go with surly goat.

Texas Tech's still ecstatic that Kliff Kingsbury is the opposite of Tommy Tuberville, despite a loss to Oklahoma, and we've tread on West Virginia quite a bit this year. Kansas just got Baylor'd; time to check in with Lawrence.

No better than, if not worse than, Turner Gill was...... Safe to say we all miss Mangino.

I think some of us are being a little too dismissive in chalking it up to "Well it's Baylor." Ten years ago that would have been a pretty funny statement.

This was a very specific moment in Kansas football to remember:

Remember when football was fun?

Just wondered if anyone else did, or if that was all an LSD illusion to me.

And here is a man making a reasonable case that Kansas football has reached a new low.

Thus.....in our long and storied (BAD!) history, we always had the ability to bounce back after 2 seasons....historically the last one of the moron coach and one more before one could see improvement. Now? The SEVEN game slide from Nationally Ranked during the witch hunt of 09, 2 totally blown seasons under Gill and now two totally blown seasons under Weis. The KU Grid program has NEVER sucked this bad for this long until NOW.

Finally, Charlie Weis has made history.

UCLA had its turn with the Oregon death machine, and these things went the way they often do: a close game at halftime turns into a bloodbath, and the game devolves into a fan support group as the Ducks give the body a couple kicks for good measure. This edition:

Could be on the verge of something special in Eugene as the Bruins are tied up with the Ducks 14-14.

Memo to Mazzone: there is no such thing as field position when playing Oregon, they can score from anywhere.

Oregon punts, as does UCLA.

Best display of tackling in years. About damn time!

Oregon drives, turns it over in the redzone. It's 14-14 nearing the end of the third quarter.

WTF is going on

guess what? punting is no longer winning

if we run, I'm gonna print out a picture of Mazzone and relieve myself on it.

Hundley opens the fourth with an INT.

Our QB and OC both suck a bag of dicks right now. Excellent.

This can get ugly real fast

So, will Mora Hire Lame this week?

My wife will be happy we can go to dinner.

How does it make us feel that WSu is better offensvely

i can't believe we freaking punted

Its all about getting into the playoffs healthy, even if you have to be a wildcard

and hope you catch a streak like the Giants did twice on the arm of Eli.

this isnt even a moral victory

THROW THE BALL YOU FLIPFACE

Missouri contained most of the conference's misery, but let's check in on Tennessee briefly after they exited the first half against Alabama down 35-0.

Simple, they are in the western conf, lets rotate in ole miss or arkansas. sick of playing them when some of the eastern teams get off easy. stupid.

stephenk24: Right, who liked the OP's post? This is a witch hunt now.

BeecherVol: Sounds like the typical attitude in today's society. Things get tough walk away and quit.

You can always count on a Tennessee thread to have a guy in it saying that whatever the thread is about is signifies what's wrong with society.

• The Alphabetical, Week 10, by Spencer Hall

• How the NCAA could still beat the O’Bannon lawsuit