Ohio State at Northwestern preview: Wildcats ready for their audition

GameDay's in town, and an undefeated Northwestern squad has a chance to move into the top 10 for the first time since head coach Pat Fitzgerald was a star linebacker. Can the Wildcats pull off the upset?

Share All sharing options for: Ohio State at Northwestern preview: Wildcats ready for their audition

The door to the Northwestern athletic facilities is adorned with a shot of head football coach Pat Fitzgerald staring you down. He stands with his players at his back, ready to lead them somewhere.

Fitzgerald has already led the Wildcats, obviously. He's done so for going on eight seasons now. He was just 31 when he took over following the sudden passing of Randy Walker, and he spent most of six seasons adding layers to the foundation. He inherited a pretty intriguing squad, and with experience at the required levels, he almost took Northwestern to 10 wins in 2008. But after a few years of settling, the Wildcats had a breakthrough season of sorts in 2012, reaching 10-3 (and 17th in the final polls) and shaking a 64-year-old bowl monkey off their backs with a Gator Bowl pasting of Mississippi State.

Last year's team was young enough that it was easy to envision 2013 as a continuation, an opportunity to not only break through but really break through. Whatever Fitzgerald is building in Evanston, it will round into form in the coming seasons (assuming that, well, you know). Recruiting has picked up, new facilities are allegedly getting built, and the program is beginning to either overcome or eliminate the built-in challenges of being a small school, with minimal room to grow, in a conference of behemoths. 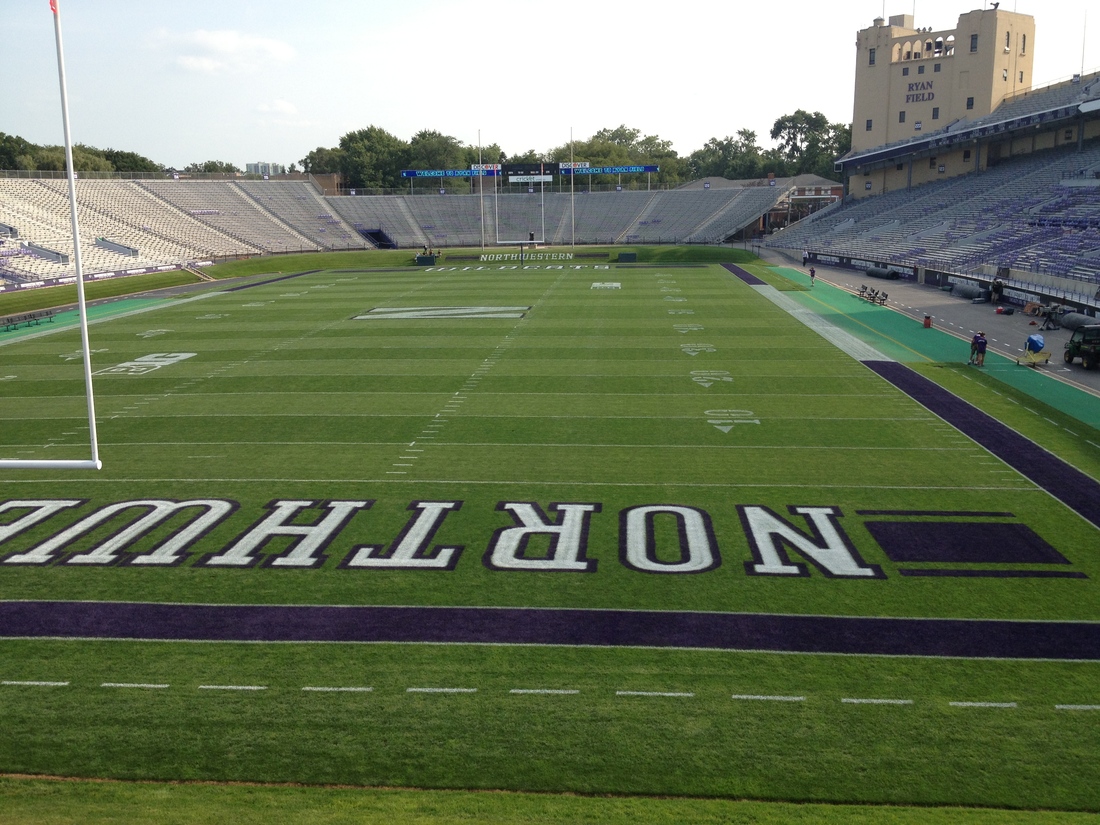 "In the end, it's worth the neverending, uphill fight. This is a small, elite school, with a small alumni base — the city of Chicago, which sits on the skyline to the South, houses more alums of every other Big Ten school than it houses Northwestern grads (which doesn't stop either NU from calling itself "Chicago's Big Ten school" or fans of other school from mocking that slogan) — and minimal room for physical growth that still plugs away. Why? Because sports are fun."

This Saturday offers an opportunity, by every definition of the word. Ohio State's visit gives the team a chance to prove its readiness. It gives its fan base a chance to prove its ability to fill its stadium without letting in a red horde. And really, it gives the program as a whole, from the team to the coach to the fans to the city to the facilities, a moment in the spotlight.

College GameDay is coming to town. On its face, GameDay is simply a preview show that does a modest job of previewing the day as a whole. But it has become so much more than that. It is college football's version of a pop culture event. It is a set of floodlights with more signs than a 1998 WCW Nitro taping. It is a national audition, a chance to prove yourself to the college football universe.

And you can prove yourself so much more if you win while the floodlights are shining. Northwestern has won seven games in a row since a late lead slipped away at Michigan last November. The Wildcats have alternated between incredible and stagnant play in 2013, but September was just a preparation for October 5. The students are in town now, as are Chris Fowler, Lee Corso, Kirk Herbstreit, and company. A win on Saturday night at Ryan Field would perhaps propel Fitzgerald's No. 16 Wildcats into the top 10, a land they haven't inhabited since Fitzgerald was an NU linebacker in 1996.

So … can Northwestern actually win? That depends on whether the Wildcats' 10-quarter stagnation was premised on flaws or boredom.

Against Syracuse on September 7, Northwestern played a nearly perfect half of football. Syracuse isn't an amazing team this season, but you'd have thought that Northwestern was actually playing Slippery Rock that day. The Wildcats outgained the Orange by a 387-154 margin in the first 30 minutes, scoring 34 points, putting points up on six of seven possessions, completing 24 of 26 passes from their two-QB arrangement, picking off SU quarterback Drew Allen twice, converting five of eight third downs, building a 27-point lead, and, generally speaking, dominating in almost every conceivable way.

The first half against Syracuse was an incredible statement. But in the second half, the Wildcats were outscored, 20-14. Then an absolutely horrendous Western Michigan team came to Evanston and held the lead late in the first half before Northwestern pulled away. Then Maine came to town, trailed by just 14 points heading into the fourth quarter, and actually outgained the Wildcats, 379-373, for the game as a whole.

As inspiring as that one half may have been, the ensuing five halves have been equally unimpressive. Consequently, the advanced stats don't think much of Northwestern at the moment. The Wildcats rank just 47th in the F/+ ratings (Ohio State's 15th), 44th in Off. S&P+ and 52nd in Def. S&P+ (OSU's 24th in both). While the Syracuse game gave us a hint of Northwestern's ceiling, the rest of the season has shown us that the ceiling doesn't equal "median."

Ohio State-Northwestern
Biggest game in Wildcats history?
Can Ohio State stop both QBs?
Washington-Stanford
Beware the Cardinal D
What we learned about Stanford
Arizona State-Notre Dame
What's wrong with the Irish?
ASU podcast with star RB
TCU-Oklahoma
A defense the Frogs can score on?
Sooners O has a tough test

A quarterback platoon that works

The Wildcats are unique in the way they bring two completely distinct offenses to the table.

Against Syracuse, Kain Colter took 49 snaps as Northwestern's quarterback and Trevor Siemian took 33. With Colter, NU runs something of a power spread, one that is three-quarters shotgun and one-quarter pistol, with three wide and a tight end on the line (or an extra blocker in the backfield) most of the time. In 24 called pass plays against the Orange, Colter ended up scrambling for positive ground six times for 75 yards (and took three sacks) and threw mostly quick-read passes: 12 of 18 passes were thrown within six yards of the line of scrimmage.

The Colter offense is one based on efficiency and horizontal lines. The Siemian offense goes vertical. It is about 10 percent pistol and 90 percent shotgun, and while play calls are about 50-50 run-pass with Colter (which Colter makes about 60-40 with his scrambling), it's about 40-60 with Siemian. And when Siemian passes, he's looking downfield. Against Syracuse, only eight of his 19 passes (42 percent) were thrown within six yards of the line, and nine (47 percent) went at least 10 yards in the air. He was a ridiculous 7-for-9 for 195 yards on these passes versus Syracuse (4-for-6 for 136 to Christian Jones and Tony Jones).

This all happened, by the way, without star running back Venric Mark, who has missed three games with a leg injury. Mark is expected to play on Saturday.

The Syracuse game was a look at Northwestern's utopia, a world without passing downs (only three of Siemian's 33 snaps came on second- or third-and-long; the Wildcats were playing too well to ever fall behind schedule). But their options become limited on passing downs, when Colter's horizontal act doesn't cut it and Siemian's aggressiveness fails to pay off in the face of either blitzes or a thick cloud of defensive backs.

Really, passing downs are the story on both sides of the ball. Ohio State has thrived on them (Passing Downs S&P rank: seventh on offense, 13th on defense; granted, different OSU quarterbacks have produced different results), and Northwestern has not (81st on offense, 54th on defense). Opponents have attempted nearly twice as many passes as Northwestern, but the Wildcats have as many sacks (seven) as they've allowed, which is an indictment of both the offense and defense, really. But Northwestern's leverage rate -- the ratio of standard downs to total plays -- will probably tell you everything you need to know about how effectively the Wildcats are moving the ball. Well, that, and the Colter-Siemian snap count. The more must-pass situations Northwestern is in, the more likely snaps for Siemian.

A work in progress

In terms of both scoring points and minimizing the "Will they put Kenny Guiton in?" rumble, Ohio State quarterback Braxton Miller did just enough last Saturday. In his first start since suffering a knee injury in the second game of the season, Miller produced numbers that we were perfectly decent -- 7.1 yards per pass attempt (including sacks), 4.6 yards per non-sack carry -- but he did enough early damage that Ohio State was playing with a lead for most of the game.

It would behoove Ohio State to get ahead early again, for any number of reasons. First of all, when you've got an intense atmosphere and a home team going for a big upset, taking both the crowd and the underdog out of the game early is generally a good way to go about life. Plus, again, placing Northwestern into must-pass situations limits the Wildcats' multiple dimensions to a more manageable one.

Beyond that, however, Miller's propensity for negative plays (mostly sacks) when behind schedule stands out a lot more when Ohio State isn't leading. Last season, Ohio State ranked eighth in Standard Downs S&P+ but 49th in Passing Downs S&P+, a problem similar to what both Northwestern units are facing this year. When Miller was hurt, Guiton proved himself a playmaker and, potentially, a better passer than Miller, even though the coaches kept the leash a bit tighter.

Last week, however, while the Buckeyes' passing downs efficiency was a bit lacking overall, Miller's performance on such downs was encouraging: 6-for-9 passing for 77 yards and no sacks.

Again, Northwestern's pass rush has been rather iffy this season; Tyler Scott and Dean Lowry have combined for five sacks, but the rest of the team has just two. Miller has always had a problem taking sacks, and if the Wildcats can get pressure on him, they can do some damage. But if they are allowing Miller to pass efficiently, the Ohio State running game will eventually roll.

An appearance from GameDay is an event for an upstart like Northwestern. By late-Saturday night, the Wildcats will have proven themselves one way or another. For the second straight week, Ohio State is about a touchdown favorite, and while the numbers don't love the Buckeyes, that sounds about right.