GIF: Did Texas fumble this ball away to Iowa State?

Texas took a 31-30 lead in Ames with seconds left, two plays after appearing to cough the ball up to Iowa State.

Share All sharing options for: GIF: Did Texas fumble this ball away to Iowa State?

This appears to be a strip of Texas running back Johnathan Gray at the goal line by Iowa State linebacker Jeremiah George. Big 12 officials reviewed the play and determined there was not enough evidence to overturn the call, which was that Gray was down before the ball came out.

You be the judge. ESPN's cameras turned up about three different angles, none of which showed with 100 percent certainty that the ball came out, but it appeared most impartial observers agreed there was enough evidence to overturn the ruling. Looks out to me. It's very close, though.

A still of the moment juuust before Gray's knee is down: 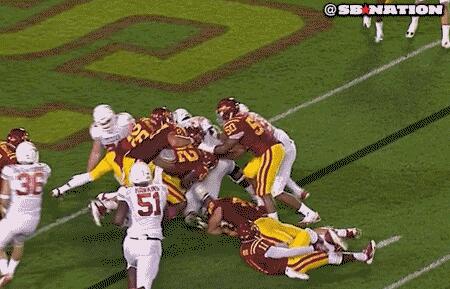 Gray more clearly fumbled the ball on the play after his apparent fumble, but was able to recover it just shy of the goal line before a Cyclone could scoop it up. Case McCoy plowed ahead for a touchdown on a sneak to close the drive -- that play was reviewed as well, of course.