Florida State is a huge favorite over Miami for a reason

Miami might be able to move the ball on the ground against Florida State, but the Hurricanes simply have no margin for error in this battle of top-10 teams.

Share All sharing options for: Florida State is a huge favorite over Miami for a reason

Miami-Florida State comes with its own hype. This is one of modern college football's helmet games: watch these two do battle and recall the incredible battles, and incredible talent, of previous decades. The natural hype is raised when both teams are in the top 10.

This is the first time the Miami-FSU game features two top-10 teams since 2004, when host Miami held off the Seminoles by a 16-10 margin. The teams are 14-0, and the game is receiving all the attempted hype that Florida State-Clemson did a few weeks ago. But the result is probably going to be pretty similar to FSU-Clemson as well.

Here are five things you need to know about FSU-Miami.

1. You can run the ball a little on Florida State

Defensive coordinator Jeremy Pruitt's first Florida State defense has been a python against the pass, forgoing an aggressive pass rush and simply squeezing the life out of your aerial attack. The Seminoles guard you tightly, swarm to the ball, and hit you as much as is legally allowed. But the run defense hasn't completely rounded into form yet. It's certainly not a weakness, but it's not a strength.

The Seminoles suffered some slow starts early in the season, and when opponents like Pittsburgh, Nevada, and Boston College were (briefly) building early leads, they were finding some success on the ground. On early scoring drives by those three teams, FSU allowed 5.5 yards per carry. The run hasn't yet worked for a full game, but there is sometimes room to roam off tackle. And if Miami is going to pull off the upset here, Duke Johnson better take advantage of whatever space he is given.

The sophomore from Miami Norland high school has been outstanding as a featured back in 2013; he follows blocks better than a lot of home run hitters, but he still possesses home run capability. There is a tremendous drop-off in quality between Johnson and his backups, but if Johnson can find space on a few possessions and get that rushing yardage total up over 100 yards, the Hurricanes might be able to find some room for the passing game. 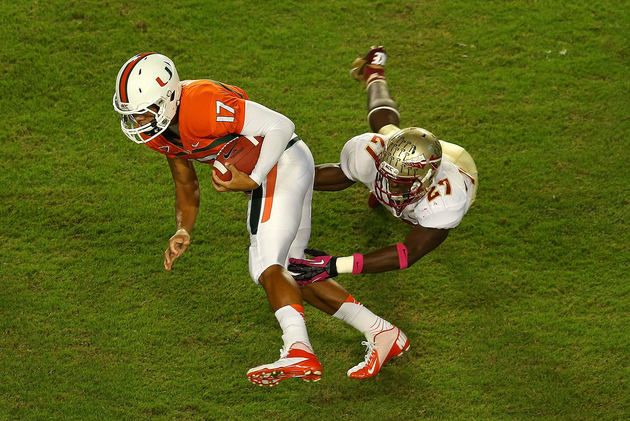 When Miami has the ball…

Stephen Morris situational stats:
Miami's line holds a potential advantage here, but FSU's defensive line has improved quite a bit from September to October. Duke Johnson's highlight potential could bail Miami out, but how many times? And can Miami strike enough early to account for some sketchy second-half passing from Stephen Morris?

When FSU has the ball…

FSU passing-downs targets:
FSU rarely falls behind schedule and bails itself out with big plays when it does. Miami, meanwhile, has a bad passing downs defense despite a solid pass rush. This is not a good combination.

2. Allen Hurns might be the most important player in the game

As vital as it is for Johnson to find some success, Miami is going to fall behind schedule sometimes. It's what FSU opponents do. The Florida State defense is just too good on standard downs. And if the Hurricanes are going to keep up on the scoreboard, they will have to figure out ways to at least occasionally convert on second- or third-and-long.

Allen Hurns has basically been the entire Miami offense on passing downs this year. He has caught a rather incredible 16 of 22 passes for 324 yards on such downs; the injured Phillip Dorsett is second on the team in passing-downs targets with 12, and he only caught four of those 12 passes.

Quarterback Stephen Morris has thrown eight interceptions in 157 pass attempts. That's an interception rate of 5.1 percent; anything over about three percent is pretty costly. Some of that has been a bit unlucky (on average, a defense picks off about one pass for every four broken up; for Miami opponents, it's been basically one for every 1.5), but a lot has simply been Morris making poor decisions or throwing into tight windows of space. Morris takes chances, and those chances are going to have to pay off. Hurns, who was dinged up with a hip pointer against Wake Forest, is the likely target of these risky passes, and he must come down with some of them.

(One other player to watch on passing downs: Stacy Coley. The freshman is seeing more time in Dorsett's absence and has caught six of nine passes for 119 yards on passing downs.)

3. Bend-don't-break probably isn't going to cut it against Jameis Winston

Especially if it's not really bend-don't-break. The advanced stats paint a confusing picture of Miami's defense right now. The Hurricanes rank 75th in per-play defensive efficiency but are a much healthier 30th in drive efficiency. Per drive, there is a 1.7-point difference between what Miami is expected to allow (based on field position) and what the Hurricanes actually allow. That suggests a team that is willing to give up yardage before stiffening in the red zone. Only, Miami allows a lot of big plays and stinks on passing downs.

So how are the Hurricanes making stops? Smoke and mirrors, it seems. First of all, their schedule has been mostly bereft of opponents with good offenses. (Generally speaking, their schedule strength is about to change drastically.) Of the seven teams Miami has played, one was Savannah State (the worst of the worst when it comes to FCS competition) and four rank 91st or worse in Off. F/+ (Wake Forest is 91st, Florida 94th, Florida Atlantic 101st, and South Florida 118th). Georgia Tech and UNC both have top-25 units, but those two teams combined to gain 901 yards (5.6 per play) and score 53 points; the only reason they didn't score more was because they turned the ball over five times.

Turnovers have been huge for Miami, and not necessarily in a sustainable way. While Miami's offense has been rather unlucky in the interceptions department, Miami's defense has been almost equally lucky, picking off six of 16 defensed passes and recovering seven of 11 fumbles. Florida State is getting only about 3.7 passes defensed per game and has fumbled only five times all year. Miami's opportunities to force turnovers might be limited, and without them, I don't know how the Hurricanes stop Winston and company.

4. Miami better get to Winston

Though the sack rate has improved in recent weeks, Florida State will still allow you to get to Jameis Winston sometimes. Florida State ranks just 54th in Adjusted Sack Rate (Miami's defense: 20th), and Miami is good at attacking from a lot of different angles. The Hurricanes have nobody with more than three sacks, but 12 Hurricanes have at least one.

Winston has taken fewer sacks in recent weeks -- he was brought down four times in 64 pass attempts against Clemson and NC State, and three of these came when FSU was up big -- but he can still be brought down sometimes. Miami better be able to harass him without relying too heavily on blitzes, because if the redshirt freshman is allowed to sit back and distribute the ball comfortably, hope is lost.

Winston shares the backfield with a fantastic, underrated back in Devonta Freeman (who, like Duke Johnson, combines both quality block-following and strong explosiveness; his backup, Karlos Williams, creates fewer opportunities but takes them further).

But more importantly, he's got Rashad Greene lining up wide. Greene is one of the nation's best receivers in 2013; he averages 15.8 yards per target on standard downs and 10.7 on passing downs. Focus too much attention on Greene, and Winston will punish you by getting Kelvin Benjamin, Kenny Shaw, and Nick O'Leary more involved. Winston has shown great maturity in his reads, taking what the defense gives him.

Miami's secondary is relatively passive and conservative on passing downs. That's probably going to cost the Hurricanes. You have to make plays and muddy the waters to stop the Seminoles; otherwise this simple, devastating offense will destroy you with its talent advantage.

5. Miami just has no margin for error

I like to play "Count the ifs" sometimes. It's a good way of figuring out how optimistic you have to be for your team to have a chance in a given game or season. For Miami, the ifs are revealing.

...then the Hurricanes can pull off the win. That's five ifs. For Florida State, the list is basically "If FSU plays like it has thus far in 2013..." and that's pretty much it.

Florida State is a heavy favorite for a reason. The job Miami head coach Al Golden has done in maneuvering the program past the spectre of sanctions is impressive. But the Hurricanes just aren't on FSU's level, at least not yet.

Miami deserves credit for figuring out how to win ugly, but unlike teams like 2012 Florida, the Hurricanes aren't doing it on purpose. There's a difference between winning low-scoring, low-margin-for-error games with defense and special teams and barely surviving junky, sloppy games versus North Carolina and Wake Forest. Miami doesn't want to play junk ball, but it has had to do so; junk ball isn't going to work against the Florida State team we've seen so far this year.

Perhaps the most interesting element of this game, in fact, is what Miami holds in reserve for a potential rematch. There's a good chance that the Miami-Virginia Tech game on November 9 will decide the ACC Coastal division crown; if the host Hurricanes win that one, they should get to face FSU again in the ACC title game. What can Miami learn this time that might help the Hurricanes pull off an upset the next time? Because this time probably isn't going to work out very well.

• Why Florida State would be favored to beat Oregon

• The Alphabetical, Week 9, by Spencer Hall