Washington at Stanford preview: Huskies have a golden opportunity to prove it

Washington was just too young to do serious damage last season, but youth turns into experience, and in 2013, the Huskies have turned into a formidable, well-rounded squad. How formidable? We'll find out Saturday night.

Share All sharing options for: Washington at Stanford preview: Huskies have a golden opportunity to prove it

It could always be worse. That's the lesson Washington fans learned repeatedly over the course of about 25 years.

After a long slide of new lows, Steve Sarkisian took over and offered stability, almost TOO much stability. Just two years after Willingham went 0-12 in 2008, Sark had the Huskies back to 7-6. And two years later, he still had them at 7-6.

It wasn't difficult to find impatience within the Washington fan base following the Huskies' third consecutive seven-win finish last year, especially after tight, frustrating losses to both Washington State and (to a lesser degree) Boise State. Washington had become the utter definition of "average." But first of all, average is better than awful; and more importantly, there was reason for both hope and confidence heading into 2013. The 2012 season may have seemed like a continuation of perfect mediocrity, but it was really a reset. The Huskies were too young to succeed, but youth turns into experience.

The main problem in 2012 was youth -- Washington simply had too much of it. The top two running backs were a sophomore and a freshman. The top six receiving targets were four sophomores and two freshmen. Of the eight offensive linemen with starting experience, six were sophomores and two were freshmen. The top three tacklers on the line were sophomores. The top three linebackers were a sophomore and two freshmen. A freshman cornerback was one of the key defensive cogs. Not only was the senior class of little help, but the junior class was almost nonexistent.

Washington basically fit the young-team-with-upside profile last year, playing at a pretty high median level but suffering random, crippling glitches along the way. Thus far in 2013, we've gotten the highs without nearly as many lows. Washington laid the hammer down in the second half against a still-salty Boise State team, held off an improved Illinois team in Chicago, totaled a cupcake in Idaho State, and methodically squeezed the life out of a solid Arizona squad to open Pac-12 play. The Huskies not only stand at 4-0 and 15th in the AP polls, but unlike other undefeated upstarts, the computers like them even more. At No. 7 in the F/+ rankings, Washington currently stands ahead of No. 8 Florida State, No. 9 Georgia, and No. 10 Oklahoma, among others.

Obviously computer ratings are going to be pretty volatile one-third of the way through the season. For all we know, the No. 7 ranking is a mirage that will fade away; after all, Arizona is No. 12 and certainly didn't look the part last weekend. But in comparing last season's weaknesses to this season's output, it isn't difficult to conclude that the Huskies might be here to stay, if not as a top-10 team, then at least as a top-15 or -20 squad.

To gauge Washington's overall progress, let's take a look at how the Huskies have (or have not) shored up last year's primary weaknesses.

The level at which quarterback Keith Price performed at the end of the 2011 season made him a darkhorse Heisman candidate heading into the 2012 campaign. That hype vanished pretty quickly.

Playing quarterback is really, really hard. We forget this sometimes. The number of reads a quarterback has to make before the snap, the number of progressions he sometimes has to go through in just a couple of seconds, the ability to go through those reads as big bodies fly around at him and threaten to separate him from the ball … there's a lot going on at the position. And for Price in 2012, there was too much going on. A new offensive coordinator and relatively new philosophy led to Price looking like a deer in headlights at times; his instincts abandoned him as he tried to flee the pocket less, and in an offense built more around quick passing and quicker reads, Price was lost. His sack rate on standard downs was nearly 10 percent, and that should never happen even with a young, constantly shuffled line.

Ohio State-Northwestern
Biggest game in Wildcats history...
... but can they win?
Washington-Stanford
Beware the Cardinal D
What we learned about Stanford
Arizona State-Notre Dame
What's wrong with the Irish?
ASU podcast with star RB
TCU-Oklahoma
The Blake Bell element
A defense the Frogs can score on?

This year, with an extra year in the new system and a healthier, more experienced line in front of him? Things have improved, to say the least.

Price is running more frequently (3.5 times per game to last year's 2.5) and less effectively (4.6 yards per carry to last year's 6.3), but there has been significant improvement in 2013, and not just of the "the schedule hasn't been as tough yet" variety. Price just LOOKS so much more confident and under control this year.

Every time Illinois threatened to come back on the Huskies at Soldier Field in September, the Illini would try to dial up the pressure and make a big defensive stand. Price had the perfect counter-punch nearly every single time. On what was basically the game-clinching field goal drive, Price completed five of six passes for 83 yards.

From my 2013 Washington preview:

[T]he emphasis on quick reads and passing potentially took opportunities away from a running game that was much better than expected. Between a season-opening injury to starter Jesse Callier and a line that had to replace all-conference tackle Senio Kelemete (and would be forced to do a ton of shuffling in 2012), it was easy to assume that Washington might struggle to move the ball on the ground. And hell, with a running back corps that was basically sophomore Bishop Sankey and a bunch of freshmen, it's possible that Washington called more pass plays because it didn't have a choice. (And yes, it should also be mentioned that a lot of Washington's packaged option plays include both a run and pass option.)

Regardless, Washington was actually quite proficient on the ground. The Huskies improved from 52nd to 33rd in Rushing S&P+ and from 34th to sixth in Adj. Line Yards. Sankey was not a particularly explosive option, but with the blocking he received, he didn't need to be.

Strength did not match system in 2012. Washington was a solid rushing team and a pretty awful passing team but passed more frequently than the national average, especially on standard downs. Through five games in 2013, that has changed drastically. The Huskies are rushing 67 percent of the time on standard downs (22nd in the country) and 45 percent on passing downs (15th).

Bishop Sankey's average rushing line is 26 carries for 152 yards and a touchdown. Backups Jesse Callier and redshirt freshman Dwayne Washington are tossing in 13 carries and 70 yards per game. After averaging 36 pass attempts per game in 2012, Price is averaging just 29. (Yes, that includes the Idaho State game, in which he threw only 21 times.) Washington is averaging nearly 84 plays per game and one play for every 21.6 seconds. They are wearing opponents down with a lovely run game.

They're doing everything they could potentially have gotten away with doing last year, too, in other words. Sankey softens defenses up with consistent gains and decent explosiveness, and it opens all other weapons up as well. System and strength are one this year.

2012 weakness No. 3: A mediocre defensive front

After a disastrous finish to the 2011 season, former Boise State and Tennessee defensive coordinator Justin Wilcox was brought in to install a new defense and shore up a pretty awful front. In 2012, the defensive line improved to mediocre … but was still only mediocre. Washington ranked just 70th in Adj. Line Yards and 63rd in Adj. Sack Rate. The Huskies were able to get after the quarterback on passing downs but weren't able to do much damage in run-healthy situations: 88th in standard downs line yards per carry, 100th in Power Success Rate, and, worst of all, 118th in Stuff Rate (percentage of runs stopped in the backfield).

Have the Huskies improved much in this regard? Not really, no. At least, not yet. They rank 91st in Line Yards per carry (not yet adjusted for opponent), 103rd in Power Success Rate, and 109th in Stuff Rate. They can still get after the passer in passing situations (16th in Passing Downs Sack Rate, with ends Hau'oli Kikaha and Josh Shirley combining for six sacks), and the linebackers are still between good and outstanding: Washington ranks 24th in Rushing S&P+ despite iffy line stats. There is not enough of a presence behind the line (Washington has only five non-sack tackles for loss), but strong overall team speed is minimizing damage.

Despite line issues, Washington ranked a healthy 24th overall in Success Rate+ (efficiency) but ranked just 45th in PPP+ (big-play prevention). This discrepancy was even larger against the pass: 14th in Passing Success Rate+, 52nd in Passing PPP+.

Despite the loss of star cornerback Desmond Trufant, and despite the move of Shaq Thompson from safety to linebacker, there was reason to believe that the secondary was still going to be strong in 2013. To say the least, that line of thinking has been justified thus far. Washington ranks third in Passing S&P+, behind only Florida and Virginia, and the raw stats can give us a pretty good idea for why they rank that high:

This isn't a murderer's row of pass offenses, no. But considering anything below about 6-7 yards per attempt is pretty poor, and considering that these three quarterbacks couldn't even average 4.0 yards combined, it's safe to say that Washington is performing at an incredibly high level in pass defense right now.

More importantly, the big plays have been either minimal or non-existent. Denker and Southwick combined to complete one pass longer than 16 yards. Granted, Illinois had some success in this regard a couple of times (a 72-yarder to Ryan Lankford, a 35-yarder to Matt LaCosse on a trick play), but for the season as a whole, things are looking up in this regard. 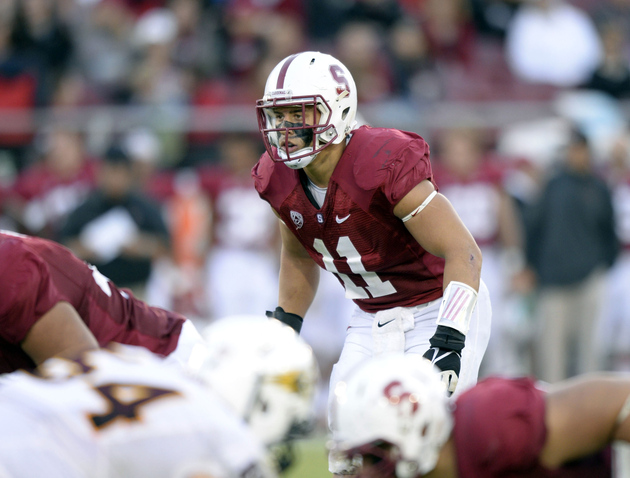 In all, Washington seems to have shored up three of its four primary issues from last season. And the Huskies have made it through one-third of their season without laying an egg, as they did a few times in 2012. As you always hope will happen, last year's predictable bumps have become this year's strength.

But now here comes Stanford to challenge every single ounce of growth.

Your quarterback is taking fewer sacks and making better reads? Good for him; Stanford has one of the scariest front sevens in college football and knows how to use it. Price passed the Stanford test last season -- his performance in an upset of the Cardinal was perhaps his steadiest of the season -- but doing so twice isn't in any way a given.

This is a perfect progress check for Washington at this point. I don't think there is any doubt that this is a top-20 team at this point, but the Huskies will let us know just how seriously we need to be taking them on Saturday night. Bishop Sankey could find (or create) room to run, Keith Price could once again make the right passes against the Cardinal, Husky linebackers could prevent Stanford from gashing them on the ground (despite line weakness), and the secondary is the best Montgomery and Cajuste have faced so far. They could be up for the challenge, but even if they aren't, that just means they aren't elite. They could still be damn good.