A formerly suspended Ohio State running back starred in Evanston, powering the No. 4 Buckeyes through a 10-point deficit on the road.

Share All sharing options for: Without Carlos Hyde's comeback, there's no Ohio State comeback vs. Northwestern

Urban Meyer couldn't have asked for a better kind of ugly. The bungled fake punt, the shaky secondary, even the early red zone stutters that "almost" led to him benching starting quarterback Braxton Miller in favor of Kenny Guiton. Because once redeemed power back Carlos Hyde helped hammer shut a late 40-30 comeback win over Northwestern, Ohio State landed at the halfway point of the season undefeated and entering a bye.

"Obviously a lot of things to work on, but this was a win over a top-20 team on the road, and in this environment," an upbeat Meyer said.

And as long as you win, the undefeated Big Ten favorite's flaws are just "things that need some work," to use Meyer's words.

1. The Buckeyes' banged-up passing defense was weak. Northwestern's quarterback tandem of Kain Colter and Trevor Siemian finished 25 of 31 for 343 yards and two touchdowns. Over-aggressive Buckeye defenders were burned in man coverage. Seven times the Wildcats drove inside the Buckeyes' 35-yard line, but Northwestern's 5-of-14 third down conversion rate created field goals instead of touchdowns, allowing OSU's deficit to never grow past 10.

"That was our plan going in, to focus on third down most of all. We knew that's where we would be able to stop them," defensive lineman Joey Bosa said after the game.

2. Braxton Miller didn't end the quarterback debate. His two fumbles -- one on a bungled read option deep in Ohio State territory that set up Northwestern's first TD, the other on a designed run just six yards from a touchdown -- created a 14-point swing against the Buckeyes. He was a nondescript 15 of 26 passing with one interception, and he didn't make a real statement until the go-ahead scoring drive. Finally combining athleticism with accuracy, Miller scrambled out of a sack to throw to an open Corey Brown on a 38-yard completion in the fourth quarter. 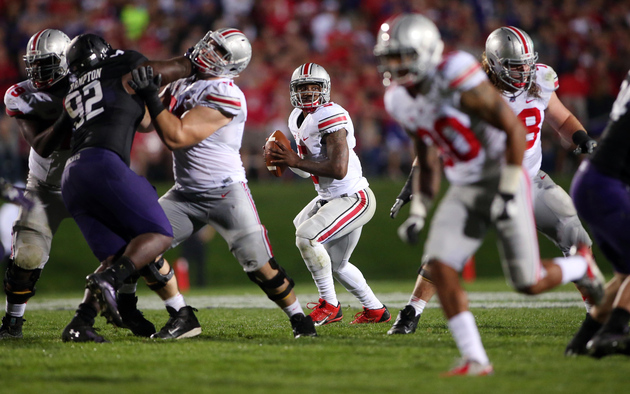 "One of the things that has frustrated me about Ohio State the last several years was that no matter how good the OSU playmakers were, the offensive line, for whatever reason, was subpar. That seems to be a thing of the past. I can't remember the last time the o-line was so good in both phases, and it was the main reason that Ohio State was able to stage a comeback win."

It was the kind of play unique to Miller's skillset that ultimately set up the winning score, but it came after three quarters of lackluster work. Meyer admitted after the game he considered putting in Guiton, but pulled back at the last second.

"You know, we were riding him, riding it out. It just didn't feel right," Meyer said.

3. The Buckeye offense lacked a cohesive identity. In six first-half drives, Ohio State's offense yielded two field goals despite succeeding in both scheme and tempo. Often the Buckeyes would tear down the field on consecutive deep passes from Miller or inside runs from Hyde only to burn out in the redzone from overly cute play-calling.

"The head coach and the offense really put the defense in some bad positions tonight," Meyer said.

And the fake punt. Meyer said that the decision to run punter Cameron Johnston on a 4th and 3 from the Buckeyes' own 32 was a move to "swing momentum" after Northwestern took a 17-13 lead.

"But, you know what? That's who we are. I told our players, we're going to run that fake punt again. We're an aggressive team and we'll do what we have to do to win games," Meyer said.

Run me more. I'm made for that.

Where Ohio State found itself was on the back of Hyde, who averaged 6.5 yards a carry on a 168-yard, three-touchdown night. Where Miller's passing was either erratic or under pressure, Northwestern could do little to answer the Buckeyes' superior physicality, embodied by Hyde's head-on running in the fourth quarter (55 yards, 14 points).

"I told 'em on the sidelines, run me more. I'm made for that," Hyde said after the game. "After a while it just felt like we wore them down." 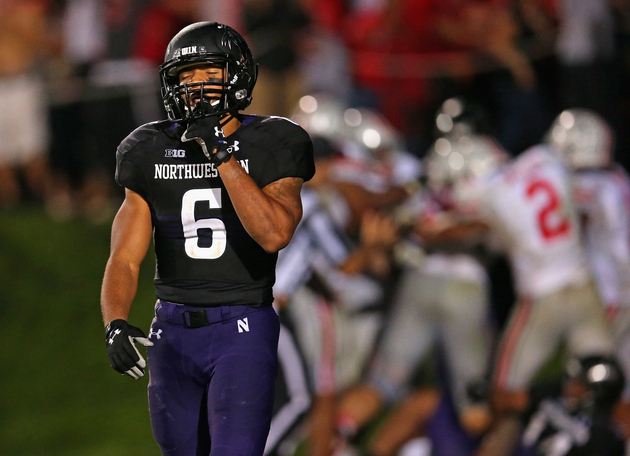 Hyde's night -- specifically Ohio State's discovery that their physical inside running could dictate a game's pace even in comeback mode -- might've been the best part of the win. That, and the once-suspended Hyde's emotional postgame press conference. When asked how he'd feel tomorrow after reflecting on the game, Hyde paused for over a minute, choking up on an admission of fault, of fighting to get back in coaches' good graces and his love of his teammates.

"Now, I'm gonna rest these guys," Meyer said after. "We're gonna be the most rested team in the history of college football."

And so, Meyer's team gets to reenter conference play against Iowa in two weeks with the knowledge they're still a work in progress, but without the ugly loss to prove it and with BCS title hopes firmly intact.