The Bears put up a historic offensive output against West Virginia Saturday night, so let's re-live it.

Share All sharing options for: Baylor vs. West Virginia video highlights: reliving the slaughter in Waco

The Baylor Bears absolutely mauled West Virginia Saturday night, scoring 56 points and putting up over 600 yards in a record-setting first half before setting school records with 73 points and 864 yards of total offense in the 73-42 win.

Baylor started the scoring with a 61-yard touchdown pass from Bryce Petty to Antwan Goodley.

West Virginia tied it up on a botched punt, and it seemed like it could be a ball game. Art Briles disagreed.

Best quote from yesterday: Art Briles, when asked about WVU tying the game at seven early. "That was of no concern."

The Bears soon took the lead on a two-yard run by Petty. Petty then connected with Tevin Reese for a 47-yard touchdown on this phenomenal catch.

Less than two minutes later, the Bears struck again, as Lache Seastrunk went 80 yards to the house for a huge touchdown run.

and likely still dancing, until the end of time.

All of this took place in an incredible first quarter for Baylor, which was one of the best in recent history.

Baylor: 369 yards in the first quarter... that's the most by any team in a single quarter over the last 10 seasons.

Glasco Martin opened up the second quarter with back-to-back two-yard runs for the Bears, giving them a 42-7 lead, and after a West Virginia touchdown brought it a bit closer, Seastrunk did his thing again.

The Bears would score one more touchdown in the half, giving them a 56-14 lead heading into the locker room.

With the starters out due to the blowout nature of the game, Shock Linwood showed he could replace Seastrunk quite well with this impressive 55-yard run late in the third quarter.

Here was Baylor's ridiculous drive chart for the game: 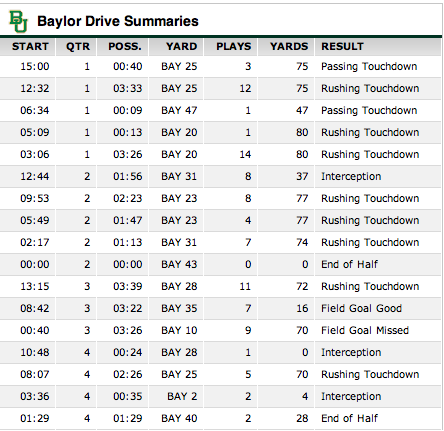 The Bears' offense continued to dominate in the second half, scoring 17 points and finishing with some record-breaking totals.

With 73 points and 872 yards of total offense, the following records were set:

Against FBS opponents, Baylor ranks No. 1 in both passing and rushing yardage.

Still no three and outs for the @BUFootball offense this season. I wonder what the record is for games without one in a season?