The Top Whatever, Week 12: Alabama wants Alabama, and that's fine

Ranking this week's nine-ish teams still of concern at the national level. But it's probably more like 10, once we account for the other Alabama.

Share All sharing options for: The Top Whatever, Week 12: Alabama wants Alabama, and that's fine

At one point during the fourth quarter of the 38-17 win over LSU, Alabama fans were shouting, "we want Bama." It may be the only option at this point. After beating LSU and with only Auburn sitting on the horizon, the only real obstacle for Alabama may be Alabama itself.

This does not mean "Alabama can only stop themselves with mistakes Alabama makes." No, this posits the existence of another Alabama, an anti-Alabama, one made of dark matter that must theoretically exist under certain physical models. If that one shows up and even so much as touches our Alabama, the world as we know it will end. It will, however, be the only feasible chance at a competitive game for four quarters and thus may be worth it. (And think of the ratings.)

It was an amazing thing to keep a football program alive for 125 years, Wake Forest, but all things must come to an end, and a 59-3 loss to Florida State will have to be that for you.

FSU is now at the stage of ACC dominance where, in order to get through games, they measure out exactly as much effort and risk as needed, then hand the product to the opponent. The opponent then beats itself to death with it, since this is a more humane and noble fate than whatever Florida State would do in a real game situation. Wake did this brilliantly by throwing seven completions to its own players while cheerfully donating six to the Seminoles.

We'll miss you, Wake Forest, mostly for the time you won the ACC Championship with three field goals and a cloud of dust over Chan Gailey, paid football coach.

A 41-12 victory over Oklahoma is a bit cheaper than it used to be, thanks to Oklahoma's stunning offensive regression, but consider the bright spots in a pretty delightful historical spot for Baylor football:

Beat Oklahoma State in Stillwater, hope for a few stumbles by others along the way, and maybe we'll just think about the good things that can happen after all that instead of dwelling on the loss of wide receiver Tevin Reese. (Which matters a lot, even if Baylor's offense can be confused for a marauding machine that just happens to use individual and interchangeable humans as a vector for points, yardage, and jaw-dropping offensive daring.) 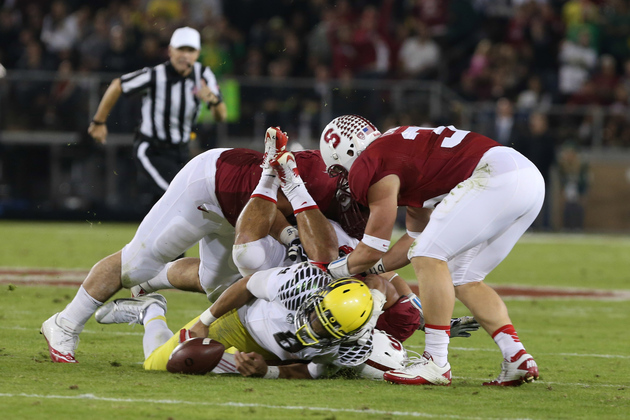 Just a bunch of mean, formerly fat middle-schoolers who never, ever forgot you teasing them about husky pants and being good at math. Well life's about a bit more than middle school, right? And sometimes that geeky caterpillar, you know, well he does eat his way into a cocoon where your words can't hurt him, and when he comes out he's a hang-cleaning, drive-blocking butterfly with a football scholarship. He's a giant, heavy butterfly, or like 17 of them on the line at once, all run-blocking you into a dark oblivion where even your neon yellow Nike uniforms can't be seen, Oregon.

Stanford only won by a margin of 26-20 in the end, but those six points could have been 60, really. When you literally make the opponent weep and drive every hope for the season into a condemned copper mine somewhere deep in the northern California wilderness, points are really beside the point.

FINE. There they are, with a remaining schedule of Indiana, Illinois, and Michigan. That is as putrid a slate of competition as Florida State's, and the opposite of what Baylor will have to run through in order to gain even a sliver of a shot at a BCS title opportunity.

Please allow Ohio State a permanent guest spot in each conference's schedule as kind of a roving stress tester. Thus you will help wash some of the Big Ten-ness off of them. 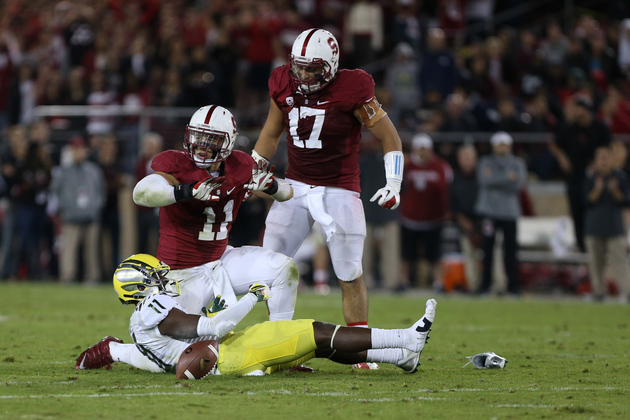 Spent the bye week standing in someone's way and refusing to move, because that's what Michigan State football does. Still sitting right in Ohio State's way, hypothetically speaking, and oh how hilarious it would be for Ohio State to stub its toe on a piece of the Jim Tressel coaching tree.

... has decided that passing is a dirty concept from the 20th century and is basically running the old Barry Switzer wishbone, but stretched equatorially. It's working, and that would be all that matters on any weekend, whether they happen to be deflating Tennessee 55-23 in Knoxville or going into an Iron Bowl matchup with Alabama that is far more interesting than it looked three months ago.

The Tigers are one of two SEC teams naively hoping to jackal an SEC title away from Alabama, but the opposite of hope is Florida football, and that isn't an option you want to explore.

Still quietly rolling along after a 48-17 win over Kentucky and keeping the schedule strength up with a nasty double of Ole Miss and Texas A&M to finish the year.

Quietly waiting in Stillwater for Baylor on the 23rd of November. Oh, and they beat Kansas 42-6 this weekend, which still counts as a football win thing at the FBS level! Unlike some teams -- say, Oregon -- the Cowboys could win their conference outright, without needing outside help.

Oregon, if only because they a.) have no larger aspirations provided Stanford wins out and gets the North's spot in the title game, and b.) because they looked so bad against Stanford. (Could bump back into first class, but not real likely at this point.) Fresno State because of that schedule and for rudely running into Wyoming's horse.