How do Fresno State and Northern Illinois compare to previous BCS-busters?

Fresno State and Northern Illinois do not measure up well to their predecessors (including 2012 NIU), Oregon doesn't really have a Stanford Problem, Gary Danielson references advanced stats, and Auburn looks awfully good against Tennessee.

Share All sharing options for: How do Fresno State and Northern Illinois compare to previous BCS-busters?

Perhaps it is poetic that in the last go-round for the BCS, in the final year before the College Football Playoff takes over the landscape, we're getting glimpses of each of the BCS' nightmare scenarios.

Funky computer rankings failing the eyeball test? Check. With a tough home stretch, one-loss Stanford, already ahead of Baylor, could conceivably creep ahead of undefeated Ohio State thanks to the computers.

Flawed mid-major threatening to steal a BCS bid? Check and check. Fresno State and Northern Illinois, each 9-0, currently sit at No. 14 and No. 15 in the BCS standings. Per BCS rules, a mid-major conference champion ranked in the top 12 of the final standings automatically gets a bid; if said champion is in the top-16 and ahead of a BCS conference champion, it also automatically qualifies, and, well, AAC leader UCF currently sits at No. 17.

Fresno State just passed what was supposed to be a stiff test at Wyoming with flying colors, and while NIU has an infinitely more difficult stretch approaching -- Wednesday night MACtion games against Ball State at home (this week) and Toledo on the road (next week) -- only one is going to get in regardless. If either Fresno or NIU finish undefeated, the odds are quite good that it will claim one of the final 10 BCS bowl bids of the BCS era. 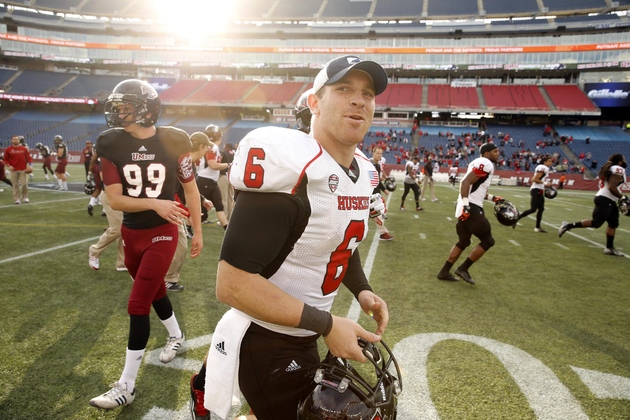 So how good are the Bulldogs and Huskies? Not very.

As with many real-world examples (prison sentencing, welfare, etc.), any time you write a catch-all rule with strange (and necessary) qualifiers, you run the risk of including some people/places/things you didn't intend to include.

College football's higher-ups attempted to give a boost to the Boise States of the world, installing process safeguards so that truly elite (or near-elite) mid-majors had a chance to play in a big bowl without getting passed over for that year's version of 2011 Michigan or Virginia Tech, a.k.a. less-deserving teams with big names and fanbases that allegedly travel better.

As a perpetual fan of the underdog, I appreciate an effort like this. Non-AQ teams claimed two spots in the F/+ top 10 each year from 2008-10 and three in the top 20 in 2011. Meanwhile, Virginia Tech (No. 24 in F/+) claimed an at-large bid over Boise State in 2011, and an incredibly mediocre UConn team, ranked lower than 16 mid-majors (including 7-6 FIU and 5-7 Houston), somehow earned the Big East's automatic bid and claimed a Fiesta Bowl bid in 2010. The rules come from a good place (even if they were prompted as much by anti-trust issues as anything else).

But in calibrating to protect a team like 2011 Boise State, however, the new rules opened the door for 2012 Northern Illinois and, now, 2013 Fresnorthern Illistate.

With Utah and TCU getting called up to major conferences (along with, technically, the former Conference USA members that joined the still-AQ American Athletic Conference), BYU going independent, and Boise State entering an apparent down cycle of sorts, the mid-major ranks currently aren't what they once were. The downward creep began in 2012 and has continued rather dramatically in 2013. There were only two non-AQ teams in the F/+ top 30 in 2012, and heading into this past week of action, there were only two in the top 40 in 2013. Neither were Fresno State or Northern Illinois. In fact, neither the Bulldogs nor Huskies were in the non-AQ top six. When the new F/+ rankings are unveiled tomorrow, the odds are very good that Fresno State will have moved up a few spots following a shellacking of Wyoming, but it will only be a few spots; the Bulldogs aren't going to suddenly rank in the top 30.

I defended last year's NIU team quite a bit, pointing out that for the season as a whole, the Huskies played at a level comparable to Louisville and mentioning that, while NIU was terribly outmatched by Florida State in the Orange Bowl, a) most teams are outmatched by FSU, and b) NIU was outmatched by quite a few MAC schools -- the Huskies' style of winning dealt far more with speed and leverage than size and strength. They were good at that style, and they trailed FSU by just a touchdown in the third quarter as a result before fading late.

But that was last year. In 2012, NIU had a top-40 offense and defense. The 2013 Huskies are 70th in Off. F/+ and 71st in Def. F/+ and, at 64th overall, ranked one spot below 1-6 Memphis in last week's F/+ rankings. In fact, we should probably focus on Fresno State here because I'm pretty confident in saying NIU won't finish undefeated. The odds of surviving Ball State and Toledo, then also getting past Buffalo (No. 74) or Bowling Green (No. 67) in the MAC Championship are low for a team with NIU's ratings.

Fresno State is at least fun. The Bulldogs have averaged at least 6.7 yards per play in four of their last five games and have run at least 84 plays in seven of nine contests overall. Quarterback Derek Carr is nearly Colt Brennan-esque; his current 14-game pace: 5,321 passing yards, 70 percent completion rate, 50 touchdown passes, and just six interceptions.

Those rooting against Fresno's or NIU's inclusion in a BCS bowl have a strange ally at the moment: Boise State.

Meanwhile, the Fresno defense can defend the pass pretty well (don't ask about the run defense) and is basically equipped to make just enough plays to survive a shootout. The Bulldogs have been handling their business in the Mountain West of late; after a September that saw them either blow or attempt to blow double-digit leads in four straight games (all eventual wins), they beat Idaho, UNLV, Nevada, and Wyoming by an average score of 47-15, and they survived a tight game at a rapidly improving San Diego State squad. They are improving. They probably won't improve enough to reach where NIU was in the rankings last year, but they could get reasonably close if they dominate New Mexico and a decent San Jose State team.

(Ironically, those rooting against Fresno's or NIU's inclusion in a BCS bowl have a strange ally at the moment. Boise State, which currently leads the MWC's Mountain division, narrowly lost at Fresno State in September, and could get a rematch with the Bulldogs in the MWC championship game, albeit without starting quarterback Joe Southwick.)

If Fresno State indeed snags a BCS bid, there is certainly a chance the Bulldogs land in an entertaining, and eventually unsuccessful, game against a team like Oregon. Tim DeRuyter's team won't get physically dominated like NIU did last year (or Hawaii did in 2007, or NIU would again in 2013), and even if Fresno is probably undeserving, what are we going to do about it? The BCS is almost done anyway, and at least the Bulldogs would put on a show for a while.

Five other thoughts from the weekend

It's funny how quickly the narrative shifts. Exactly 365 days ago, Stanford had an Oregon problem. The plodding, physical Cardinal couldn't figure out how to hold up against Oregon's speed and pace for 60 full minutes. Even with Andrew Luck at quarterback, Stanford had succumbed and fallen in dominant fashion the previous two years -- 52-31 in 2010 and 53-30 in 2011.

Now, after two plodding, physical Stanford wins, the narrative has flipped 180 degrees. Even with Marcus Mariota at quarterback, Oregon has succumbed and fallen to Stanford, albeit by less-than-dominant margins (nine total points in two games, in fact).

So now the narrative is Oregon's "Stanford problem," the Ducks' inability to cope with strong, physical play and grind-it-out run games. Alabama fans certainly had a lot of fun with this during GameDay on Saturday in Tuscaloosa.

How can Oregon compensate for such physicality? What adjustments must Oregon make? None. Play better. Don't blow scoring opportunities a few feet from the goal line, as Oregon did twice in the first half on Thursday night. Oregon's last two losses to Stanford were no more damning of its overall philosophy than Stanford's losses to Oregon were before that. Stanford was better on Thursday night and got a win because of it, but let's not overthink this.

When Alabama scored to up 38-17 on LSU, I flipped over to Notre Dame-Pittsburgh and eventually Fresno State-Wyoming instead. In doing so, I apparently missed CBS's incumbent SEC color commentator Gary Danielson referencing my "Adjusted Sack Rate" measure, referenced in Friday's Bama-LSU preview, late in the broadcast. Granted, he admitted that he hadn't heard of it until some production assistant told him about it earlier that day, and granted, he didn't really define it correctly (it's not only adjusted for pass attempts -- that's what regular sack rate is -- but also for opponent), but ... I see you, Uncle Gary!

Here's the thing about Auburn in 2013: for the most part, the Tigers have been good, not great. AU entered last week's Tennessee game with top-30 rankings across the board but still ranked just 22nd overall. (Their marquee win at Texas A&M was dampened a bit by the fact that F/+ justifiably hates A&M's defense.) On Saturday, though? Auburn played like a top-10 team.

At some point in the coming weeks, probably against Alabama (and maybe against Georgia), quarterback Nick Marshall is going to have to succeed at throwing the ball more than he has had to of late; in the last three weeks, Marshall has thrown just 16 passes because the run has been working so well. But against a Tennessee team that had scared Georgia and beaten South Carolina in its last two games in Knoxville, Auburn was bigger, stronger, and faster than the Vols. The Tigers rushed for 444 yards (Marshall had 221 not including a sack, Tre Mason had 117), harassed UT quarterback Joshua Dobbs, scored on a punt return, and turned a 13-6 Tennessee lead into a 55-23 romp.

Auburn's ability to win out (which would obviously include an Iron Bowl upset) will depend on its ability to avoid early holes and stick to its identity, but it's more likely than it was a few weeks ago, and it's always a good thing when a young team looks a little better and a little better each week.

@SBN_BillC covered him down here. Among the nicest people I’ve ever met.

The freshman from Fort Lauderdale didn't have a particularly impressive game in a tight loss to UCF -- 52 percent passing, one touchdown to two picks, three sacks, under five yards per pass attempt -- but he looks the part, he has put up some spectacular numbers for a freshman (23 touchdowns to six picks, at least a 64 percent completion rate in six of nine games), and he seems like a pretty disturbingly nice guy. My biggest complaint is simply that he's not Willy Korn's red-haired, Irish cousin.

The F/+ picks had a 62 percent success rate against the spread, Stanford indeed looked looked like a team with a 65-percent chance of beating Oregon (Numbers 1, Eyeballs 0), Kansas State was indeed better than Texas Tech, Baylor indeed whipped Oklahoma, USC played like a top-10 (or at least top-15) team for the second or third straight week, and Texas A&M's defense once again played like the No. 87 defense in the country. Our numbers aren't always right, obviously, but they had quite a solid week.