Pivotal games in the SEC, Big Ten, Big 12, Pac-12 and American all mark a loaded Week 12. Your guide to five days of college football, with good games on each night.

Note: For your convenience, we've removed games that have already happened. 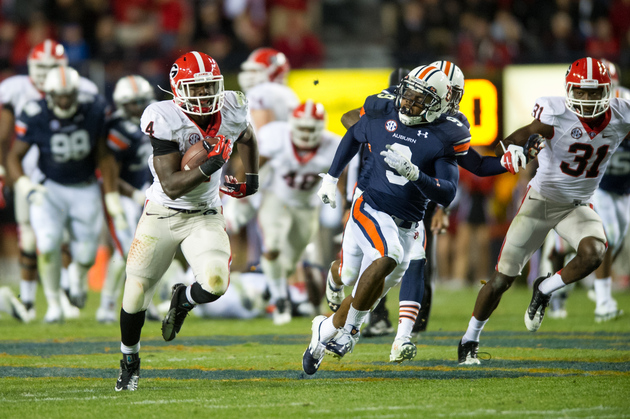 Best option: Indiana at No. 22 Wisconsin

This one could be an outright laugher, as Wisconsin's offense can pour it on good defenses, and Indiana's defense... is not good. But Indiana is the Big Ten's chaos team, and weird things can happen when you can score on anybody and stop nobody. Easily possible that this one approaches 100 total points.

Plan B: No. 3 Ohio State at Illinois

Don't expect a hard-fought game, but as of right now OSU is your third-place team in the BCS, so one stumble from Alabama or FSU (we're kind of expecting it more from the Tide, thanks to the schedule) and this is your second title team. For now. Ohio State knows how close it is and knows the importance of running up the score, so if you want to see Braxton Miller and company put on a show, go for it.

Keep it in mind: Cincinnati at Rutgers

No world-beaters at work here, but both teams are on track for bowl eligibility (Cincy's already 7-2, and Rutgers should find its way to the Pinstripe Bowl or so). At the very least the odds of a close game are way, way better than most of the early fare.

In case of emergency: Iowa State at No. 22 Oklahoma

This one's not quite for the Big 12 championship, as Baylor's still lighting people up, but it's at least for the right to challenge Baylor for the title; if whoever wins this game beats Baylor too, that team will take the Big 12 title and the berth in the Fiesta Bowl. Texas has been resurgent—and a little bit lucky—after firing Manny Diaz at defensive coordinator, and the Longhorns are still undefeated in Big 12 play. But this might be Mike Gundy's best Oklahoma State team yet, and this promises to be a dogfight.

The SEC's most disappointing team (behind Florida) heads west to face its most surprising team, and it promises to be a competitive affair with Auburn only favored by 3.5 points. Georgia's ranking is a bit unfair given how badly injuries have hampered that team, and it's getting healthy in time for the stretch run, but Auburn has looked legit all year long.

Keep it in mind: No. 16 Michigan State at Nebraska

This game is the de facto championship in the Big Ten Legends Division, with Michigan State at 5-0 in conference play and Nebraska at 4-1 (Minnesota's still technically alive with two conference losses, but won't be in the mix at the end). Nebraska's going to have an uphill battle with Taylor Martinez continuing to be out, but the game's in Lincoln.

In case of emergency: No. 23 Miami at Duke

Dude, Duke is 7-2. This one is in Durham. And the basketball team plays Friday night, so the students won't be too distracted by that to show up. It is completely plausible that Duke beats Miami in football and stays in contention for the division title.

Best option: No. 4 Stanford at USC

Stanford's riding high after choking out Oregon for 50 minutes, then hanging on for dear life for the win. A mystifying loss at Utah is the only blemish for the Cardinal, who have gobs of legit wins on their slate already, and who can blame them for still thinking big? A loss here, a loss there, and the resume might be championship-worthy once again. Stanford's got to get past USC first, which is 4-1 since jettisoning Lane Kiffin and looking pretty stellar, depth issues considered. This is not a gimme for Stanford.

Plan B: Texas Tech vs. No. 5 Baylor at AT&T Stadium, Arlington, TX

Both Texas Tech and Baylor were setting the world on fire in October, while earning caution from those rightly pointing out their soft schedules, and it was wise to wait until November to render a verdict on each. Well, it's November. Tech has wilted under the competition; Baylor, not so much. Still, there's potential for serious fireworks here as the two teams meet at Jerry World.

Keep it in mind: Houston at No. 20 Louisville

Above all else college football should be fun to watch, and Houston and Louisville going at it should be all sorts of fun. The two teams pass for an average of 640 yards per game (combined, mind you) and Houston QB John O'Korn—no really—is starting to round into form as a passer. This is still Teddy Bridgewater's world, of course, and Louisville getting the game at home doesn't hurt. But if you want to be entertained, this game should do it.

In case of emergency: No. 1 Alabama at Mississippi State

There's some trap game possibility here as Alabama's still coming down from whipping LSU in Tuscaloosa last week, and now here's a road game as the team looks ahead to the Iron Bowl in a couple weeks. And Mississippi State, while 4-5, has taken those losses against beastly competition: Oklahoma State, Auburn, LSU, South Carolina and Texas A&M. All ranked. But sheesh, MSU was only close in the Auburn game (its 51-41 margin against A&M vastly overstates the competitiveness of that one) and Alabama is in rare air this year. It's the SEC at night in November, so don't dismiss this completely, but the cowbells may not be clanging for long.

• What we know about the Jameis Winston story right now

• Is 2013 Alabama up to the Saban dynasty standard?