The only thing that's stopping Jameis Winston from winning the 2013 Heisman Trophy is Jameis Winston. Or Johnny Manziel completely outdoing himself.

Jameis Winston had another off week last week, but this one was truly off. He had just 159 yards through the air, threw a bad interception (while trying to get his backup tight end his first catch of the season), and was generally not the reason Florida State beat Wake Forest, as the Seminoles torched the Demon Deacons thoroughly. (QBR is generally a stupid stat, but it's worth noting that the Wake QB with the best QBR on the week was the one who completed one pass for a loss of three yards.)

And yet Winston went from second place in the Heisman race to a Secretariat-style lead.

Last week, I wrote about how Winston's candidacy, like Florida State's national title chances, hinged on Marcus Mariota and Oregon stumbling. Against Stanford, Mariota and his merry band did just that, to the point that I don't see a scenario in which Mariota could hoist the Heisman. Exeunt Mariota, pursued by nerd-bears; enter Jameis, pursued by little more than his own shadow, with Vegas just about convinced he's going to win the Heisman.

If Florida State makes the BCS National Championship Game, an event that requires only four more wins from the 'Noles, Winston will enter it as the reigning Heisman winner, barring an unthinkable injury. And even an injury might not be enough to derail Winston, as long as FSU keeps winning. He's now what Mariota was, but more exciting and with less competiton. That's a recipe for a Heisman runaway.

And yet there's this kid in Texas who won't be giving up his grip on the Heisman without a fight.

Johnny Manziel's Heisman candidacy relies on two things: 1) Winston losing, which would make Manziel a near shoo-in; 2) an incredibly compelling statistical case that makes Winston's year look like a stint as caretaker of Florida State's offense, rather than its engine. The former is unlikely; the latter, thanks to a porous A&M defense that cost Manziel a shot at the Mariota/Winston front-runner's perch, is possible.

Manziel's having a tremendous year, one that gives him gaudier stats than nearly all of his Heisman competition. But he's behind his own pace from last season, when he averaged 393.5 yards of total offense per game. Manziel is averaging 392.4 yards of total offense per game in 2013, and though he's become a far more efficient and dangerous passer (thanks in part to Mike Evans and the rest of a brilliant receiving corps), that's siphoned off his rushing yards (108.5 per game in 2012; 61.1 per game this year), producing a less unusual portrait of greatness.

To be fair, Manziel is fractionally ahead of his pace from 2012 when one removes his 516 yards of total offense in the Cotton Bowl against Oklahoma, which wasn't part of the Heisman window. (Manziel averaged 383.3 yards per game over his first 12 games in 2012, before getting about a tenth of his 5,116 yards of total offense against the Sooners.) But few Heisman voters are going to compare his stats in that way when voting Winston first and Manziel second feels like a more satisfying outcome.

Manziel's task over the his final two games, then, is to put on shows against two top-flight SEC teams, LSU and Missouri, in spectacular wins that give Heisman voters pause. And still, I don't think that gets Johnny Football into Archie Griffin's single-occupancy penthouse. It would narrow the gap on Winston considerably if Winston doesn't match Manziel's magic, but it's not going to help Manziel overtake him. 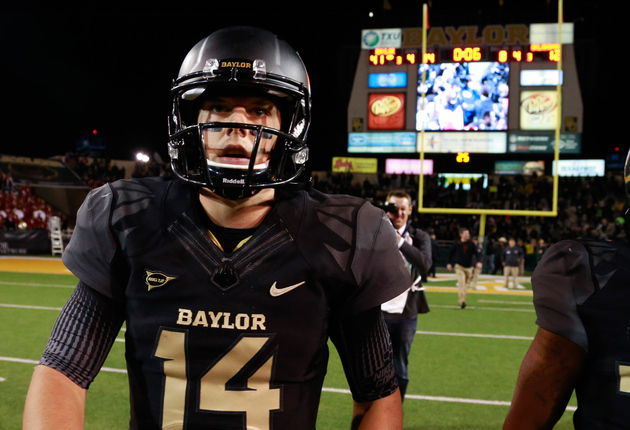 AJ McCarron's line against LSU was just about a 10th of his seasonal stat line entering last week (145-for-209, 1,862 passing yards, 16 TDs), and it was boring. I'll remember his missed throws just as well as his makes, and remember that Alabama's long pass play of the night involved O.J. Howard running for most of the 52 yards after the catch. McCarron's candidacy is still alive because Winston and Manziel aren't in the clubhouse yet, but neither guy looks likely to van de Velde away their lead.

Bryce Petty, meanwhile, was good in Baylor's stomping of Oklahoma ... but Stanford's stomping of Oregon made it really, really easy to switch away from the whacking in Waco at halftime, or earlier. And Petty was good, but decidedly not great, through the air, completing just 50 percent of his passes and making it easy to discredit a 204-yard, three-touchdown performance for voters too busy or lazy to find the box score and his two rushing touchdowns.

Petty should have a better shot at Heisman votes than McCarron — maybe some Big 12 folk give him a bunch of second-place votes? — but neither has a particularly good shot at the trophy.

Jordan Lynch needs to be magnificent in MACtion over the next two weeks, or he's got no shot at Times Square photo ops.

And, really, Lynch needs at least one candidate ahead of him to slip up. Realistically, he's off the board to win it all at this point, and I'm only leaving him in this category because he's done nothing to fall entirely out of the discussion, and there's still enough time to profit from others' failures. He'll probably move down next week without a fantastic showing on Wednesday against Ball State.

Farewell, sweet Hawai'ian prince. The front-runner's sheen is gone, the reflected glory of Oregon's spectacular offense is gone, and the chance of winning it all is gone.

The key statistic for Mariota this season? His eight fumbles, which tie him for eighth nationally. Two of his three against Stanford, the ones that the Cardinal recovered, came within 25 yards of the end zone.

The Heisman of the Week

I tried to find another candidate for this, really, but no one had a cooler or more outstanding performance than Jack, who was the difference for UCLA in the Bruins' win over Arizona, and is now the reigining Pac-12 Offensive Player of the Week despite being a linebacker.

The FCS Heisman of the Week