Alabama fans, like everyone else, have taken up chanting, "We want Bama." So let's see how this year's team compares to others in the recent dynasty. Interesting strengths and weaknesses emerge, plus this year's Tide have tougher competition.

The Crimson Tide have perfected the art of ending the game, almost like a professional wrestler's series of finishers -- Hulk Hogan's body slam/leg drop series, et al. Once Alabama gets a lead, you know the Tide will run the ball, grind out clock, and keep adding to the lead, and there's nothing you can do about it. It's over, but you still have to wait for the end.

Alabama executed a picture-perfect, finishing-moves win over LSU last Saturday in Tuscaloosa. The Tide had to fight to get a lead, then quickly turned a seven-point advantage into a 21-point advantage and left Verne Lundquist and Gary Danielson to talk about women and advanced stats for the final minutes of the broadcast. An interesting game turned into a formality rather quickly.

When Nick Saban's squad left College Station on the evening of September 14, the Tide had quite a few question marks. The running game wasn't working (and wouldn't in the weeks to come, either), and the cornerbacks had plenty of questions to answer after getting incinerated by the Johnny Manziel-to-Mike Evans combination. Despite holding on for a rather impressive 49-42 win over Texas A&M, the Tide appeared vulnerable. They do not anymore.

Since Bama has turned back into the Untouchable Tide in the last couple of months, it might be worth it to compare this Alabama squad to recent versions. With a healthy amount of data in the Excel files, how do the Tide stack up against the Tide as they plod toward a potential fourth national title in five seasons?

I'll include 2010's stats below as well, even though Alabama finished only 10-3 (the shame, the horror) that season.

(Warning: Data ahead. Definitions for all offensive and defensive categories below can be found here.)

The Saban era has been defined by defense. Well, defense and championships. But the Tide's run to titles has come as much because of extreme offensive competence. Alabama ranked in the Off. F/+ top 5 in each of its title years (even in 2011, when its 9-6 regular-season loss to LSU was the exception, not the rule). The Tide are off of the pace a bit this year.

Alabama is lacking a bit in the big-play department.

From a run-pass standpoint, Alabama's offense is exactly what it was in AJ McCarron's previous two seasons as starter (and title-winner). Alabama runs slightly less than 60 percent of the time, right at the national average, on standard downs and plays it relatively safe on passing downs.

Compared to previous years, Alabama is lacking a bit in the big-play department. Whereas the Tide ranked in the top four each of the last four years, they are just 14th this year. Again, that's good, but not elite. Alabama's top three receivers averaged 15.9 yards per catch last year; this year, they're averaging 12.8. Star wideout Amari Cooper has only recently hinted at full-strength play after some early injuries. A late breakout would aid Alabama's explosiveness. Meanwhile, the run game struggled at times in September, averaging 2.5 yards per carry against Virginia Tech and 3.1 against Colorado State. Since Colorado State, however, the Tide have averaged 6.4. Problem solved, perhaps.

What about line stats?

As one would expect in replacing nine years' worth of starts from Barrett Jones, D.J. Fluker, and Chance Warmack, Alabama's line has regressed in both run-blocking and general meanness. Again, the Tide are 11th and improving, but unless they keep improving, this will be their worst Adj. Line Yardage ranking in this run.

Of course, this is also the most successful pass-blocking unit. Some of that could have to do with McCarron's experience, not to mention the quicker passing he has done (there's sometimes a positive side-effect to averaging fewer yards per completion). Still, McCarron, the pass protection, and opponents' preoccupation with Alabama's run have led to a pretty clean pocket.

Sack rates, by the way, are one of the only signs of weakness on that 2010 team. For the most part, that Alabama squad was as good as the others. 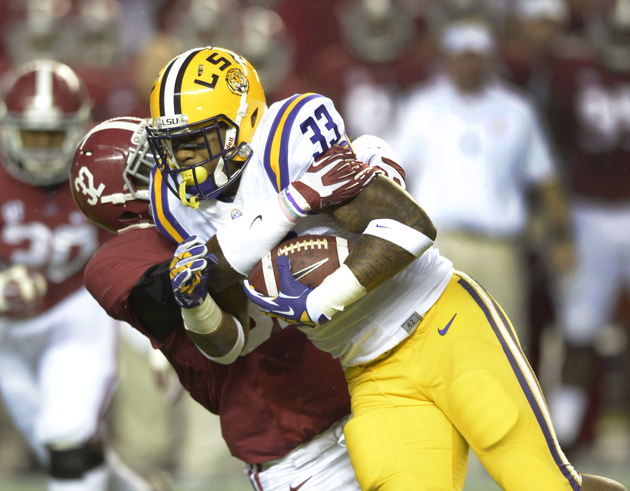 In 2010, despite Alshon Jeffery's exploits when South Carolina beat Alabama, the Tide's minimal weaknesses showed in defending the run. The 2010 defense was inexperienced up front, and it showed. That hasn't been a problem since. This time around, Alabama has shown a few more weaknesses in terms of shutting down drives on passing downs. Again, these weaknesses aren't truly weak, but they're not inescapable units of domination either.

Alabama has never placed a premium on pressure. The Tide will let you gain two yards any time you want to, basically, but their ability to swarm and gang tackle (with athletes who are bigger and faster and meet you with a harder thud than most) will weaken you as a game progresses.

Still, while this typically isn't a top-10 pass-rushing unit, it's usually more effective than this. Only two players (backup end A'Shawn Robinson and starting JACK linebacker Denzel Devall) have logged more than one sack in 2013, and this can't be entirely by design. While the cornerbacks got a lot of the criticism for getting burned against Texas A&M, the pass rush is the primary reason why Alabama's got its worst Passing S&P+ ranking of this title run.

Of the remaining known opponents on the schedule, however, only the SEC East champion, be it Missouri (with James Franklin and company) or South Carolina (with Connor Shaw and his magic), could properly punish Bama for this relative weakness in pass defense. Auburn certainly can't.

(Definitions for the special teams terms below can be found here.)

Special teams almost cost Alabama a shot in the title game in 2011. It's also making the Tide No. 1 in the current F/+ rankings. Christion Jones is just about the best return man in the country this year; he's averaging over 30 yards per kick return and over 12 yards per punt return, and he's taken two returns back for scores. Alabama's been a bit unlucky in terms of the number of field goals its opponents have made, but that hasn't cost the Tide just yet. In all, this is a tremendous unit, and it has helped to shore up some relative weaknesses on offense and defense.

There's another factor worth looking at when we compare Alabama's team to previous championship squads: the caliber of Alabama's BCS title competition.

The depth at the top of college football this year is rather remarkable. Baylor, the No. 4 team this year, grades out better than Alabama's 2009 squad did. And while Alabama's overall ratings (powered in part by special teams) are reasonably comparable to those of the last two seasons, the Tide's competition at the top is quite a bit stiffer. Florida State is almost as good as 2011 LSU (which did go 1-1 against Alabama, by the way), Stanford and Baylor are significantly better than previous No. 3s and No. 4s, and No. 5 is better than any previous No. 4s as well.

Obviously we don't know what, if anything, will come of the new Jameis Winston situation, but it's still probably safe to say that whoever Alabama might face in the BCS title game -- assuming the Tide get past Auburn and the SEC East champion, of course -- will be of a higher caliber than either 2012 Notre Dame or 2009 Texas, at the very least. It would be difficult to pick against a Saban team with a month to prepare, if Alabama gets to the title game, but the competition will be pretty fierce.

• What we know about the Jameis Winston story right now

• Art Briles inked by Baylor through 2023