After Auburn's last-gasp, 43-38 win over Georgia, the Tigers are 10-1 and two weeks away from an SEC West-deciding contest against No. 1 Alabama. The Crimson Tide took care of business -- albeit in sloppy fashion -- Saturday against Mississippi State with a 20-7 win, and they're one victory over Chattanooga away from entering the regular-season finale at 11-0. Gus Malzahn and Nick Saban have their teams in position for the Iron Bowl to end all Iron Bowls. 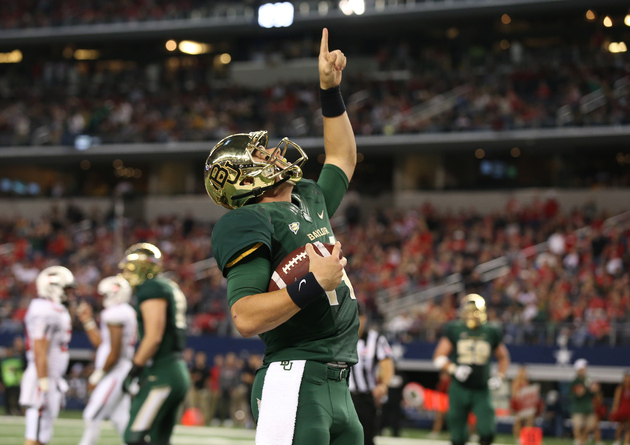 If neither Alabama nor FSU loses, that's still your title game. Ohio State remains the next team up for now, but Baylor should gain ground in both the polls and the computers after pounding the formerly-ranked Texas Tech.
Mid-majors Fresno State and NIU will still be in great shape -- the higher-ranked of the two that finishes within either the top 12 or the top 14 (if also ahead of an AQ-conference champ) is guaranteed a BCS bowl, if one of them can pull it off.
The potential for Duke to join the standings is a storyline worth talking about. After the Blue Devils' 48-30 win over Miami, they have a great opportunity to win the ACC Coastal.

The annual rivalry game has featured plenty of national-title implications in recent years -- Alabama and Auburn have combined for the last four national championships -- but never has there been so much to gain for both teams at the same time. They will have the best combined record since 1994, when 10-0 Alabama defeated 9-0-1 Auburn, 21-14. Even in that game, the Tigers were on probation and not in position to win a championship. This time around, the winner will advance to the SEC Championship Game. An SEC title would give the Tide a shot at their third straight BCS win. Auburn likely would need some help, but the 12-1 conference champs would likewise have a chance to play for their second national championship in four years.

Depending on who you ask, the Iron Bowl is already the best rivalry in the country. With the added juice, the 2013 edition should be one of the biggest games of the year, perhaps the biggest.

How far will Stanford fall?

After knocking off Oregon and taking control of the Pac-12 race, the Cardinal lost to an unranked opponent for the second time this season and promptly lost control of their conference race. They were ranked fifth in the Coaches and AP (the latter of which doesn't count toward the BCS) polls before their loss at Utah, and afterward fell to 13th in both sets of rankings.

Stanford shouldn't fall quite so far this time, considering it should still have good computer numbers and voters are unlikely to slot it behind a UCLA team it beat. And the cluster with Fresno State and Northern Illinois should provide a buffer for a Stanford drop beyond No. 13; the Cardinal did beat Oregon, after all.

The Bears still have their season-ending showdown against Texas, and the Cowboys have their finale against Oklahoma, but this could be the game that decides the Big 12 title. Baylor, with its high-powered offense, has been the conference's best team all season, and Oklahoma State has emerged as the second-best team. The winner will control its destiny in the Big 12 race.

Here's your de facto Pac-12 South title game. The Sun Devils enter with a one-game lead, but a Bruins victory would give them the tie-breaker advantage. Both teams end the season with rivalry games -- Arizona and USC, respectively -- but both should be favored. Either Arizona State or UCLA will likely face Oregon in the Pac-12 Championship Game.