No. 4 Baylor tangles with No. 10 Oklahoma State, we get four other games between ranked teams, and the undercard is full of interesting matchups.

Note: We've removed weeknight games that have already happened, for your convenience. 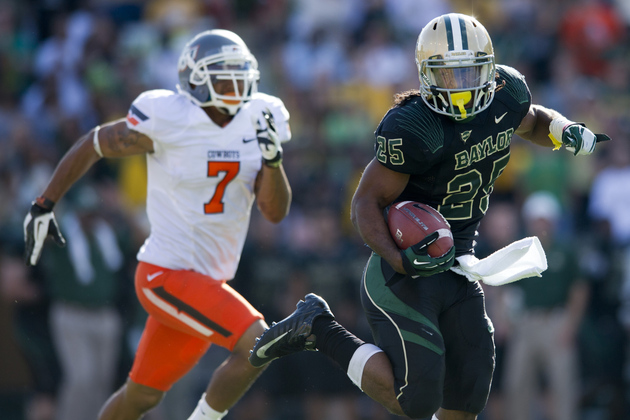 The Spartans are starting to rocket up the BCS standing s —overdue, sure, but it's where you are in December that counts — and you'd think Northwestern, winless in the Big Ten, would pose scant resistance to the Spartan machine. And yet, Northwestern's last four Big Ten losses have been by a total of 21 points, with two going to overtime and a third being lost on a Hail Mary. The Wildcats took Ohio State to the absolute limit in Evanston in October, and with Kain Colter in the backfield the Wildcats just might be able to move the ball on MSU.

Plan B: No. 20 Oklahoma at Kansas State

It's hard to believe this is Oklahoma, still ranked but often looking neutered and ineffectual on offense, particularly through the air. KSU is bouncing back from a rough September and can lock up a winning season both in the Big 12 and altogether with a win here, although with Kansas waiting to finish the year it's kind of okay if the Wildcats lose this one.

Keep it in mind: Michigan at Iowa

It's two bowl-eligible, borderline competent teams from a major conference. In the noon slot. It's not like we're passing up the opportunity to watch Alabama-LSU II here. Serious postseason implications for both teams here (if not the Big Ten Championship race), and if Michigan's not careful Iowa's going to jump ahead of it on the bowl totem. Also, Michigan is horrendous on the road, so you're probably bound to see at least a couple "what are they even doing?" plays.

In case of emergency: The Citadel at No. 7 Clemson

What did the The Citadel ever do to you, Tajh Boyd?

There's no SEC Championship positioning at stake here, but this should be a great game all the same. LSU is the highest-ranked three-loss team in the nation, and it's pretty easy to figure out why with its ferocious schedule. Texas A&M can move the ball on anybody, and Johnny Manziel would like to remind America that he still very well could be the best player in the nation. This should be a heavyweight fight, and it will be a treat to see Manziel and Les Miles going at it on national television, where both thrive in the spotlight. Giddyup.

Minnesota is the darling of the Big Ten this year, coming out of nowhere to start 8-2 (4-2) and being the last team standing in the way of Michigan State in the Legends Division. But the battle for Paul Bunyan's Axe (bring back the Slab of Bacon!) might be where Minnesota's fairy tale goes sideways, as the Badgers are criminally underrated at No. 19 and capable of running the Gophers off the field. Then again, Jerry Kill must have had this game circled on his calendar all year long, and the Gophers' magnum opus may just now be at hand.

Keep it in mind: Indiana at No. 3 Ohio State

Ohio State knows full well it's in a fight for its BCS Championship life with Baylor lurking, and Indiana's paper towel defense is the perfect opportunity to roll up a huge win to impress the voters, who like points and shiny objects. And yet... last week's Illinois game was that opportunity too, and the Buckeyes fell asleep after going up 28-0, eventually winning 60-35, but so unconvincingly that Baylor nearly passed OSU in the standings. The Hoosier offense is eminently capable of throwing on Ohio State — will it put up enough points to make this a game?

In case of emergency: No. 5 Oregon at Arizona

It's going to take an act of God to get Oregon back in the national championship hunt, but past that, the Ducks will be happy to reclaim the driver's seat for the Rose Bowl, which they can do against Arizona. Rich Rodriguez's team has been feisty this year, but we're talking about a 6-4 team with zero big wins. This one could be close for a while, but Marcus Mariota and company should be fine.

Best option: No. 4 Baylor at No. 10 Oklahoma State

For Baylor, this is it: a win here likely vaults the Bears into the top three of the BCS and puts them first in line for the championship if Alabama or Florida State loses. If Oklahoma State wins, though, the Cowboys take control of the Big 12 with one game left to play; Baylor would be left hoping for an at-large BCS bid and wondering what went wrong. Even in Stillwater this is a tall, tall task for OSU head coach Mike Gundy and his players, but if anyone's up to it in the Big 12, it's the Cowboys. Game of the week right here.

Two of the most entertaining offenses in the country square off with major Pac-12 South implications. An Arizona State win locks the Sun Devils into the conference championship, while if UCLA prevails, chaos ensues. The scoreboard may burst into flames in this one, and were it not for Baylor and Oklahoma State deciding the Big 12, this would be the week's best game.

South Carolina's a huge Ole Miss fan this week, as a Rebels victory pushes the Gamecocks into the SEC Championship. Even if Mizzou wins here it still has to beat Texas A&M at home to finish the year at 7-1 in the SEC, but going to Oxford and winning under the lights is no small accomplishment itself. This is without a doubt the biggest game in the SEC this week in terms of the conference championship picture, which we're sure everyone expected to hear when they looked at this game three months ago.

In case of emergency: Kansas at Iowa State

We don't know what set of circumstances could lead a person to watch this game over the three listed in front of it. Even if you're a KU or ISU fan, now's about the time you should think about stopping that.

• How Oklahoma State can shock Baylor