The best way to win is to dominate the first quarter, as USC, Wisconsin, Florida State, and others demonstrated this weekend. Also, maybe saying goodbye to Travis Wilson and your weekly Duke amazement.

Days between conference wins for Kansas. (And if we're talking about current conference mates only, it's 1,498 days.)

On November 6, 2010, Turner Gill's Jayhawks ripped off one of the most random, dramatic comebacks in recent history, scoring 35 points in the fourth quarter to turn a 45-17 deficit against Colorado into a 52-45 win. James Sims, then a freshman, rushed for 123 yards and scored three of KU's five final-stanza touchdowns. Almost three years later to the day, Sims rushed for 211 yards and three touchdowns in a jarring 31-19 win over West Virginia. It was just the second win for the Jayhawks in 20 games vs. FBS teams in the Charlie Weis era, but you know what? When you go that long between conference wins, I can't even make fun of you for tearing down the goalposts after a win against an awful team.

And yes, WVU, this is indeed rock bottom. Well, maybe. A humiliated Colorado squad returned home and won its next two games after the loss to Kansas ... and then dropped 22 of its next 26 games.

Career pass attempts for Utah's Travis Wilson. That might be the final total for the sophomore, whose career might be over after the discovery of a "previous injury to an intracranial artery" during a concussion test. If the artery remains stable, he could return to action, but it's far from a given.

As I've written recently, Wilson's play has fascinated me this year. A 6'7, 240-pound former four-star recruit, he proved to be quite a gamer, lowering his shoulder for extra rushing yards (114 non-sack carries, 607 yards, nine touchdowns for his career) and showing no qualms about trying to throw into tight windows downfield. The upside has been clear ... and so has the downside. He has thrown 22 interceptions to 23 touchdowns and took 31 sacks in 472 total pass attempts.

Hopefully he comes back -- he's incredibly fun to watch, for better or worse -- but only if all health risks are minimized. Get well, Travis. 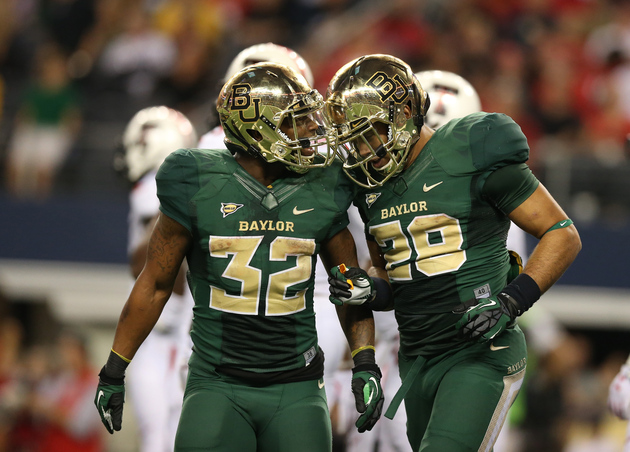 Yards gained in their first three possessions by Ed Orgeron's USC Trojans in an eventual 20-17 win over Stanford. USC averaged 7.6 yards per play (and was aided by two face mask penalties) and scored 17 points right out of the gates ... and then gained 128 yards (3.2 per play) and scored three points the rest of the way.

Trojan backs Javorius Allen and Tre Madden combined for 37 yards on 22 carries, but the early points held up, in part because of two bad interceptions by Stanford's Kevin Hogan. On the first, he misread the coverage and was easily picked off by Dion Bailey at the USC 8; on the second, he apparently misread his arm strength and was intercepted throwing into coverage by Su'a Cravens. Both were costly: The first ended a golden go-ahead opportunity, and the second set USC up near midfield for the Trojans' last-second field goal drive.

TCU took the opposite approach against Kansas State, and it almost worked, too. The Horned Frogs, grounded most of the season by a banged up, mostly inept offense, lived down to their poor offensive ratings by gaining 104 yards in their first six drives, turning the ball over once and going three-and-out four times. But an early injury to star safety Ty Zimmerman caught up to KSU; TCU gained 246 yards after the slow start, scored touchdowns on four consecutive possessions, and with two minutes left, the Horned Frogs took a 31-30 lead on a 56-yard bomb by kicker Jaden Oberkrom. Of course, KSU responded with a 41-yard Jack Cantele field goal with three seconds left, but TCU's offense showed signs of life for the first time in weeks. Too bad it's too late -- at 4-7, TCU will miss a bowl for the first time since 2004, Gary Patterson's fourth season in charge.

Yards gained by Oklahoma in a dreadful first half vs. Iowa State. Starting quarterback Blake Bell got hurt, backup Trevor Knight started slow, and only a 91-yard punt return touchdown by Jalen Saunders kept the Sooners even with the Cyclones, 10-10, at halftime.

Yardage lost by Pittsburgh to sacks in a 34-27 loss to North Carolina. A cursory glance at the box score points you to Pitt's poor rushing totals (46 net yards!) as a potential reason for the Panthers' loss. But running backs James Conner and Isaac Bennett rushed for 128 yards; the problem was that, despite completing 23 of 38 passes for 313 yards, Tom Savage couldn't stop going backwards. He was sacked seven times and averaged just 5.0 yards per pass attempt (inc. sacks). Consider this Exhibit 2,324 for why sacks should be counted against passing totals. In games like this, current practice makes the box score almost irrelevant.

Savage was not alone in his sackdom, however. Against Maryland, Virginia Tech's Logan Thomas completed 19 of 31 passes for a decent 210 yards and two scores and wasn't picked off even once ... but he was also sacked six times for 44 yards and averaged just 4.5 yards per pass attempt (inc. sacks) because of it. Sacks are often the fault of the quarterback, and Thomas has shown some sack-taking tendencies over the years, but considering the Hokies' problems running the ball on Saturday -- running backs carried 21 times for 74 yards -- one can probably pin a lot of the problem on the line.

Temperature at kickoff for Hawaii's eventual overtime loss to San Diego State on Retro Night on the islands.

But hey, it was "mostly cloudy," too, so maybe wherever you were was better. Whatever you need to tell yourself. 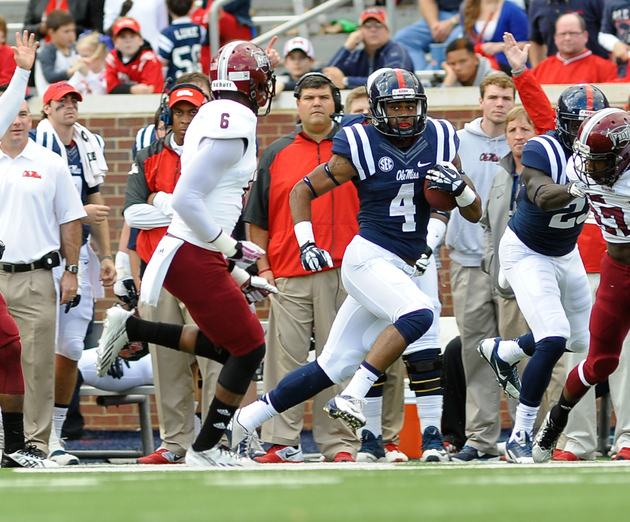 Years for which Ole Miss' single-game total-offense record stood. On November 10, 1951, the Rebels gained 623 yards in a 39-14 win over Auburn. Sixty-two years and six days later, Ole Miss left that record in the dust, gaining 751 yards (8.1 per play) in a 51-21 win over Troy. Granted, Troy's defense is wretched (121st in Def. F/+), but almost everything the Rebels did worked. Bo Wallace averaged 10.5 yards per pass attempt, seven players rushed for between 46 and 66 yards, and eight players gained between 24 and 81 receiving yards. The only reason Ole Miss stopped at 51 points is because the Rebels failed to score on four trips into Troy territory. It could have been quite a bit worse.

Points allowed by Syracuse's basketball team in a Saturday night win over Colgate. The Orange football team allowed that in 37 minutes against Florida State.

East Carolina's current F/+ ranking. For a frame of reference, Michigan is 34th, Iowa 35th, Boise State 36th, Florida 39th, Nebraska 43rd, and Texas 44th. ECU is proving that experience can indeed matter quite a bit; the Pirates rank in the top 40 in both offense and defense. Thanks to an overtime setback to Tulane (back when Tulane was playing solid ball), the Pirates will probably have to be win at Marshall in a couple of weeks to reach the Conference USA title game. Still, it's been a hell of a season for Ruffin McNeil's 8-2 squad.

Approximate minutes it took for Wisconsin to surpass Indiana's full-game yardage total in a 51-3 Badger win over the Hoosiers. For the game, a relatively potent Indiana offense gained 224 yards in 60 plays. In their first 23 plays, the Badgers gained 259. And then they just kept right on going, gaining 676 yards (10.4 per play!) for the game. James White, Melvin Gordon, and Corey Clement combined for a downright unrealistic 459 yards in 44 carries.

In its last four games, the Indiana defense has now allowed 191 points and 2,612 yards. For the season, four offenses have yet to gain 2,612 total: Florida International, Miami (Ohio), Purdue, and South Florida. And on November 30, Purdue and Indiana face off. Movable object, meet resistible force.

By the way, it took Boston College's Andre Williams just seven minutes to surpass N.C. State's full-game rushing yardage on Saturday as well in a 38-21 BC win. The Wolfpack gained 35 yards, 57 if you remove sack yardage. Williams had 71 yards after three carries. (And then he gained another 268 in 39 more carries.)

Yards per play averaged by Nebraska in a surprisingly high-scoring 41-28 loss to Michigan State. For as much press (and statistical love) as the MSU defense has earned, the Spartans were gashed at times by the Huskers, who averaged 5.7 yards per carry on the ground and 6.6 yards per attempt through the air. State managed no sacks and just three tackles for loss overall, and only two of Nebraska's six fumbles were forced. That Nebraska indeed fumbled four times made the difference, but the State defense that played in Lincoln won't beat Ohio State if (when) the two face off in the Big Ten title game.

Three-and-outs by Illinois in a strange 60-35 loss to Ohio State. This was a confusing game all around; on four touchdown drives, the Illini gained 280 yards in 34 plays (8.2 per play). In all other drives, they gained 140 (2.6). Illinois had gained just 82 yards in 22 plays while Ohio State established its patented big early lead, and things were still miserable enough in the third quarter that head coach Tim Beckman and offensive coordinator Bill Cubit needed to be separated on the sideline.

But to the Illini's credit, they kept pecking away. They raised further questions about Ohio State's defense, though since most of the damage was done in garbage time, it didn't affect the Buckeyes' ratings that much. That the Buckeyes fell from fifth to eighth in F/+ says more about the performances of two teams that passed them (Oregon and Wisconsin).

Winless teams remaining at the FBS level. Georgia State, Hawaii, Miami (Ohio), and Southern Miss are all 0-10, while UConn is 0-9.

Hawaii is the interesting one here. The Rainbow Warriors actually rank a semi-healthy 83rd in the F/+ rankings thanks to a downright decent defense, but they are 0-4 in games decided by one possession (granted, they've mastered the art of the garbage-time charge), have lost two others by 14 points, and remained competitive most of the way against both USC and Oregon State. Norm Chow's tenure at Hawaii has been abysmal -- his record is now 3-19 -- but the Warriors have shown clear signs of progress this season, believe it or not.

Consecutive games in which Wyoming has allowed at least 500 yards. And it appears the offense has given out amid this Indiana-like defensive performance. In the first eight games, the Cowboys gained 516 yards per game. In the last two combined, they've gained 561.

Miami could not figure out how to stop a Duke ground game that usually stops itself just fine.

Before Saturday, this was the number of times in the David Cutcliffe era in which Duke had gone over 250 yards rushing. That came on August 31, when the Blue Devils gained 257 on poor N.C. Central. But Duke absolutely steamrolled Miami late, rushing for 358 yards against the Hurricanes. Josh Snead, who had just two career 100-yard rushing games, went for 138 yards in just nine carries; Jela Duncan, who had just two games over 75 yards, went for 98 on 16 carries. Shaquille Powell threw in 59 yards on seven carries, and quarterback Brandon Connette found the end zone four times. Miami needed a couple of stops to get back in what eventually became a 48-30 loss, but the Hurricanes could not for the life of them figure out how to stop a Duke ground game that usually stops itself just fine.

And here's my opportunity to once again point out that if Duke wins out against Wake Forest and (a smoking hot) North Carolina, the Blue Devils will make the ACC title game. In football. You're incredible, Coach Cutcliffe.

Ohio's scoring margin over its last two games. Two weeks ago, the Bobcats were 6-2 and firmly entrenched in the MAC title race. Then they lost 30-3 to Buffalo. And then they lost 49-0 to Bowling Green, getting outgained by a 460-172 margin. Either midweek MACtion or the month of November is not treating Frank Solich's too-experienced-to-be-getting-drubbed squad very well.