The Hurricanes are losing, and have also lost one of their star offensive contributors.

Update: No official word yet, but his mother has confirmed the report.

Source close to situation tells Miami Herald that #UM RB Duke Johnson has broken his ankle and is out for the season. Surgery next week.

Miami Hurricanes star running back Duke Johnson will not return to the game after suffering what looked to be a serious injury to his right leg during the Hurricanes' Saturday night game against the Florida State Seminoles.

Down 35-14 late in the fourth quarter, Miami elected to go for it on fourth-and-two from the Seminole 26. Johnson got the carry up the middle but was stuffed, turning the ball over on downs. The pile of bodies landed awkwardly on his leg, and Johnson had to be helped off the field.

Duke in tears...right ankle being looked at

Here's an image of the injury itself: 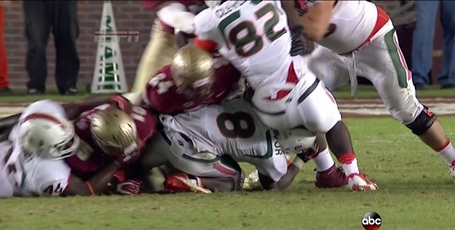 Johnson entered the game with 122 carries for 823 yards and six touchdowns, and was second in the conference in rushing. On the day, he had carried the ball 23 times for 97 yards, and has been one of the more consistent parts of the Hurricane offense against the stout Seminole defense.

• Check in with your team’s site here