The odds are certainly in Alabama's favor in this Saturday's SEC West championship rivalry game. But let's take a look at what Auburn needs to do to pull an upset.

Share All sharing options for: 5 things Auburn needs to upset Alabama in the biggest Iron Bowl ever

Spoiler alert: In one of the biggest games in the history of one of college football's biggest rivalries, we have a pretty good idea of who's going to win. Alabama has been superior to Auburn for almost the entire 2013 season, and as I mentioned yesterday, my own projections give the Crimson Tide about a 78 percent chance of winning Saturday's Iron Bowl in Auburn.

If Alabama wins, the reasons will be pretty obvious. Nick Saban's Tide have a talent advantage over almost anybody (and while Auburn has recruited well enough to compete, Alabama has the experience advantage, too). And in 2013, they have one of their best run-stopping fronts of the Saban era, not to mention an offense that is explosive early and methodical late, plus a special teams unit that is by far the best in the country.

Alabama dramatically tilts the field in its favor, makes more big plays than you, wears you down and breaks your will. As I've said before, Alabama wins typically end up like a professional wrestling match: once the Tide get the advantage, they start their series of finishing moves, then bear hug you until you're unconscious. You know it's coming -- you know the big boot to the face sets up the leg drop -- and you can't stop any of it.

You know the big boot to the face sets up the leg drop -- and you can't stop any of it.

Okay, so there's your "What's most likely to happen?" preview, basically the template for every Alabama game.

So let's talk a bit about the other 22 percent. If these two teams played 10 times, Alabama might win about eight of the games. But Auburn only has to win once. If the Tigers pull off a magnificent, script-flipping upset, how does it happen? What checkpoints will they have successfully navigated through to have ended up in the land of the 22 percent?

Alabama's typically a good field position team simply because the Tide will force more three-and-outs than you can. Give them an untouchable special teams unit and it's just unfair. They're going to start their drives at the 35 (or better), you're starting yours at the 25 (or worse) and there's little you can do about it.

But Auburn might be able to do something about it. The Tigers are fourth in Fremeau's special teams ratings, with an outstanding return game (Tre Mason on kick returns, Quan Bray and Chris Davis on punt returns) and competence throughout (aside from perhaps kick coverage). Auburn is also one of the country's better offenses when it comes to generating at least a first down or two before punting. Obviously turnovers and other factors play major roles in this, but if Auburn can hold steady, pin Alabama inside its 30 on average and prevent the Tide from doing the same, the Tigers have broken serve, so to speak.

What do the advanced stats say?

Here are some of the key advanced rankings for the Iron Bowl.

A couple of weeks ago, I spent a good portion of my Georgia-Auburn preview telling you how Auburn's offense perhaps isn't well-built for falling behind, either on the scoreboard or in a given set of downs. I don't want to overstate this issue, because the Tigers are still a solid 10th in Passing Downs S&P+, but what I said about facing Georgia goes doubly true about facing Alabama. Auburn is more than competent on passing downs, but Alabama is pretty good at making you incompetent.

Auburn's ability to generate yards on first down will go a long way toward determining the winner of this game. The Tigers executed a perfect game plan against Georgia, running well enough on their first drive (16 plays, 56 yards, field goal), then going pass-happy on their second (six plays, 63 yards, touchdown). They forced Georgia to stay honest, and while the Bulldogs eventually turned the tables as Auburn went into clock-killing mode -- AU's last four drives before the game-winning miracle touchdown pass to Ricardo Louis: three punts, two three-and-outs, and a field goal set up by good field position -- Auburn's early variety and success made for a cushion.

However head coach Gus Malzahn chooses to go about doing it, Auburn will have to employ variety, misdirection and every trick in the book to keep the ball moving forward on first down. If the Tigers can produce a steady set of second-and-4s, they'll be okay. For all of its strengths, Alabama's defense isn't the best in the world at stopping short-yardage, power situations; Alabama won't allow you more than about two or three yards without a fight and a gang tackle from C.J. Mosley, Trey Depriest and company. Auburn can convert on second and third down if it isn't falling behind on first, but that's easier said than done. 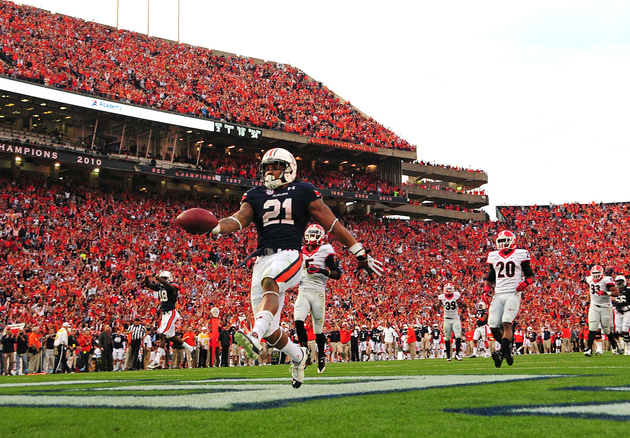 Jabs win rounds. Knockdowns win fights. Or something like that. If Auburn is consistently falling behind schedule, the Tigers have no chance, but even if they're moving the chains they'll still probably need a few big plays along the way, or at least more than they allow.

Both of these offenses are in the top 20 in PPP+ (explosiveness) and in the top 10 in Explosive Drives. They go about generating easy scores in different ways, but they both succeed. Alabama's play-action game is simply deadly; Kevin Norwood, Amari Cooper, and DeAndrew White have combined for 90 catches at 14.6 yards per catch with 12 touchdowns. It's more than that, though. Alabama has proven willing and able to take the ball to the house in whatever manner you allow -- play-action bombs, long runs, perfectly blocked bubble screens, etc.

One of Alabama's biggest advantages in this game is its ability to stop big plays.

Auburn has Sammie Coates ready and willing to go long at any moment. But the Tigers are more likely to gash you on the ground. Nick Marshall is perhaps the best zone-read quarterback in the country right now, and not counting sacks, Marshall and running backs Tre Mason, Cameron Artis-Payne, and Corey Grant have combined to average 6.9 yards per carry on 42 carries per game. Yes, Auburn runs a variation of the spread offense, but the Tigers are more run-prone than Alabama; they're also almost better at the power game, as strange as that may sound to a casual fan.

One of Alabama's biggest advantages in this game is its ability to stop big plays. The Alabama defense is fifth in PPP+ and 11th in Explosive Drives; Auburn is 35th and 84th, respectively. You have to make more big plays than Alabama to win, and the Tide make it very difficult to pull that off. Auburn has to find a way. Count each team's 20-yard (or more) gains, and you'll probably figure out who won.

In this way, my colleague Spencer Hall was exactly right during Monday's Selection Committee: One of the best reasons to believe in Auburn is that Gus Malzahn can and will pull out all the stops. He's had two weeks to prepare, and you have to believe this will be, as Spencer put it, "high school coach Gus Malzahn" opening up the playbook and using misdirection and general funkiness to put Alabama's defense on its heels as much as possible. It might not work -- after all, "You don't win with schemes, you win with football players making plays" -- but … it might work. 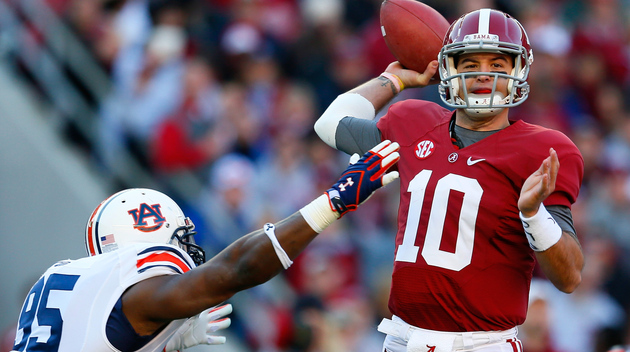 On standard downs, when opponents can either run or pass, Auburn's general inexperience shows a little bit. The Tigers are a pretty placid group on early downs, ranking only 51st in Standard Downs S&P+, sending almost nobody at the passer and attempting to mitigate damages from the opponent's primary strengths.

Now, Auburn's defense has absolutely improved in this regard; the Tigers' ability to take away Todd Gurley on first down had as much to do with Auburn taking a 34-17 lead into the fourth quarter against Georgia (before a subsequent collapse) as anything they did on offense. But Ellis Johnson's defense is still only decent on standard downs, nothing special. Alabama will find ways to poke holes in this defense at times when runs and passes are equally likely.

On passing downs, though, Auburn could change the game. Auburn's defense is one of the nation's best on second- or third-and-long. Senior end Dee Ford flies at the quarterback from one direction, freshmen Carl Lawson and Elijah Daniel (or junior LaDarius Owens) come at you from the other side, and tackles Nosa Eguae, Gabe Wright, and Montravius Adams (another freshman) frequently penetrate the interior of the offensive line. Auburn is able to generate wonderful pressure (ninth in passing-downs sack rate) without sending the house, which allows the Tigers to pin their ears back without becoming too vulnerable to screens and counter punches.

Of course, Alabama's offense is sturdy and explosive on passing downs. The Tide block well, and quarterback AJ McCarron makes strong decisions. There is no guarantee that Auburn will hold the same type of passing-downs advantage that it did against Georgia (especially early on) and most other teams. But if Auburn wins, pressure here is a must. Sack McCarron a couple of times early, and you'll flip the field a bit (remember how important field position is?) and perhaps force a turnover (remember how important uppercuts are?). Auburn isn't going to force a ton of passing downs against this offense, but if the Tigers can take advantage of the ones they get, they'll have a chance. 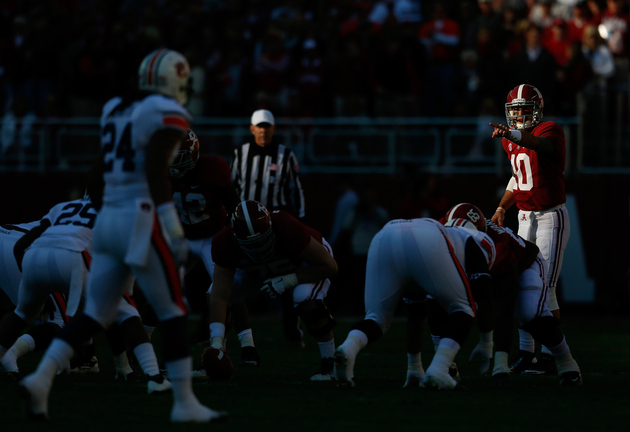 Auburn really shouldn't be here. The Tigers needed clutch, late play to survive home games versus Washington State and Mississippi State in September, and they needed the craziest play of the season to survive Georgia, also at home. They are about three plays from being 7-4 right now, and while that type of record would still represent incredible progress on the Plains, Auburn's ability to survive (and benefit from some good luck) has transformed this season from a strong turnaround to a team-of-destiny situation.

I use numbers too much to believe too heavily in fate or destiny or karma. Still … I'm a fan. And each season, it's hard not to feel like certain teams just have luck on their side. That Auburn benefited from a miracle at the end of the Georgia game made sense, just as it made sense that Georgia would be on the losing end of such a play. Auburn heads into this game having both improved steadily and benefited from some luck. The Tigers will need a little more magic to survive a visit from Alabama, but it certainly feels like they could, doesn't it?

Nick Saban doesn't believe in magic, of course. Again, odds are good that Alabama wins this game because it has the better team, more seasoned players (especially when it comes to playing in big games), and more advantages. But in a nearly unmatchable atmosphere, Auburn isn't going to be that far from turning the probable on its head.

Watch this game assuming Alabama will win, but suspect that Malzahn and his Tigers have a few tricks to pull.

• Maybe the best This Week In Schadenfreude ever